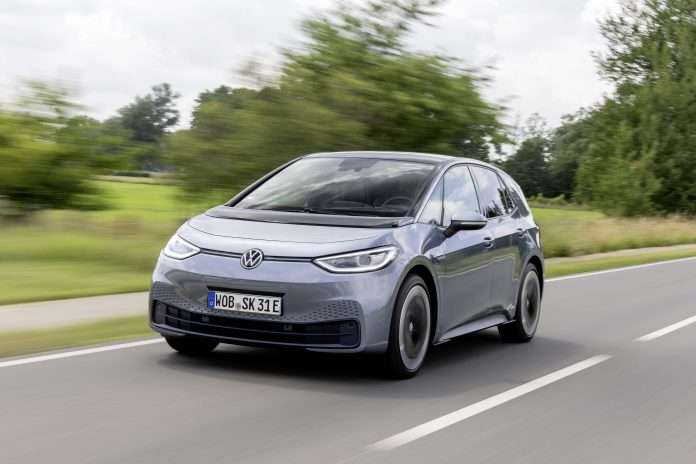 Designed to be an EV for the masses, it’s the first of its new electric ID range to launch, and promises a tempting combination of value, technology and range in a super refined package.

It’s based on the electric MEB platform which you’ll soon see the likes of Audi, Skoda and Seat using, and VW is expecting big things from the electric hatchback: the company says the ID3 is its most important product since the Golf and the Beetle before it.

Any good? Keep reading our review to find out

Volkswagen’s first EV proper is an unassuming 4.2-metre, five-door hatchback designed to bring normality and routine to electric cars. Rather than the outlandish EVs we’re used to seeing, the ID.3 is a new breed; restrained clean lines mean you could mistake it for a conventional car – and that’s no bad thing.

And no, you haven’t missed the first two Volkswagen EVs, VW kicked off its electric ID range with the 3, as the number corresponds to size. With that in mind, the ID.3 has recently been followed by the ID.4, with more models planned to slot around it in the future.

Outside then, the ID.3 is unassuming and almost appliance-like – but things are far more interesting once you jump inside. The ID.3’s interior  moves away from its conventional exterior and doubles down on the key benefits of EVs. The electric VW’s cabin is one of the airiest, most spacious cabins you’ll find on an electric car. Minimalist rather than sparse, the ID.3 groups its tech into pods that seem to float around the cabin.

A small screen – with a gear shifter attached – sits directly behind the wheel and moves back and forth with it, while the Discover Pro Navigation system’s 10-inch infotainment screen hovers on the left. Volkswagen’s ID.Light is a nice feature, and sits between the windscreen and the rest of the interior. Designed to communicate with passengers and help with navigation (by moving to the left or right), it’s more of a pretty-looking welcome light in practice.

Just like the more conventional Golf it may eventually usurp, the ID.3 gets a round wheel, packed with capacitive buttons.

In practice, the ID.3 is super simple to operate – and it feels as though ‘twist-and-go’ has been the ethos throughout. Sit down in the driver’s seat and the car automatically wakes up. Then it’s just a matter of moving to D or B (a heavier regen mode) and setting off.

Like other Volkswagen cars, the ID.3 uses a relatively intuitive OS of VW’s own design – but it’ll play nice – and wirelessly – with Android Auto and Apple CarPlay too. We used a combination of the two and found it particularly good; the ID.3 even fed direction info to the cockpit dials when we were using Android Auto.

The wheel-based capacitive buttons were solid in practice, too. They worked well for infotainment and menu navigation – though it took a little while to implement the ID.3’s fiddly adaptive cruise settings.

Using the touch sensitive air-con controls is another matter; just like the Golf’s system, they use annoying touch sensitive strips. They’re too close to the screen so you’ll find yourself accidentally tapping other bits and pieces – why VW couldn’t use knobs remains a mystery.

The VW ID.3 is available in a range of trims, and this time we drove the EV entry-level Life form. The Volkswagen’s 58kWh battery makes 107kWh of power, so it’s not the fastest on paper. Top speed is 159km/h and it’ll hit 100km/h in 9.6 seconds, but like other EVs, the ID.3 is rewarding at speeds you’d associate with more urban environments.

Part of that is due to its sweet, direct steering, part of it down the ID3’s 310Nm of torque – but it’s also down to the go-kart like chassis VW has given the EV. Rear-wheel drive and with a firm suspension, it’s significantly more fun than you’d expect a 1812kg hatch to be.

The ID.3’s B-mode is particularly interesting, and works to pull extra power back into the battery when you’re not on the throttle. The effect feels like the car is dragging instead of smoothly coasting, but it’s easy to get used to. We found ourselves letting the car conserve energy on the way to traffic or red lights, and our use of the brake was reduced dramatically. And the best bit? If you don’t like it, you don’t have to use it.

When the battery does run out, the ID.3 has rapid charging capability; 100kW charge gives you 190km in just 30 minutes, with 80% capacity coming just 5 minute later. If you’re stuck with a standard 7.2kW connection, it’ll take around 9 hours – which is just about fine for an overnight charge.

The Volkswagen ID.3 isn’t yet for sale in New Zealand, though at least one high-end trim, likely imported car has been seen for sale at NZ $88,000. However, a more accurate price can be guessed by looking at a similarly trimmed Tesla Model 3. Tesla’s entry-level Model 3 costs NZ $66,900 and features a range of 448km. If the ID.3 does make it to New Zealand, expect it to be slightly cheaper than that.

Range is 425km which isn’t bad for this price. A higher-end Polestar 2 uses a 78kWh battery rather than this ID.3’s 58kWh one and puts out 479km as a result. You get what you pay for.

The ID.3 might not be the breathtaking EV on the road; but that’s kind of the point. Volkswagen’s ID.3 is about giving customers the most user-friendly introduction to EVs possible – while also harnessing the benefits that electric power can bring. In that sense, even in the lower trims, it’s already a success.