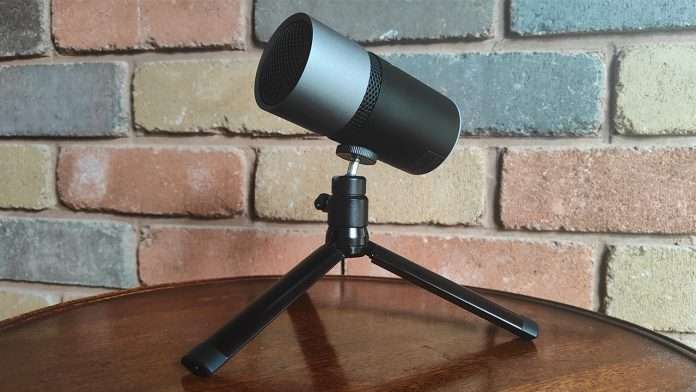 The Thronmax Pulse microphone is an affordable plug and play mic that’s simple to use. It doesn’t require any setup and it performs pretty well.

The Pulse struggles if it isn’t placed directly in front of you, its noise cancellation capabilities feel more like noise reduction and it isn’t great for instruments but for gaming and streaming, it does an adequate job.

The Pulse isn’t going to out-perform the best headsets and microphones on the market but for only $100 you’ll get significant clarity improvements when compared to in-built laptop microphones.

Thronmax’s Pulse microphone is a compact, minimalist mic. It’s only 11.5cm tall and weighs 130g. It doesn’t take up much space on the desk, and it’s light enough to put on a boom arm without issues.

For its price, it’s well made. It has a strong aluminium build, and it feels solid. Impressive for its lightweight.

The Pulse comes with a three-legged adjustable mount that makes it easy to stand on a desk. The mount is also well made, and it makes adjusting the microphone hassle-free.

The Pulse isn’t flashy. It has a simple grey and black colour scheme. It doesn’t look out of place next to a flashy gaming PC or a subtle laptop.

On the back, controls allow you to adjust the volume, mute and turn the noise cancelling on/off. There’s a USB-C port for connecting the mic to your computer, and there’s a headphone jack. Everything you need is here.

There’s also an LED ring that goes around the microphone, which changes colour based on your mode. It’s a nice touch, and I appreciated visually seeing the mode as it helped prevent accidentally finding I’d been on mute after a long Zoom rant.

The Pulse is a simple plug and play device. It doesn’t boast any significant features other than its noise-cancelling abilities. It doesn’t come with specific software, plug it in, and you’re away.

This is a microphone specifically designed for gaming or streaming. And the results are suitable for a $100 microphone. On the back of the box, the Pulse suggests it could be used for recording instruments. I tested this with my acoustic guitar and some very poor singing, and the results weren’t great.

The Pulse’s noise cancellation is more like noise reduction. It won’t block all the background noise, but it will reduce it. It worked best when speaking, but it would pick up some outside sounds if I weren’t.

It performs well as a gaming/streaming microphone, though you’ll probably want a boom arm to get the best sound. I had to have the mic directly in front of me for my voice to come through clearly, (which is to be expected). However, it was difficult to position the Pulse on my desk as my keyboard was in the way. When I placed the Pulse to the side, it picked my voice up well enough to be heard. However, it sounded tinny, and as my voice trailed off at the ends of sentences or statements, the noise-cancellation would kick in, creating an unnatural sound.

If you can find a sweet spot in which the Pulse picks up your voice without cancelling it out, for $100 it’s quite impressive. I compared it to the mic on my $750 gaming headset and the in-built microphone on my Surface Laptop 4. While it couldn’t compete with my $600 more expensive headset, my voice was significantly clearer than when I used my laptop’s in-built microphone.

The Thronmax Pulse is a plug and play microphone that doesn’t have any standout features. But it’s simple to use, well made and affordable.

While it doesn’t compete with the top of the range headsets or microphones, it’s a lot better than in-built laptop microphones.

It works best when positioned directly in front, which can make it tricky if a keyboard is in the way, the noise cancellation does sometimes cancel out the speaker’s voice, and it isn’t great for instruments, but as a gaming/streaming microphone, it does a good enough job.

For $100, Thronmax’s Pulse is well worth it. If you don’t want to spend a small fortune on a gaming or streaming microphone, but you want a better sound than your in-built microphone can produce, the Pulse will do a good job.

Facebook
Twitter
WhatsApp
Linkedin
Previous articleThe iPhone 13 will be revealed in one week’s time
Next articleAnalysis: What to make of today’s DDoS attacks on major NZ websites