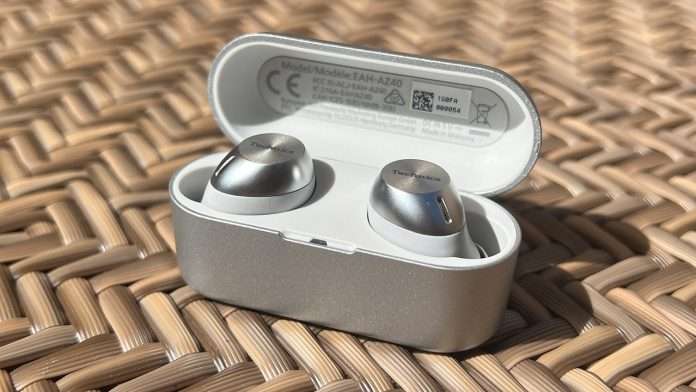 Technics’ AZ40 True Wireless earbuds are (yet another) entry in the mid-range earbuds market – a place where it is already difficult to stand out.

And these earbuds don’t stand out at all. They’re unremarkable earbuds that aren’t different from any other mid-range earbuds.

There isn’t anything unique about the AZ40s. They have an ordinary design, average performance (expected in a $229 pair of earbuds), responsive touch controls and market standard battery life.

Being ordinary isn’t necessarily a bad thing, the AZ40s can do everything you’d expect a mid-range pair of earbuds to do. The problem is, other than their price, there isn’t anything here that would make you pick the AZ40 earbuds over other products on the market.

Technic’s AZ40 earbuds cost $229. This is on the more affordable side.

The AZ40’s aren’t trying to compete with the best of the best. They’re more in line with the $299 NuraTrue earbuds and Panasonic’s RZ-S500W earbuds costing $225..

The AZ40 earbuds have an ordinary design. There isn’t anything here that makes them stand out. It’s not that they look bad, they just don’t bring anything unique or different to the table.

They come in three colours, Silver, Black and Rose Gold. For our review we were given the silver earbuds and they look fine.

Their “bud” shape makes using the touch controls easy. The large circular face is responsive and I never ran into any issues with them. They allow you to pause/play music, skip tracks forwards and backwards, turn the volume up/down, wake your chosen voice assistant and take or hang up on calls. It all works exactly as it should.

I liked the amount of customisation options within the Technics Audio Connect app. You can easily change what you want the touch controls to do and it has all the options you would want.

The earbuds push right into the ear canal. Sometimes I find this style irritates my ears after prolonged use, but I found the AZ40s comfortable.

The audio quality produced by the AZ40 earbuds is what you’d expect from a mid-range pair of earbuds. It’s okay.

The AZ40s boast 6mm full-range drivers. The audio came through clearly, however the mix did sound muddied at times.

The vocals and treble came through louder than anything else while listening to alternative rock tracks like Go by Valley Lodge. This often overpowered the mix making it hard to hear the higher frequencies of the track.

The earbuds also struggle with bass frequencies. The AZ40s don’t produce the punchy bass found in some similarly priced earbuds. Listening to Red Beans & Rice by Michael Franti & Spearhead didn’t have the rhythmic bounce that the song deserves. It sounded muddied and slightly distorted.

To compensate for the lack of Active Noise Cancellation, the AZ40’s can get quite loud. They’re not the loudest earbuds I’ve used, but they go loud enough to drown out someone sitting next to you on a train. At higher volumes though, the audio sounded tinny and sometimes distorted.

The AZ40s only support SBC and AAC codecs, there’s no aptX support here. This feels like a backwards step seeing as there’s plenty of competitors around this price point that support aptX.

Within the app you can EQ the audio to your preferred levels, always a good option to have. However, I found that leaving the earbuds in the neutral state provided the best sounding audio.

There’s also an Ambient Sound control which uses the in-built microphones to pick up outside noise and play it into your ear. It’s fine.

The Technics Audio Connect app has all the features you’d expect on an earbuds app. Ambient sound controls, a five-band EQ , touch control customisation and voice assistant support are all here.

There’s also a “find headphones” function that emits a sound through the earbuds when you can’t find them. However, the sound emitted by the earbuds was so quiet, it was almost useless.

The in-built microphones are a bit lackluster. They picked my voice up easily in a quiet room however they also picked up a lot of background noise as well. Compared to the Jabra Elite 7 Pros microphone capabilities, they’re a long way off the mark.

For phone calls, Technics has included a helpful “Just My Voice” feature which allows you to test how your voice sounds to the other person on the line. It’s a nice feature to have, allowing you to adjust the earbuds to produce a better sound.

This is standard in the industry.

The Technics AZ40 True Wireless Earbuds are the most stereotypical earbuds I’ve used. There isn’t anything wrong with them, there’s just nothing that makes them stand out.

They perform how you would expect a mid-range pair of earbuds to perform. The audio sounds fine but struggles with bass frequencies and finer details like hi-hats.The lack of aptX codec support and the average microphones don’t meet the standards set by similarly priced earbuds.

For $229 the AZ40 earbuds will definitely do the job. If you’re looking for a cheap pair of earbuds to simply listen to music, then they’re a good buy. However for just $70 more you can get the NuraTrue earbuds which have more advanced features like ANC and far superior audio quality.