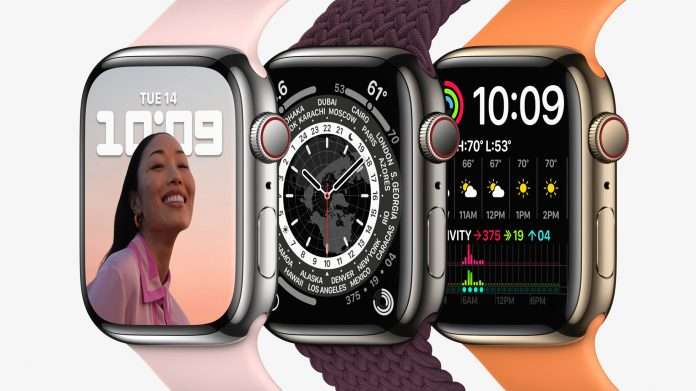 Apple’s trend of evolutionary, not revolutionary, updates continues with the Apple Watch Series 7. It boasts a bigger screen, fast charging, and a very familiar design. It’s also (still) the best smartwatch on the market, with only older Apple Watches providing credible alternatives.

I replaced the Apple Watch Series 6 with the Series 7 a couple of weeks ago, and it’s hard to notice the difference in devices. The improved display is, predictably, the most rewarding upgrade (more on this below). But it’s not a big enough feature to warrant upgrading from the past three, at least, Apple Watches.

What you need to know

The Apple Watch Series 7 comes in two different sizes, 41mm and 45mm – these represent a 1mm jump. It also comes in two other materials, aluminium and stainless steel, and there’s a large selection of bands you can purchase. All of these variables alter the price, and there’s too many to list here.

The aluminium Apple Watch Series 7 starts at $649, while the stainless steel version starts at $1,199.

Anyone who has used or even seen an Apple watch before will immediately be familiar with the Series 7. There isn’t anything noticeably different about its design like rumours suggested there would be.

Apple’s decision to not change its winning formula is probably a pragmatic one, as the 1mm bigger watches will still fit legacy Apple Watch straps.

The real difference with the Apple Watch Series 7 is the display. It’s an always-on display that’s larger, brighter and is edge-to-edge.

Apple has achieved this by trimming the size of the borders – something that hasn’t changed since the Series 4. The new 1.7mm borders look brilliant. Apps and watch faces blend into the device’s edges and slightly curve around, too – making it look like there isn’t an edge.

Most importantly, the bigger screen area has allowed Apple to tweak the size of its buttons. Entering your passcode, using apps, or typing on the new QWERTY keyboard is a more accurate experience because of it.

Apple claims the Series 7 is more scratch resistant and crackproof than the Series 6 due to upgrades and improvements to the front crystal. I’m not brave enough to test this, but it’s a welcome addition for wearers who need a watch to survive more rugged daily scenarios.

The Series 7 maintains its WR50 water resistance rating, meaning you can wear it in the shower or swimming in a pool or ocean without it being damaged.

It now has an IP6X resistance rating which means it’s dustproof – an important feature for those working in the construction trade.

The Apple Watch Series 7 doesn’t introduce many new features. It comes with the new watchOS 8, which enhances old features for the new larger display (rather than introducing new ones).

The Series 7 has the same powerful health tools like the ECG app and the blood oxygen sensor, the Apple fitness apps, Spotify* integration and these work just as good as they always have.

There aren’t many important new features. There’s a new QWERTY keyboard included on the watch, so no need to download a third-party one anymore. There’s also a Mindfulness app that encourages you to relax for a few minutes a day. All-in, there’s not much here, and the new features don’t add up to anything substantially different, which is a shame.

*Note that while there is Spotify integration, it’s an awful experience. I’ve been trying to sync a Spotify playlist to my Apple Watch for a fortnight without any success. It’s a pain because it means I have to take my phone with me for a run – which sort of defeats the point of the Apple Watch. I had the same issue on previous Apple Watches.

It underscores the need for serious competition in the smartwatch space, as there’s no real reason for Apple to find a fix for this problem anytime soon…users have no alternative.

Fast charging is Apple’s biggest weapon to help its battery keep up with more demanding days. A 30 min charge will give you 50 per cent battery.

Apple includes the new fast charger in the box, but as per the iPhone, there is no charging brick.

The Apple Watch Series 7 follows a familiar narrative for Apple products: the best in class just got better. A bigger screen, faster charging and proper dust resistance, are the main upgrades the Series 7 delivers.

This won’t be enough to convince a lot of people to upgrade an older Apple Watch, but for new customers (or older ones with a busted device), the Apple Watch Series 7 delivers the best smartwatch experience the market has to offer – with ease.