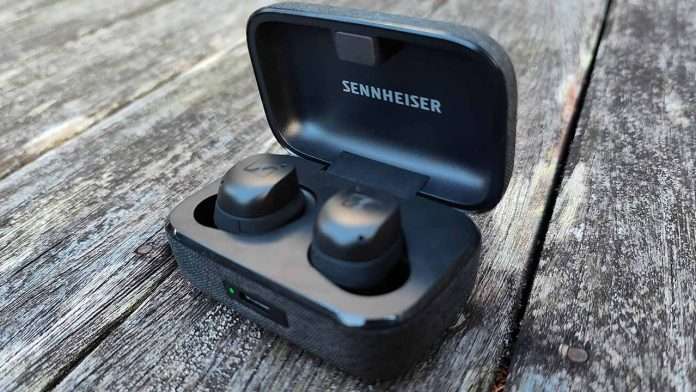 Sennheiser’s Momentum True Wireless 3 earbuds are yet another entry into the premium earbud market.

There’s a lot to like here. They’re comfortable, provide high-quality audio, have decent active noise cancellation, good battery life and customisable touch controls. These are all features that are to be expected in a $425 pair of premium earbuds, though.

Sennheiser’s latest earbuds certainly compete with the big boys in the Sony WF-1000XM4 and the Bose QuietComfort, but they don’t bring anything new to the table. There are slight differences between the market leaders, but they’re minor, and only the shrewdest audiophiles might be able to tell the difference in audio quality.

They are more expensive than the NuraTrue earbuds, which are just as good and significantly cheaper at just $300.

The Momentum True Wireless 3’s are comfortable and classy.

They’re canal earbuds (meaning they push right into your ear) with a rectangular design that provides a large surface for touch controls.

They come in three different sizes to fit almost any ear and come with three different sized “rings.” These rubber rings have a slightly raised ridge to help keep the earbuds in your ears. I liked this feature. It isn’t as drastic as the wings often found on sports-oriented earbuds like the Bose Sport. It’s more subtle and does help. I didn’t have a problem wearing these while running.

The earbuds come in three colours, Graphite (Black), Grey and White. We were given the Graphite version, and they look fine.

The Momentum True Wireless 3’s have an IPX4 resistance rating, meaning they’ll survive a splash of water or some sweat. It’s important to know that this classification doesn’t cover the case, though, so you’ll have to dry the earbuds before charging them.

The case is one of the nicest cases I’ve come across. It’s light, very sturdy and has a cloth material that feels and looks premium. Although functionally, it doesn’t do anything different to any other case, it looks nicer.

The Momentum True Wireless 3 earbuds offer good active noise cancellation (ANC). It isn’t quite as good as the best in the business, the Bose QuietComfort, but it works well. The ANC here is at its best when cancelling low to mid frequencies. It’s great if you’re trying to drown out the low hum of traffic or an aeroplane engine. I did notice it struggled with higher frequencies, though.

I like to test ANC playing the drums. The earbuds did a good job at cancelling the kick and toms. However, they struggled with the sharp crack of the snare and higher frequencies like the crash and hi-hat. This is an extreme test, though. You probably won’t notice the difference in day-to-day usage.

There’s a good amount of customisation available with the touch controls. I especially liked being able to turn the volume up and down via touch (something that isn’t always available with earbuds.) Everything you’d expect is here. You can change track, turn ANC on/off, turn transparency mode on/off, play/pause and initiate a voice assistant. These touch controls and their inputs can be easily changed to your personal preference in the Smart Control app.

A helpful feature that I think all earbuds should have is audible beeps that sound when the earbud registers a touch control. This is accurate and clear with the Momentum True Wireless 3 earbuds. I knew exactly how many times I’d pressed an action, so triple tapping to turn noise cancellation off or on wasn’t an issue. I rarely made any mistakes with the touch controls.

Other than the touch control customisation, the Smart Control app is a little lacking. The equaliser is a long way off the one found on the Sony Connect app. It only offers three customisable frequencies, one for bass, mid and treble. The Sony app offers five for more accurate equalisation.

The app’s best feature is “Sound Zones.” This allows you to set up to 20 zones, automatically changing the sound depending on where you’re located. I didn’t have much use for this, but I can imagine it being helpful if you go to the gym or use public transport and don’t want to equalise the sound each time you change area.

The ear-detection sensors, which pause the music if an earbud falls out and continue playing once you put it back in, worked very well. You can also set up the earbuds to use them solo, i.e. only have one in at a time.

The earbuds come with a 6-mic array. It’s great for transparency mode, in which outside noise gets picked up and played into the earbuds, but it’s even more helpful for calls. My partner could hear me clearly over the phone. They do pick up a bit of wind if standing outside, but it was a good experience most of the time.

The soundstage produced by these earbuds is excellent. It’s wide and clear, providing a good deal of bass without distorting the mix or becoming overbearing.

These earbuds aren’t specialised for one genre; they work well with everything. I couldn’t find a genre that didn’t sound good.

I easily picked out individual elements of a complex track with a lot going on, like The Mouth of Sauron by Howard Shore. The low strings bellowed at the bottom of the mix, while the mids and highs could easily be heard above them.

What makes a pair of earbuds a premium pair of earbuds though, is the bass capabilities. The Momentum True Wireless 3’s didn’t disappoint. Initially, the bass felt lacklustre, but this was due to the default EQ setting. Although the equaliser is limited, changing the bass frequency made a significant difference, and I was able to get the sound exactly how I wanted it.

Rock tracks like Party Hard by Andrew W.K sounded good. The kick drum thumped in the background while the guitar solos and lyrics were clear and consistent. More bass-heavy tracks with long drawn out sub notes, like the hip hop song Oh No by Yelawolf, had a good bounce without the mix being distorted.

It doesn’t quite reach the high standards set by the Sony WF-1000XM4 earbuds with their 8-hours internal battery life and 24 hours total, but it’s better than the Bose QuietComfort and the Apple Airpods Pro, which last 5-hours internally.

A premium set of earbuds needs to tick a few boxes. They need to have good ANC and bass capabilities, a comfortable design, easy-to-use touch controls, good audio quality, and decent battery life.

Sennheiser’s Momentum True Wireless 3 earbuds tick all of these boxes. But the most pressing question is, why would someone buy these earbuds over other premium earbuds? And that’s a tricky question to answer.

The Momentum True Wireless 3’s don’t bring anything new.. They’re very capable earbuds that you’ll love, but so are the Sony WF-1000XM4’s, which are cheaper, have slightly better battery life and have better ANC.

In a market as saturated as the premium earbud market, you need to make a drastic difference or bring something unique to the table to stand out. Sennheiser hasn’t done this with the Momentum True Wireless 3 earbuds. While they’re on par with other earbuds at comparable prices, being on par doesn’t foster excitement or interest. They’re just another pair of premium earbuds in a long list of premium earbuds.

Looking to buy a new pair of in-ear headphones? Check out our Best Wireless Earbuds 2022 list for a roundup of the best products available to buy in New Zealand right now.