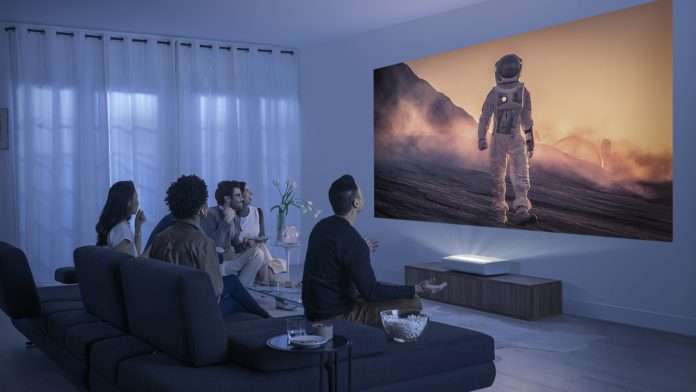 The Samsung Premiere LSP9T projector is flipping expensive. At $13,000 this projector is rivalled only by the best TVs on the market.

It’s simple to use, produces a great 4K 130-inch picture and allows users to create an authentic in-house cinema experience.

The question is, is it better than a TV at a similar price?

Samsung is pushing the LSP9T as a replacement for a TV however, it’s much harder to set up, it’s difficult to watch in a bright room and it only works at its best when using a projector screen.

If you have a wall big enough, and you can afford it, and are in the market for a projector: the Premiere LSP9T is incredible. Just don’t go swapping your TV for one.

The Samsung Premiere LSP9T projector is an expensive device costing $13,000.

The LSP9T has a great design. Its white colour scheme with light grey mesh speaker on the front looks sleek and classy. The projector won’t look out of place in any living room. It can be easily tucked away or placed on top of a table or cabinet without looking out of place.

This is an “ultra-short-throw” projector that sits right up against the wall. It can produce a massive projection when placed only a short distance from the wall, and it works well.

Placing the projector just 113mm away from the wall will provide a 100-inch display, 196mm will produce a 120-inch display, and 238mm will give you the maximum 130-inch display. It’s impressive and provides an immersive experience.

Samsung is pushing the LSP9T as an alternative to a TV. You can see this just by looking at the number of ports it comes with. There are 3x standard HDMI ports, with one of them supporting eARC for audio connections, there’s an RF input for digital TV tuning, there’s a USB-A port and an ethernet port. It’s more than enough however it would’ve been nice to see HDMI 2.1 ports included.

All of the ports are located on the projectors back (wall facing) side. This effectively hides the tangle of cables. However, it does pose some issues. Thick cables are hard to squeeze in when close to the wall, and plugging a long USB device like an Amazon Firestick forced me to bring the projector further away from the wall. I had to realign my display because of it.

The projector also supports Bluetooth and other features like connecting Samsung Galaxy phones to the projector simply by tapping your mobile device on top of the unit. It works well.

Obviously, if you’re purchasing a projector, you’ve probably made a well thought out plan on how it’s going to fit in your house. However, seeing as Samsung is pushing the LSP9T as a TV replacement, setup is a far more complex process.

While Samsung has done well in making the projector easy to use, setting up the LSP9T isn’t as easy as setting up a TV. You need to consider much more.

The LSP9T is an ultra-short-throw projector, so it sits very close to the wall it’s projecting onto. This can pose a problem if the power outlet you’re connecting to is on that same wall, as the cable will be in the way.

Also, I thought a plain, white wall in my home would be sufficient to present the display. I soon found out that minor marks and paint scratches on the wall are easily noticeable when watching shows. To get the best experience out of the LSP9T, you’ll need a projector screen which will add to its already very high cost.

Other than the pre-planning, the LSP9T is effortless to set up. Turning it on will take you to its Tizen interface, and here you can download streaming apps directly to the device.

To adjust the display, you need to adjust the unit itself. Pulling it further away from the wall will make the display bigger, and tilting the device up will reduce the display height. It’s simple and works well. Just make sure you have a big enough wall to start with.

The Premiere LSP9T projector uses the same Tizen operating system that can be found on most new Samsung TVs. It’s simple and works well, most of the time.

I did find the interface was often slow, and it felt clunky. This was most obvious at startup. There were significant delays in my inputs, and it took a while for the LSP9T to become fully responsive. But once the projector had “warmed up,” it was fine.

You can download and install popular streaming services, like Netflix, Disney+, and Amazon Prime, directly to the projector. You can also download local streaming services like Spark Sport, TVNZ and Neon from the app store. And I did appreciate having an ethernet port on the back of the projector as it allowed for a faster connection when streaming 4K content.

Samsung’s Premiere LSP9T projector can generate a fantastic display, and that’s due to its triple laser technology. However, while it’s easily the best picture I’ve seen a projector produce, it still doesn’t match the quality of a TV at a similar price.

When comparing the LSP9T to other projectors, it’s one of the best there is. The triple laser technology means separate red, blue and green lasers create a vibrant, crisp and bright (when in a dark room) picture. Most projectors pass lasers through a colour wheel to get the full range of colours. The LSP9T doesn’t, and the results are impressive.

For a projector, the Premiere LSP9T has a wide colour gamut. Other projectors usually use filters to produce a range of colours, leading to a dimmer picture. The triple laser system means the LSP9T doesn’t need a filter and the vibrancy of the colours it produces is excellent. Watching 4K nature shows with this projector look brilliant.

This is also one of the first projectors to support HDR10+. This uses dynamic metadata and adjusts the brightness on a scene-by-scene, frame-by-frame basis. When compared to standard HDR10, which uses static data meaning there’s only one set of values established for a whole piece of content, HDR10+ produces a much more realistic image as each frame is given its own colours, brightness and contrast parameters. It works well.

The area where it’s most obvious the LSP9T isn’t as good as top-of-the-range TVs is the blacks. Projectors work by projecting light, obviously, and this means they’ll never be as inky as an LED screen. Often I found the blacks looked more grey than dark. The projector wasn’t able to provide a deep colour like TVs at a similar price range.

I also found it hard to use the projector in a bright room. Although Samsung claims the projector produces 2800 lumens of brightness, which is massive, I still found the display hard to see. Something I’ve never come across with a TV.

Gaming also isn’t as good with the LSP9T as a TV costing $13,000. The projector only supports a 60Hz refresh rate, meaning you won’t be able to play games in 4K/120fps with your gaming console.

I was impressed by the audio the projector can produce.

There’s a speaker on the front which is very good at delivering sound over a long distance. I could hear the audio clearly when I was sitting a long way from the projector. It’s great.

The audio has width and depth, but it does struggle with bass. It’s not distracting in any way, but if you want the true cinema experience, you still can’t beat a decent surround sound system.

With that said, I didn’t feel I needed to use my soundbar with the projector, the in-built speaker was easily capable enough.

After a long absence, Samsung has brought the projector back and it’s now better than ever.

The triple laser technology inside the Premiere LSP9T generates a vibrant and crisp 4K picture, it has a wide colour gamut and the in-built speakers are impressive.

If you’re looking for a cinema experience at home you won’t be disappointed by the Premiere LSP9T.

This is one of the best projectors on the market however, it still isn’t quite as good as similarly priced or even cheaper TVs out there. And projectors still aren’t great in the daylight.