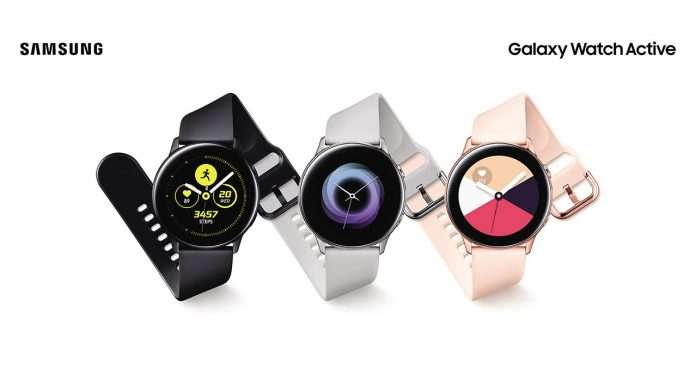 The Galaxy Watch Active first came out in March 2019, so it’s one of the older smartwatches on the market now. Meaning it lacks some of the more technologically advanced features that newer smartwatches have; however, this is an affordable smartwatch that delivers on what it promises. It’s sleek, sporty, and comes packed with most of the same apps and features you get in a watch twice as expensive.

There are limitations, though. The storage capacity isn’t great, there isn’t an LTE version, and it doesn’t have the thin bezels that later Samsung Watches have. But, as I said before, it is cheaper, and that is undeniably appealing.

You can purchase this watch for between $250 – $300 (NZD). That’s pretty affordable when compared to the newer Galaxy Watch Active 2, which is around NZ$500 and Galaxy Watch 3 which can range from NZ$750.

The Galaxy Watch Active’s design makes it more appealing for anyone looking for a  sport-oriented smartwatch. The watch has a circular face and only two buttons on the side – it’s a sleek and light smartwatch that sits nicely on the wrist.

The Active does not have the Galaxy Watch 3’s physical bezel or the digital bezel that the Active 2 has. To navigate the apps, you will have to use the 1.1-inch 360×360 touchscreen. This is a smaller screen than other smartwatches. And navigating the apps can sometimes be difficult; however, the display is very responsive, and you can solve most issues by customising your on-screen widgets. These widgets allow you to access apps by swiping left on the screen. It’s a handy solution for those who find the app navigation complicated.

The two buttons on the side don’t have many functions, but what’s great is that they are easy to access. When running or working out, touching a specific part of a smartwatch screen can be difficult. The buttons on the side make that easy. Pressing the top button to start a run timer and pressing it again to pause is simple when sweating or being active, for example.

The 20mm interchangeable silicone bands that attach to the Active add to its sporty aesthetic. They are stylish, comfortable and sweat-resistant. The watch feels secure when it is on which is vital as the Active only weighs 25g. The watch isn’t irritating; it’s comfortable, light and small enough not to be a burden when being active. The straps don’t have to be specific to the Active either. You can use straps from the Active 2 and the Galaxy watches, they will all be compatible with each watch. This is great for personal customisation and replacements will cost around $60 (NZD).

The Active is water-resistant to a depth of 5m, complemented by several swimming-based workouts provided by Samsung Health.

The Galaxy Watch active is very responsive. Navigating the watch is fast and straightforward thanks to the Exynos 9110 dual-core processor inside the watch.

However. when using third-party apps to change the face of the Active, I did find there was a slowdown in the screen. Often, I would have to look at my watch for around 10 seconds before it changed to the correct time, which can be annoying when only quickly glancing at your watch. I suspect this slowdown is due to poorly-designed third-party apps, because the error didn’t happen with any of Samsung’s approved-companion apps.

The Active has 4GB of internal memory for storing files. The operating system takes up 1.5GB, which does not leave much for personal files. This can be an issue if you plan to have your entire music collection on your smartwatch. If you were looking to play a couple of playlists, I found this to be plenty of space. Changing the stored playlists was easy too.

The Active incorporates Spotify to listen to music, and it works flawlessly. Connecting your watch to your phone to control the music or having your watch as your standalone player is simple to do, and changing between these features is intuitive.

Pairing your watch with some wireless Bluetooth headphones is also a doddle, and it gives you the option to leave your phone at home or in the car when listening to music on a workout.

The Galaxy Watch Active uses Tizen software (not Wear OS) which is the basis for the watches’ easy-to-use approach. Both the Tizen and Wear OS operating systems are very good systems, but they do have their differences. Wear OS is Google’s operating system whereas Tizen is made by Samsung. Wear OS comes with more apps such as Google Maps, and Google Calendar. It also has Google Assistant. Tizen has fewer apps but is much better for fitness-based activities with Samsung Health. Ultimately if you are already a Google app user, the Galaxy Watch Active may not be the way to go with its Tizen OS.

The watch has two main inputs, swipe right to see your notifications and swipe left to access your widgets. All of the apps I used could be turned into widgets, meaning my most commonly used apps were only one or two slides to the left. It’s simple and effective.

There isn’t an LTE version of the Active, meaning that you need to be connected to your phone to receive notifications.

The watch also lets you reply to Messenger or Whatsapp messages; however, this is quite cumbersome and isn’t worth the hassle in my opinion.

The Active comes with a large number of health apps with Samsung Health. These can record your steps, your sleep, workouts and a lot more. And the watch does provide you with guides for exercising. It also comes with an activity tracker and will alert you if you haven’t been moving or active for a while which is perfect for anyone with an office job as it gently reminds you to keep moving throughout the day.

The Active has a 230mAh battery that Samsung says can last up to 45 hours on a single charge. I found that this was only true if battery-intensive features were turned off such as Wi-Fi connection, GPS tracking and always-on display. When the watch is used typically, I found the battery would last about 1.5 days on a single charge. Which is still pretty good and even rivals the Apple Watch Series 6.

The Active comes with a USB charging dock, and it has the Powershare feature that allows it to charge on the back of other Samsung compatible phones, which is handy.

Overall the Samsung Galaxy Watch Active is a good-looking smartwatch with an excellent price tag. It has all the features most of us need, and costs less than half the price of a new model. There are some modern features missing such as answering calls and monitoring cameras, but there is enough to make it well worth the low price.