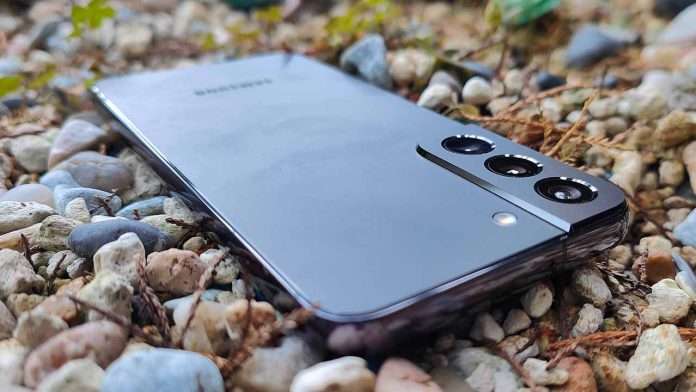 At $1,299 the S22 is significantly cheaper than the $2,000 flagship, the S22 Ultra, yet it comes with a lot of premium features that allow it to punch above its weight.

The 120Hz screen is one of the best displays for a phone in this price range. It’s cheaper than its main rival, the iPhone 13, and it has the same Snapdragon 8 Gen 1 chipset as the S22 Ultra.

It isn’t without issues, though. The biggest problem with the S22 is the battery. It’s poor. A display this good needs a battery to match so it can be used at its best, all day long. Unfortunately, that isn’t the case here.

A powerful chipset and a bright, vibrant display is all good and well when you can use it at its best, however the 3,700mAh battery rarely allows that. With moderate usage it barely gets through a day and it’s a frustrating oversight by Samsung.

If you’re looking for a comparison between Android phones, Google’s Pixel 6 costs the same as the S22 for its 128GB/256GB | 8GB models.

If you’re upgrading from the Galaxy S21, you’ll notice very little difference with the S22’s design. The polycarbonate material found on the back of the S21 has been replaced with Gorilla Glass Victus Plus, and the camera bump on the S22 is now the same colour as the rest of the phone, that’s about it. Both of these are good improvements, the S22 feels and looks better than its predecessor, but these changes aren’t much to write home about.

I liked how small the S22 was. The 6.1-inch device is light and easy to navigate with one hand. This compact form is something I didn’t think I’d miss in a phone, but I appreciated not having to use two hands all the time. If you’re looking for a smaller device this is a good option.

Samsung has maintained the vertically aligned camera array with the S22. It’s the same as the S21 and it’s fine. The array is raised slightly but it’s unobtrusive and didn’t get caught on my trousers when putting it into my pocket. Although smaller than top-of-the-range devices, I didn’t have any issues with the S22 falling out of my pocket either.

The S22 comes in numerous colours, Phantom Black, Phantom White, Green and Pink Gold All of these look sleek with Green being a standout.

Colours are detailed, vivid and Samsung’s Vision Booster software accurately adjusts brightness and colour contrast based on what you’re watching and the environment you’re in.

It has a peak brightness of 1,300 nits meaning it can easily be used in direct sunlight. That’s significant, especially when taking into account the iPhone 13 and the Pixel 6 both have a maximum brightness of 800 nits.

It’s a smooth display with an adaptive refresh rate that can range from 48Hz to 120Hz depending on what you’re doing with the phone. This is much better than the iPhone 13’s 60Hz display and there’s even a noticeable difference in smoothness between the S22 and the 90Hz Pixel 6.

The display does have its drawbacks though. 120Hz displays are battery eaters, even with adaptive refresh rates turned on. And bafflingly the S22 has a disappointing 3,700mAh battery, a smaller power-cell than the already average 4,000mAh battery found in the S21. If you use the device at 120Hz most of the time, you’ll need to charge at least twice a day. (More on this below)

The S22 is powered by the Snapdragon 8 Gen 1 chipset. This is the same chipset found in the S22 Ultra and the S22+ and it flies.

The S22 can handle anything you throw at it, whether it’s graphically-intensive games like Genshin Impact or if you’re editing RAW photos, it can do so without hiccups.

When compared to the flagship S22 Ultra, the camera array is where the S22 differs most. That’s not to say it’s a bad array, it allows you to take great social media worthy photos and it competes with other phones in the same price category. However if you’re looking for the best of the best camera hardware, you’ll be better off with the S22 Ultra.

The S22 boasts a 50MP wide camera lens, a 10MP telephoto lens with 3x optical zoom and a 12MP ultra-wide lens. The biggest upgrade here from the previous S21 is the wide lens. It’s been upgraded from 12MP to 50MP and has a 23% larger lens so it can take in more light. This theoretically makes it better for low light and night photography. You can see the results in our tests below.

We tested the camera array alongside the iPhone 13 to give you an idea of which phone has the better camera array.

These images were taken at 1x zoom. You can see the S22 generates a more vibrant image than the iPhone 13. The white’s and reds of the ECTO-1 look thicker. The iPhone 13 image looks a little more dull however, this is a more realistic portrayal of the image. Although it may be hard for viewers to notice if you look at the board the ECTO-1is sitting on, the S22 makes it look more orange than it actually is.

There is very little to differentiate the images taken by the S22 and the iPhone 13 at 3x zoom. The S22 image is a little more saturated, that’s it.

These images are poorly aligned however if you look at the yellow canisters on the top of the ECTO-1, you can see the edges on the image produced by the S22 are sharper at 10x zoom when compared to the iPhone 13.

It’s a similar story when it comes to low-light photography, there isn’t much to differentiate the two images. Again we see the S22 saturates the image more than the iPhone 13 providing a more vibrant picture, however the iPhone 13 delivers a more realistic image.

I’m a bit confused about this decision by Samsung. While the Snapdragon 8 Gen 1 chipset is more efficient than previous chipsets, it’s not efficient enough to warrant a smaller battery.

It takes away from the capabilities of the phone. The S22 has a great display however I rarely used it at its best because it drained the battery too quickly. With moderate usage the S22 will last just about a day however if you’re planning on performing intensive tasks like gaming, be prepared to charge the phone multiple times. 30 minutes of playing Genshin Impact dropped the battery from 90% to 60% in our tests.

Much like Apple, Samsung also needs to up its charging game. The S22 doesn’t come with a charger in the box and the device only supports 25W wired and 15W wireless charging. It’s disappointing as the S22 + and S22 Ultra support 45W wired charging.

While this is better than the iPhone 13’s 20W wired charging, it’s a long way off the 80W and 50W wired and wireless charging capabilities of the latest Oppo device, the Find X5 Pro.

The Samsung Galaxy S22 is a very good smartphone. For its $1,399 price you’re getting a lot.

The 120Hz display is vibrant and sharp, the Snapdragon 8 Gen 1 chipset can handle anything you throw at it and the design is nice and compact for easy one-handed use.

While the camera array isn’t as good as “pro-level” devices, it’s still a strong array with an effective 3x optical zoom and an improved 50MP main lens.

The problem here is the battery. Even with an adaptive refresh rate and a more efficient chipset a 3,700mAh just isn’t big enough for a device released in 2022. This display deserves a better battery so it can be used at its best without worrying about where you’re going to charge it next.

If you don’t use your phone for intensive tasks like gaming or video editing, you’ll just about be able to get through a day with the S22, if you do perform intensive tasks, prepare to charge it a lot.