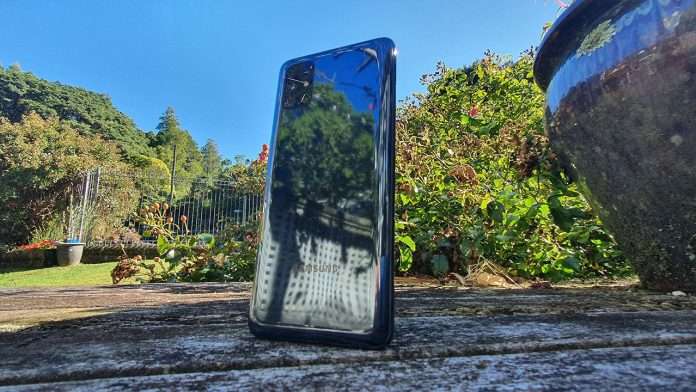 The Samsung Galaxy M51 will appeal to those who some of the features that a high-end smartphone brings, but struggle to convince themselves to spend over NZ$1,000 on a flagship device.

While it doesn’t look the most flash and doesn’t have the best features on the market, the M51 has everything you need in a smartphone and it works well.

This is an affordable phone with decent cameras, fast performance, and one of the best batteries on the market. You’ll be able to use the M51 all day without ever having to worry about battery life and it’s a very attractive mid-range smartphone option.

If you’re looking for a flash new smartphone then the M51 isn’t going to be for you. There isn’t anything noteworthy about the design of the M51. It looks like a standard smartphone, and in today’s market, that’s pretty boring.

It’s a large smartphone measuring 163.9 x 76.3 x 9.5 mm which is only slightly smaller than the massive Samsung Galaxy S21 Ultra measuring 165.1 x 75.6 x 8.9 mm. It’s also quite heavy at 213g (due to its huge 7000mAh battery), but this is the way smartphones are going. It seems that companies like Samsung and Apple are happy making their new devices bigger, however, with that said, it’s difficult to use the M51 with only one hand.

I do like that the quad-camera setup is nicely tucked into the left-hand corner of the device, and it doesn’t protrude out. It looks clean and didn’t cause any issues when putting it in my pocket.

With the M51, Samsung decided to put the fingerprint sensor on the side of the phone, which took some getting used to. I often picked up my phone and accidentally unlocked it. This quickly got annoying and was the cause of more than a few unintentional calls and texts.

It comes in two colours, black and white. These are standard and boring. There isn’t a colour gradient scheme, and unfortunately, the M51 doesn’t have more vibrant colour options. The design of the M51 lacks a classy, standout look. It needs more “oomph” because it’s a dull looking smartphone.

Great display for a mid-range phone

The M51 has a very good display, but its low refresh rate is clearly where money is being saved.

It has a 6.7 inch AMOLED screen, with a 1080×2400 resolution and a 393 PPI density. For a mid-range smartphone, this is a very good screen, images are sharp, and the colours are vivid. Its refresh rate is the only spec that’s mid-range capped at 60hz.

This is a fair compromise, I think, 90Hz or 120Hz refresh rates are a very recent thing what we only see in high-end smartphones.

If you can get over the 60hz refresh rate of the M51, the screen is still very good for a mid-range smartphone. It’s capable of producing decent images when streaming, gaming or watching movies. And when I was doing that, I had no issues with the display.

The M51 performs well. I had no issues with lag or overheating when gaming, surfing the web, watching Netflix or going through my emails.

The Snapdragon 730G octa-core chipset powers the M51 at 2.2 GHz with 8GB of RAM. It’s more than capable of handling heavy workloads, and I didn’t notice any drops in performance when using the phone. Playing Call of Duty Mobile performed smoothly, and it was just as good of an experience as I had when playing on a flagship device like the Samsung Galaxy S21.

You get 128GB of internal storage with the M51, and if that’s not enough, there is a microSD slot for extra storage, which is always a nice option to have.

The M51 has a quad-core camera setup. It features a 64MP main lens, a 12MP ultra-wide sensor, a 5MP depth sensor and a 5MP macro sensor. The front of the phone has a 32MP selfie camera.

The M51’s camera setup performs pretty well. The primary camera can produce good images that look sharp and have a large amount of detail and a high dynamic range. The main camera is prone to slightly oversaturating the images, but I was impressed by its overall performance.

The 12MP wide-angle lens has a 123-degree field of view which allows for a lot more to be in the image. Similarly to the main camera, it produced sharp images with vibrant colours. However, it does struggle to focus when zooming in. As soon as I started zooming, the image lost detail.

I enjoyed the 5MP macro sensor lens. It allowed for crisp close up shots, ideal for when I was taking photos of products. It generated lovely sharp images however, it’s a struggle to focus with this lens as it’s a fixed focus lens. I found I had to be very close to my subject for the image to be in focus when using the macro sensor.

The camera comes with many modes and features that we’ve come to expect from a Samsung phone. I especially enjoyed the Single take feature, which takes photos and videos with all of the lenses allowing you to pick the one you think is best. Sometimes it’s hard to decide which camera mode will generate the best image for the photo you’re taking. The Single take feature eliminates this problem, and it was nice to access premium features like this with the mid-range M51.

The battery inside the M51 is a beast. The M51 boasts a massive 7000mAh battery.

The battery was able to last two full days with heavy usage on a single charge. It’s impressive and ideal for someone who loves gaming on their phone or doesn’t have somewhere to charge their phone everywhere they go.

I also love that you can charge other devices with a USB-C to USB-C cable. While this isn’t a new feature with smartphones, it works best with the M51. It enabled me to charge other less battery-efficient devices, like my earbuds, while still having plenty of battery on my phone. It’s great.

The Samsung Galaxy M51 isn’t trying to compete with the best of the best smartphones. It knows it’s a mid-range phone, and that’s what makes it so good.

The M51 doesn’t have the best cameras, display or performance on the market, but it has everything you would need in a smartphone. And it does everything pretty well. I was impressed by how good the cameras were, the performance is steady and great for gaming, and the massive battery means you can use all of these features for long periods without having to worry about it running out of charge.

It’s a boring looking phone, and a low 60hz refresh rate holds back the screen, but this is a great mid-range smartphone option.

It’s significantly cheaper than flagship devices and is well worth the money. You’ll love using this phone all day without worrying about where your next charging point will be.