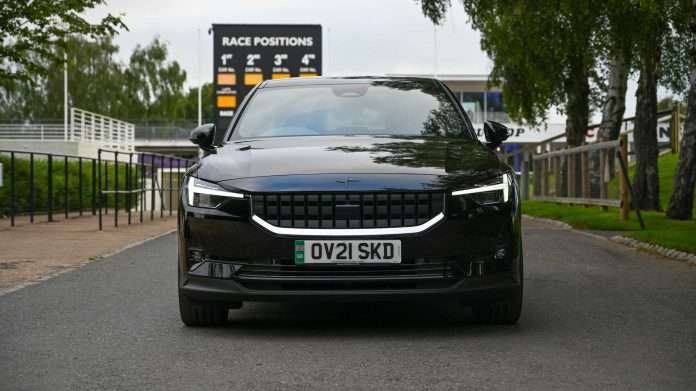 The Polestar name might not ring a bell, but its beginnings certainly will. Created in 2017 and designed to be a trendier, more athletic cousin of Volvo, Polestar specializes in clean design, cutting-edge tech and electric performance. First came the very Volvo-looking Polestar 1, a powerful and exclusive hybrid. Now comes the Polestar 2; an all-electric five-door fastback with the Tesla Model 3 firmly in its sights.

As you can probably tell from the name, the Polestar 2 is the second model from the fledging brand – but the first to be all-electric. At 4.6 metres long, the Polestar 2 straddles two sectors that are growing all the time; it sits in the popular crossover sector and electrifies things for even more appeal.

Although based on a past Volvo concept car, the 2 marks a step away from its Swedish roots both inside and out. Svelte, with clean lines inside out, it’s a statement of intent from Polestar’s design bods; its blocky grille, interesting stature and rear light signature look unlike anything else on the road.

Inside, the Polestar 2 is similarly utilitarian, and although keener-eyed views will notice bits and pieces of Volvo trim, this is a fresh-looking cabin. Key to the user experience is a central touchscreen, loaded not with Polestar’s own software, but an Android-powered OS. This isn’t a self-contained island of software like Android Auto, the car’s entire system runs on Google.

Benefits to using the search giant’s software include Google Maps, Spotify as well as Google Assistant integration – and Android Auto also works seamlessly. Like Tesla’s, Google’s OS is also open to OTA updates, so expect functionality and reliability to improve over time.

There’s nothing overly complex here, as the idea is to be simple and easy to use. Look around the cabin, for example, and you’ll find almost no buttons. Aside from adaptive cruise control, and some infotainment functions, everything is controlled via the touchscreen.

The Polestar 2 is available with either one or two electric motors, and we drove the faster dual-motor model with the added Performance Pack. Thanks to a combined 407PS, 0-100km/h takes just 4.7 seconds – not bad for a 2123kg SUV – and top speed is a solid 205km/h. Managing the power is easy thanks to a nice progressive throttle, but if you want to destroy everything off the lights, the Polestar 2 will oblige too.

The Performance Pack doesn’t make anything quicker, but it does promise to improve the handling; in addition to larger 20-inch alloys, it’ll give you vented, four-pot Caliper Brembo brakes, beefed up anti-roll bars and manually adjustable Öhlins dampers. We’ll get to those later.

But back to the driving. Despite being an SUV, and clocking in at more than two tonnes, the Polestar 2 has more than enough poise and dynamics to satisfy most drivers. The improved Brembo brakes are able to put up with the weight admirably, and the steering wheel can be set to offer a reassuring amount of feedback.

The damper settings are transformative; there are 22 clicks in total from hard to soft, with one being super stiff and 22 being mattress soft. We tried them all out and found around one and two best for hard, track driving and something around 12 best for road use. However, the softer settings didn’t give up much performance and did offer a less busy, more comfortable ride.

Range is a competitive 479km thanks to a 78kWh lithium-ion battery, and charging can be as quick as 40 minutes with a public charger, or seven hours overnight with a home charging solution.

There are other models available; the range kicks off with a front-wheel drive single motor model with 224PS and a range of 439km and it’s followed up with a longer-range version with 231PS and a range of 539km – actually greater than that of the top end model. Both do 0-100km/h in 7.4 seconds with a top speed of 160km/h. The entry-level Polestar 2 uses a 64kWh battery – the other two use a 78kWh unit.

Polestar is still less than five years old, but earlier this year its CEO Thomas Ingenlath indicated that it’d soon be coming to New Zealand – possibly this year. Local prices should appear when the brand finally sets up shop, but don’t head to your Volvo dealer in the meantime – Polestar is independent from Volvo and will have its own dealerships and after service care.

Most EVs and crossovers opt for style, performance or practicality but the Polestar 2 shoots for all three and largely pulls it off. Featuring a clean, unique design and serious performance, it still manages to turn round a decent range. Throw in its race-derived dampers which are at home on both tracks and motorways, and the Polestar 2 is an intriguing rival to the Tesla Model 3.

Facebook
Twitter
WhatsApp
Linkedin
Previous articleNintendo has a mysterious new controller in the works, according to an FCC filing
Next articleMeet Pavan Vyas – the man behind the NZ Covid Tracer app

Alan Martin - 25/05/2022
Without wanting to worry people, we’re not on target for the future depicted in The Jetsons. Yes, we have smartwatches, tablet computers and video...