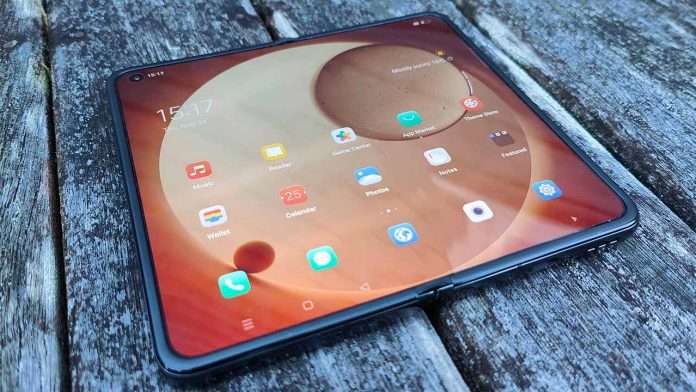 Oppo’s Find N is a foldable device that competes with the best foldables out there. Which, in New Zealand, really only means the Samsung Galaxy Z Fold3.

In some ways the Find N is clearly better than the Z Fold3. It has a better camera array and a better battery, however the outer screen isn’t quite as good and it isn’t compatible with as many apps.

It’s a shame because it’s a competitive foldable that would bring some competition to the market.

The Oppo Find N is not currently available in New Zealand. However, based on other phones Oppo has released (Find X5 Pro) we can assume it will be similarly priced to its main competitor the Samsung Galaxy Z Fold3.

As far as foldable phones go, there isn’t much here that you wouldn’t expect.

The overall design is solid and sturdy. This is a short device, at 13.26cm it’s a good three centimetres shorter than my 16.37cm long Find X5 Pro. I didn’t mind this. For any apps or programs where I felt I needed more space, I used the larger unfolded display. And I enjoyed how easily it fit in my pocket.

As is the case with all foldables, when folded, the Find N is chunky. It’s essentially two phones lying on top of each other. This is something that can’t be helped, if you don’t like it, you probably shouldn’t be looking at foldable devices. Another feature that can’t be helped is the crease. There’s always going to be a crease in a foldable phone, but I was impressed at how well Oppo managed to hide it.

When fully unfolded I had to look for it in order to notice it. In “Flexform” mode where you fold the phone in half, laptop-esque, it’s more noticeable as the crease looks brighter than the rest of the screen. I didn’t have much use for this mode though so it wasn’t a bother.

The Find N’s Fold is very strong, so much so that I struggled to unfold it with one-hand, in fact I couldn’t. It’s impressive. The fold will hold its position no matter how you leave it. If you want to place the phone down, fold it in half and film a selfie video, it won’t budge.

There’s Gorilla Glass Victus on the front and back of the device, it comes in three colours Black, White and Purple but doesn’t have a resistance rating which is a downside. It means it isn’t water resistant, something that we’re seeing more often than not in premium phones these days.

The unfolded 7.1-inch display is the star here. As someone who watches a lot of videos on my phone, it’s great being able to watch them on a bigger scale.

Being a foldable I was expecting the Find N to be heavy but it only weighs 275g. This isn’t bad considering the iPhone 13 Pro Max weighs 240g. It wasn’t tiresome holding it up to watch videos.

The front display felt like I was using a normal phone. It’s vibrant and functioned well but it’s capped at a 60Hz refresh rate. This is less than the Samsung Z Fold 3 which offers a 120Hz front display. It was jarring going from the Find N’s 120Hz larger display to the 60Hz front display. But most of the time I was only using the front display for things where the refresh rate wasn’t too much bother, like messaging or answering calls. Using social media, web surfing or playing games I used the larger 120Hz display.

I found Flexform mode, in which the phone is set up like a laptop, relatively useless. There aren’t many apps that fully support it. Instagram didn’t function well in Flexform mode at all. I ended up avoiding it.

The best use of the larger screen is running apps side by side. This is where you open one program or app on one side of the screen and a different one on the other side of the display. You can then separately scroll through each app without the other one closing. It’s ideal for multitasking and looks great on the vibrant 120Hz display. Unfortunately I couldn’t figure out how to do this within the same app. For example I couldn’t open two web pages on my browser and put them side by side, it had to be two separate apps, which was disappointing.

If you’re looking for a phone that will allow you to take the best pictures possible, the Find N isn’t it. It has a respectable camera array that allows you to take good photos but it’s a way off the best in the business.

Below are some comparisons with the iPhone 13 Pro Max. It’s probably a bit unfair to compare the Find N to Apple’s flagship phone, but it gives a good idea of where the camera array is compared to a premium device. And after our tests, it’s quite impressive.

The Find N also has two 32MP selfie cameras located at the top of the front and main display. These are fine.

As you can see here, the Find N holds its own when taking a 1x photo. The image is more vibrant than the iPhone 13 Pro Max’s image this is something we see often when comparing the Apple flagship with other devices. The 13 Pro Max takes a more realistic image representing the actual colours as opposed to increasing the saturation.

At 10x zoom there’s no clear winner. Both pictures aren’t great. That’s because at 10x zoom, both devices are using digital zoom to generate the image not optical zoom. At 10x zoom software is being used to colour correct and adjust the image to fit the lens by both phones. An optical 10x zoom, as found on Samsung’s S22 Ultra, will produce a much sharper image.

Again in low-light scenarios there isn’t much to differentiate the Find N and the iPhone 13 Pro Max. The iPhone produces a more realistic portrayal of the lighting and colours, but that’s about it.

In these images there’s almost no light, well at least to the human eye. We can see that the iPhone 13 Pro Max is the clear winner here. Although neither photo is great, the iPhone does a better job of lighting up the subject when very little light is available.

Currently, it’s the fastest processor you can get in a foldable phone as it’s the same processor that can be found in Samsung’ Z Fold 3.

The Find N comes in two configurations, there’s an 8GB RAM option and a 12GB RAM option with either 256GB or 512GB of storage.

Our review device had 512GB of storage and 12GB of RAM.

The main attraction here is the charging support. The Find N supports 33W wired SUPERVOOC flash charging which can charge the phone to 50% in just 30 minutes. It also supports 15W wireless AIRVOOC charging and is compatible with standard Qi chargers.

It also comes with a charger in the box which will always be something I’m a fan of.

It has a good battery with the fast charging speeds being a massive bonus, it has a good camera array and it has a strong, sturdy design. The larger display is vibrant and responsive and multitasking mode works well. While I didn’t have any use for Flexform mode, those who like to take selfies will love it.

Is the Find N better than a premium device like the iPhone 13 Pro Max or the Samsung Galaxy S22 Ultra? No. Does it compete with other foldables on the market? Yes. If you’re looking for a foldable phone, basically all you’re looking for is a larger screen, and the Find N doesn’t disappoint. It provides a large 7.1-inch screen that works seamlessly and a processor that lets you use it without hiccups.

The Find N isn’t available in New Zealand and therefore it doesn’t have an official price. However we can assume it will be similar in price to the $2,699 Samsung Galaxy Z Fold3. If you’re looking for a foldable phone and you’re not a fan of Samsung, if and when the Oppo Find N releases in NZ you won’t be disappointed.