theBit.nz
HomeReviewsMicrosoft Surface Pro 8 review: The best 2-in-1 on the market, held...
Reviews 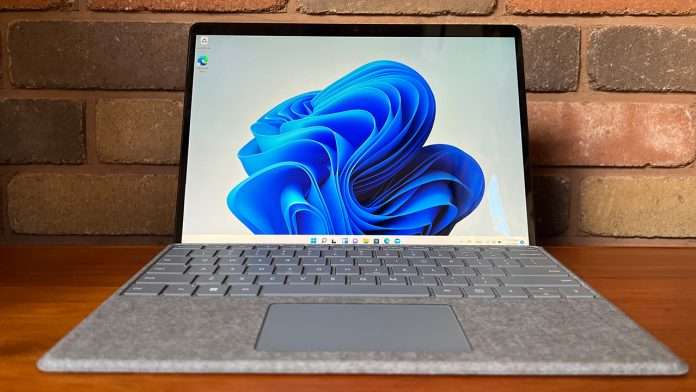 Microsoft’s Surface Pro 8 is a brilliant 2-in-1.

With the release of Windows 11, this is a device that works just as well in tablet mode as it does in laptop mode. Its 120hz display is vibrant and sharp, the touchscreen is responsive and it runs almost anything you throw at it, albeit 4K video editing and graphically demanding gaming.

The Surface Pro 8 is astoundingly expensive, and worse still, it doesn’t come with a keyboard in the box. Which is an expensive addition at $300.

If you can afford it (and the keyboard), you’re going to love it. But if you’re looking for an affordable 2-in-1 to do your work on, there are better options elsewhere.

The Surface Pro 8 comes in a variety of different configurations.

There’s a lot of options here, but the key thing to take away from this is the Surface Pro 8 is expensive. Really expensive.

These prices also don’t take into consideration the must-have Surface Pro Signature Keyboard which costs $300, or $480 with the Surface Slim Pen 2. With the keyboard included, the best version of the Surface Pro 8 is now over $4,000 and that’s ridiculous.

The Surface Pro 8’s design is functional, sturdy and good-looking. It does have some minor inconveniences in regards to its ports but overall, I loved it’s design.

When picking up the Surface Pro 8 I instantly noticed its size and weight. It’s quite heavy at 891g, and it’s big, measuring 287mm x 208mm x 9.3mm. Neither of these dimensions are a burden though. Functional and comfortable to hold, the Surface Pro 8 finds a happy medium between being a big tablet, and a small laptop.

I particularly liked the stand that’s built into the back. It’s quite hard to open up, requiring ample fingernails, but it’s solid and sturdy. It’s easy to have the Pro 8 free standing in both portrait and landscape orientations and repositioning it was a breeze.

The Pro 8 comes in two colours, Platinum and Graphite. Neither of these are particularly showy, they’re simple and sleek which is fine. If you want to add a bit of flair to the device you can get vibrant coloured Surface Pro Signature keyboards that double up as a cover when attached to the device.

The Pro 8 has two USB-C (Thunderbolt 4) ports, a Surface Connect Charger port, a headphone jack and obviously the port to connect the keyboard. While a USB-A port would have been nice, it would’ve resulted in the device being thicker so its absence is excusable. The Thunderbolt 4 USB-C ports are ideal for external monitors however, annoyingly, they’re both located on the same side of the device. It means you’ll have to rearrange your office setup in order to accommodate their location. One on each side would’ve been more user friendly.

importantly, responsive. I was able to easily use the device with just my finger.

The touch sensitivity is accurate. The Pro 8 recognised my touches even on smaller icons like the minimise function and the refresh icon on browsers.

Supporting a 120hz refresh rate, maneuvering the mouse, repositioning windows, and simply navigating the interface is buttery smooth. Unfortunately, at the time of writing, there isn’t an adaptive refresh rate function (that changes the display’s refresh rate based on what you’re doing) in order to save battery, you can only switch between 120hz or 60hz.

The display utilises Adaptive Colour, though. This automatically adjusts the colour temperature of the screen based on your surroundings.

Using the Pro 8 in direct sunlight wasn’t great. The screen is reflective and it was hard to see anything other than my unshaven face with my Covid-19 lockdown hair on top, staring straight back at me. With that said, I’m yet to find a laptop or tablet that does work well in direct sunlight so it was to be expected.

The bezels on the side of the display (landscape) are thin and unobtrusive. The top and bottom bezels are roughly double the width of the side bezels, but unless you really look you won’t notice. The point I’m trying to make here is don’t expect an edge-to-edge display..

I liked that the Pro Signature Keyboard can magnetically fold up to hide the bottom bezel, but I did find it a bit hard to touch the taskbar icons when the keyboard was set up this way.

Thanks to Windows 11, the Surface Pro 8 is much more functional as a tablet.

This isn’t the case here. It’s just as easy to use the Pro 8 tablet mode as it is in laptop mode. Switching between the two is seamless and it feels much more like a 2-in-1 rather than a laptop that kind of functions as a tablet as well.

I was disappointed with the compatibility between Windows devices. I have a Windows 11 PC that I was hoping would communicate with the Surface Pro 8 a bit better than it does. You can cast to other devices, however it’s laggy and slow. I would’ve liked to use the Pro 8 as a second monitor by plugging it into my PC, however that wasn’t an option either. With the seamless compatibility we see with Apple devices, it would’ve been nice if Windows 11 devices had that same level of functionality.

The Surface Slim Pen 2 feels good. I didn’t have much reason to use it, but using it to doodle on Microsoft Whiteboard was responsive and accurate. I wouldn’t go so far to say it felt like I was writing on paper, as Microsoft marketing would have you think, but it’s a significant Improvement. I especially liked being able to use the back of the pen as an eraser and being able to customise the buttons. In the Windows 11 settings you can change what you want the buttons to do to accommodate your usage.

The Surface Pro 8 flies. It’s capable of powering through most of what you throw at it.

While it isn’t the best for gaming, standard usage like surfing the internet, having multiple tabs open, watching movies/videos and using programs like Photoshop work without issues.

Video editing was fine too, however don’t expect to be able to work through 4K footage, as it’s laggy and takes a long time to render. Even if video editing at lower resolutions, I would recommend at least 16GB of RAM otherwise you will come across slowdowns.

The Surface Pro Signature Keyboard is a must-have with the Surface Pro 8. A touch-screen keyboard does pop up when using the device in tablet mode, but it doesn’t compare to the keyboard.

The Pro Signature is lovely to type on. The keys are spaced out nicely, and it’s comfortable. I didn’t feel I needed to round my shoulders as much as I do with other small keyboards.

The touchpad is accurate and large enough so you can navigate to the far corners of the screen efficiently.

I liked the cradle the keyboard has for the Slim Pen 2. This not only charges the pen, but it can also be folded up so the pen is hidden up against the bottom of the Pro 8. .

Annoyingly, the Pro 8 doesn’t come with the keyboard in the box and it costs an extra $300. This seems to be the way the market is going as we’ve seen this with a lot of other devices as well. To put it bluntly, it sucks. You can’t use the Pro 8 at its best without the keyboard so prepare to spend an extra $300 if you’re thinking about purchasing one.

Although the Surface Pro 8 is probably too big to carry around as a camera, it has a surprisingly decent front and rear camera array. The rear camera is a 10MP lens that can film in 1080p and 4K and the front camera is a 5MP lens that records in 1080p.

In a post Covid-19 world where Zoom calls are now the norm, this front camera is a great improvement on previous Surface Pro devices. It provides a good, clear picture when talking to relatives or when on work calls.

Microsoft’s claims that the Surface Pro 8’s battery lasts 16 hours are massively overstated. At normal usage I achieved about half of that at just over 8 hours.

At higher usage with the screen set to bright, that dropped to around 7 hours, which is still fine.

You can charge the device via the Surface Connect charger port, or its USB-C ports. The former is the fastest way to charge it. I achieved about 50% battery after a 35 minute charge which is pretty good.

The Surface Pro 8 is the best Surface device on the market.

With the release of Windows 11, it feels more like a proper 2-in-1 rather than a laptop that you can fudge as a bad tablet too.

The 120hz display is brilliant, vibrant and clear, the touch functionality is accurate and responsive, it looks great and it can handle anything you throw at it.

There aren’t many issues with this device, and the ones it does have are only minor, however there is one big red flag with the Surface Pro 8 and that’s its price. This is an expensive 2-in-1. There’s really no point in getting it in its base configuration, to get significant use out of it you’ll want at least 16GB of RAM which means the starting price is $2,399 with an Intel i5 or $2,769 with an Intel i7. Chuck on top the $300 for the must-have keyboard and you’re looking at $3,000 for a 2-in-1. It’s massive.

That said, if you do have the money this is easily Microsoft’s best Surface Pro device yet and definitely one of the best 2-in-1s on the market. You’ll love it.