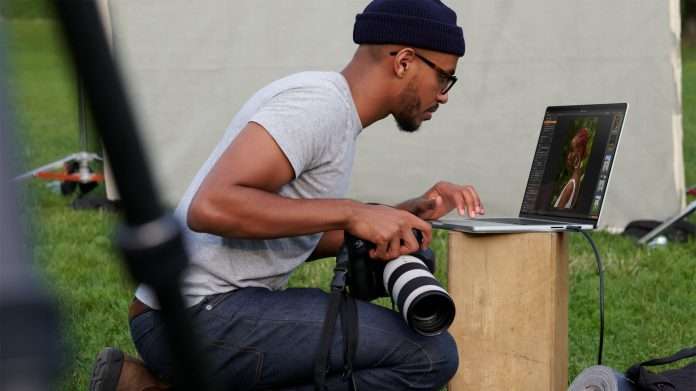 The new 14-inch MacBook Pro is a high-end laptop with so much power (thanks to the M1 Pro chip inside) that it’s overkill for the majority of consumers.

This isn’t a normal laptop meant for normal people. It puts the “pro” back in MacBook Pro. Apple is deadly serious about the “pro” here and has turned most of the specs inside this device up to 11 to appeal to a small number of users who need a laptop this powerful.

For the rest of us, Apple’s marketing rationale is more holistic: it hopes the power of the M1 Pro chip and MacBook Pro will inspire us to find a use for what it can offer, which feels a bit flowery to me.

What’s less subjective is how good this laptop is. It’s power, screen, speakers, design, ports, even webcam(!), and battery life is as good as you will find on any laptop.

But it’s not suitable for everyone. If you’re not a pro, I still think 2020’s MacBook Air and MacBook Pro are the better choices.

Putting a price on the MacBook Pro 14-inch is tricky, as it depends on which specs you opt for. However, the “entry-level” 8-Core CPU, 14-Core GPU, 16GB Unified Memory and 512GB SSD storage model costs NZ$3,399.

About that M1 Pro chip

The chip inside this laptop isn’t doing things that regular laptop chips do. It’s in a field of its own.

And that’s the big thing about this laptop – understanding what the new generation of M1 Pro and Max chips offer. is a big part of what makes the new MacBooks special.

You can almost ignore everything else the new MacBook Pros offer. Almost. It’s background noise to the chip inside. They’re all features that Apple does very well, but ultimately, other manufacturers can also achieve. Possibly.

The one thing other manufacturers can’t do, and won’t be able to do for a few years (I think), is produce a rival to the M1 Pro and M1 Max, and even the M1. This is an Apple-only thing. And it’s not about sharing.

And that’s why the achievements of all three M1 chips are so devastating. Intel, Microsoft, Google, Dell, AMD, NVIDIA, Samsung, Qualcomm, whoever. None of these massive tech companies, singularly or collectively, have anything close to an answer to the M1 yet.

There are two reasons for this: performance and efficiency. Ignore everything else you hear. This is the ball game.

But the one question hanging over the M1 was how would it handle pro-grade specs. Will the M1 be able to handle higher numbers of CPU and GPU cores that pro users need?

The answer to that question is “yes”. Easily. But it’s more nuanced than that. While the hype around the new MacBook Pro’s performance is real, it’s not exclusive to the M1 Pro (and Max) chip.

If raw power and muscle is your thing, then there are already Intel- and AMD-shaped alternatives to Apple’s M1 whanau. There are other laptops out there – Dell Precision 7560, Alienware x17, HP ZBook Power G8, Lenovo Legion 7i (2021), whatever – that can compete, or even beat, the MacBooks in terms of performance – or Benchmark scores, at least.

In fact, the M1 could, in specific scenarios, be a modest choice compared to some of the competition – until you switch to battery, then everything changes. Performance-per-watt is the difference.

The relationship of power and performance has, traditionally, been an uncomplicated one. Take away the power, and you also take away the ability to increase performance.

Apple mocked its competition during its keynote, when it presented a chart that showed how its power consumption curve per watt was a lot better than the competition.

“Now let’s compare the M1 Max to the chip running in the fastest PC laptop we could find”, Apple’s SVP of Hardware Technologies, Johny Srouji, joked during the event.

The point he and Apple are making is an important one, though. Stating that at the M1’s peak power consumption – which is 30W – they deliver 1.7x the performance of the best PC chip (that Apple could find).

The same applies for the GPU performance. But more so. At its peak, Apple says it’s 7x faster than its PC competition. And proves it with another lightly-labelled graph.

And this is what I’ve been wrestling with all week – trying to properly put the 14-inch M1 Pro MacBook through its paces to test Apple’s claims.

I am a long way away from the “pro” user Apple is aiming these laptops at. Fortunately, the review sample I was given came preloaded with some heavy-duty programs and some even heavier files.

I opened up Cinema 4D, Logic Pro, Final Cut Pro, Adobe Premiere Pro, Affinity Photo all at the same time and created chaos with the beautiful projects I was given – in an attempt to engage the fans and witness a slow-down in performance.

There are two obvious mea culpas from Apple with the new generation of MacBook Pros. The resurgence of useful ports and the restoration of function keys on the MacBook’s keyboard.

Apple’s lack of flexibility is sometimes a good thing. It creates an environment of total commitment at Apple Park where designers pin back their ears and create the best products they can without compromise.

A lot of the time, it works. The world just accepted it when Apple confiscated the headphone jack from the iPhone – and Apple’s bold decision accelerated a Bluetooth headphone revolution. And the world is better for it, I think.

The return of function keys, MagSafe charging, an HDMI port and an SD card slot are examples of Apple acknowledging that it thinks it got it wrong.

And while the majority of users will be happy to see the Touch Bar replaced with physical keys, the return of MagSafe, and USB-C ports replaced with dedicated ports – I’m not entirely convinced backing down was the right decision to make.

The Touch Bar was a great way to bridge the gap between the keyboard and a full-fat touchscreen laptop without users having to lift their wrists off their desks. And HDMI and SD card ports are unflexible, single-use ports. And I think MagSafe was only reintroduced due to complications with USB-C charging technology. Though, the anti-trip “safe” feature of MagSafe is welcomed.

This is an area where the “pro” in MacBook Pro is underscored.

What all these screen specs equate to is something quite simple. It’s the best tech Apple has ever put in a MacBook. The 120Hz screen combined with the high-end Liquid Retina XDR display is a stunning combination. It’s the first laptop screen I’ve used that has a real “wow” factor.

And then there’s the notch…

The “notch” on the MacBook Pro makes me think Apple is glutton for punishment.

On the one hand, it contradicts so many things that Apple stands for from a design perspective. You can’t argue with anyone who is of the opinion that it’s a hack job with a professional veneer that only Apple can pull off.

On the other hand, it’s also an innovative design decision that takes a historically wasteful part of the screen/bezel and turns it into valuable screen real estate. It’s Schrodinger’s Cat on an Apple laptop. Both dumb and brilliant at the same time.

The reality, as always, is somewhere in between. The clever thing about the notch is that it sits in the menu bar, which means you won’t notice it most of the time. But when you do notice it –  like, when you need to use something that normally resides in the middle of the menu bar, for example – it’s a bit of a pain.

The benefits it brings is undeniable, though. More screen and a (finally) 1080p camera on the MacBook Pro. This isn’t a pro-grade selfie camera, though. A 1080p webcam on the MacBook is long overdue. But the improved clarity of FaceTime, Zoom, Google Meet, Webex and whatever calls is noticeable.

The only niggle with this notch is that Apple didn’t bring FaceID or Centre Stage technologies with it.

Excellent speakers (as per)

Apple sussed out the technology needed for great-sounding laptop speakers when it released the 16-inch MacBook Pro in 2019.

This device continues the run of great-sounding speakers with a high-fidelity six-speaker sound system and four force-cancelling woofers.

The sound is rich, deep, confident and competent; there is no better sounding laptop.

As per the last few high-end MacBooks, there’s also the standard studio-quality three-mic array with a high signal-to-noise ratio and directional beamforming.

There’s also a 3.5mm headphone jack with advanced support for high-impedance headphones. This is an upgrade on older MacBooks that only offered standard 3.5 headphone jacks.

It’s a thick laptop. That’s the most striking thing you’ll notice when you take the MacBook out of the box. Those of you who remember the old MacBooks that came with CD drives will feel a pang of nostalgia when you see this device for real.

I’m stuck in two minds about how to feel about this. Thick laptops are obviously undesirable. But the MacBook Pro’s main job is to be a pro-grade laptop, and if that means being a thick laptop too, I think it’s an acceptable design decision to make.

The next major talking point is the keyboard. The butterfly technology is already a distant memory, and this Pro turns things up another level with an increased travel distance for the keys.

Apple suggested the Backlit Magic Keyboard was more mechanical-y in how it felt, but the reality isn’t quite as extreme as that. Yes, there’s a tad more bounce and travel to this keyboard than previous MacBooks, but it’s a long (long) way from being anything close to a mechanical keyboard.

The 14-inch MacBook Pro is a lot of laptop.

It offers a lot of things a lot of people will find useful too: its screen, speakers, webcam, battery life, a smattering of ports – these are all good things normal folk will like.

However, the single most important thing inside is its M1 Pro chip. It’s a power-hungry lunatic. In a good way. And unless you’ve got a really specific reason for needing an Apple laptop with this much power, I’d suggest you’d be better served by 2020’s MacBook Pro or Air laptops, which are considerably cheaper.