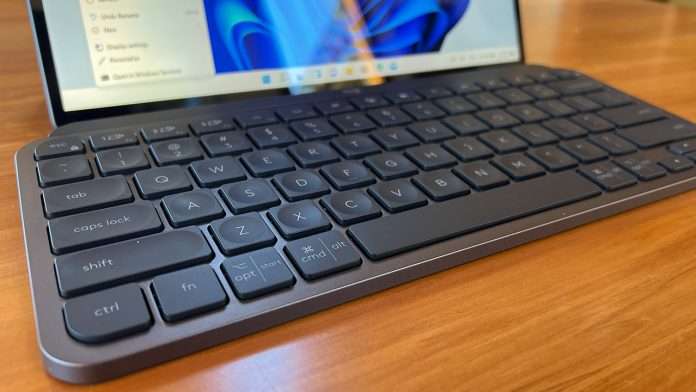 It’s well designed, comfortable to type on and excellent for working in multi-device environments.

Compatible with both Mac and Windows, this is one of the best wireless keyboards on the market – but be prepared to pay quite a bit for it.

The MX Keys Mini is exactly what it says it is, it’s a smaller version of Logitech’s 2019 MX Keys keyboard. And it’s just as good.

This is a keyboard that’s designed to be used by creatives or commuters who are constantly changing computers. It isn’t for gaming and if you’re sitting at the same desk all day, it might not suit you as it lacks a numpad.

Compatible with both Mac and Windows devices, the Mini is oddly pleasing to type on. It has ergonomic keys, that Logitech has specifically designed for fingertips, and they’re comfortable and responsive. The keys aren’t mechanical, but they have a tactile spring to them that provides a mechanical feeling. It also means they don’t produce the tapping sounds synonymous with mechanical keyboards which is a bonus if using it in a busy environment.

Although this is a small keyboard measuring 29 x 13 x 2 cm it doesn’t feel small. It’s well spaced and it didn’t feel any different to my larger mechanical Razor keyboard. But as is the case with all small keyboards, larger people will have to hunch in and round their shoulders to use it.

The keyboard doesn’t come with a case but it’s strong enough to handle bouncing around in a bag.

One obvious design flaw is the inability to change the angle of the keyboard. It has a stand at the back that isn’t adjustable. Users who prefer a keyboard flat on their desk won’t be able to do that with the Mini, which feels like a mistake.

The MX Keys Mini comes in three colours, Pale Grey, Graphite and Rose and they all look good. It also has decent backlighting that effectively illuminates the keys.

In the MX Mini’s function row, there are some particularly useful keys. It has everything you’d expect but introduces some useful other features like system mute, emojis and a dictation key. All of which work well.

Pressing the emoji key will give you a list of emojis you can insert into your work or messages, the dictation key will open up your device’s default dictation software so you can use your voice to type and the system mute key does exactly what it says. At first these don’t sound like amazing features but they work seamlessly. And combined with the MX Keys Mini’s capability to switch between devices on the fly, they truly come into their own.

The MX Keys Mini’s best feature is its Easy Switch compatibility. You can connect the MX Keys Mini to up to 3 devices via bluetooth. At the top left of the keyboard there are three keys that let you switch between these devices. If you’re using the keyboard to type on your PC, you can pair it with your laptop using the Logitech Options software.

You can assign your laptop to one of these keys and pressing it will switch the keyboard to your other device and you can continue typing without any delays. It’s incredibly useful for creatives with multi-device setups.

The MX Keys Mini is completely wireless. It uses Bluetooth, and doesn’t support wired connections at all.

It’s compatible with both Mac and Windows devices and it also supports Logitech Flow technology.

Combining the MX Keys Mini with a Logitech Flow compatible mouse will enable you to type on multiple computers, based on where your mouse goes. If you have a multi-device setup: move your mouse to either of these devices and type with the MX Keys Mini. It’s fluid and helps speed up workflows.

The MX Keys Mini is compatible with the Logitech Options software which allows you to customise the function keys. It’s easy to do and it’s useful to have if you don’t like the default layout.

The battery on the MX Keys Mini is very good. With backlighting on, we achieved around 9.5hours of continuous use.

Logitech claims that the Mini keyboard will last up to 5 months with backlighting turned off. We haven’t quite reached that time frame yet, but the battery life has only seen minimal reductions in the two weeks we’ve used it without backlighting.

The MX Keys Mini charges via a USB-C port, however that’s all that port does. You can’t use it to connect the keyboard to your computer.

If you’re looking for a small but sturdy portable wireless keyboard then Logitech’s MX Keys Mini is one of the best on the market.

This keyboard comes into its own when being used with multiple devices. This is because of its effective Easy Switch features and its compatibility with Logitech Flow.

It has useful function keys like dictation, system mute and emojis, it has a decent battery, it’s wonderful to type on and most importantly it will speed up your workflow.

It’s more expensive than the competition, it doesn’t have an adjustable stand and it’s not for gaming but overall, if you’re someone who wants to increase their workflow – and you have a multi-device setup – you’ll love Logitech’s MX Keys Mini.