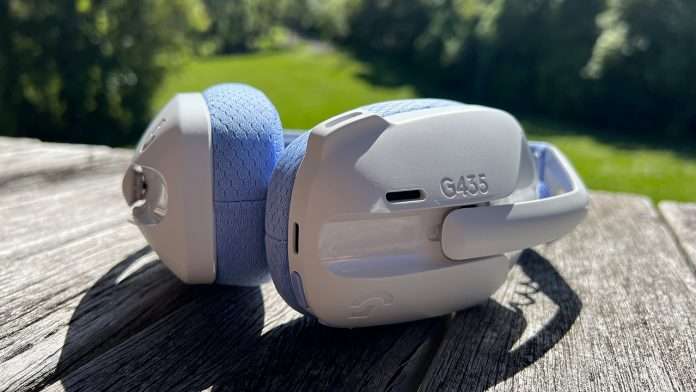 The Logitech G435 is a mid-range, no-frills gaming headset.

This isn’t a headset for audiophiles that want to customise and equalise their sound, nor is it trying to compete with the best the market has to offer. Instead, it focuses on simplicity. Just plug it in, and it works – no frills.

Importantly, for a gaming headset, it’s comfortable to wear and is compatible with Lightspeed and Bluetooth connectivity. But, it’s let down by its poor microphone and price.

It’s $250 price makes it hard to recommend though, as there are similar headsets on the market available for much less.

The Logitech G435 costs $250, which is relatively expensive for this mid-range headset.

For comparison, the PS5 Pulse and the Razer Kraken BT, which boast roughly the same features and performance, cost $179, respectively, which is just under $100 cheaper than the G435.

The G435’s design is its best feature. It feels great. This is the lightest gaming headset I’ve ever used, and it’s comfortable.

It only weighs (165g which is very light). For comparison: the headset I use every day – the Audeze Mobius – weighs 350g and the difference is noticeable.

This (lack of) weight does come with some drawbacks, though. It can feel flimsy and weak. For a headset designed for younger generations, who probably don’t take as good care of their expensive headsets as they should, that could pose a problem. But I couldn’t fault it for its comfort.

Its design is more youth-oriented, and that’s reflected most prominently in its colours. The G435 comes in three colours, Black and Neon Yellow, Blue and Raspberry and Off-White and Lilac. For my review, I was given the Off-White and Lilac version, and it looks great. While it’s not quite my personal colour preference, it’s instantly more interesting to look at than my all black Audeze Mobius headset. It’s vibrant and noticeable.

To add to the “coolness,” Logitech has designed the G435 with the environment in mind. It’s made of 22% recycled plastic, it’s carbon neutral and comes in responsible packaging.

Note that Logitech has stated that the G435 is better suited to smaller heads. I wouldn’t pay too much attention to this unless you have an extreme-size head as I, sadly, have a considerable amount of head – and an even bigger Covid-19 lockdown mop of hair on top of it – and found I could wear them all day comfortably.

The G435 uses Lightspeed Wireless technology which “is a wireless solution that delivers low-latency and reliable performance.” And it works well. The headset comes with a dongle that you plug into your PC, Mac, PS4 or PS5 (it’s not compatible with Xbox consoles) and the headset connects. It’s as easy as that. There are no customisation options or fiddly equalisers – plug it in, and it goes.

It’s also compatible with Bluetooth, so you can use it with your phone or whatever. It’s simple and effective. For someone who doesn’t want to take time to optimise their audio and muck around with settings, it’s great.

On the left earcup, there are volume controls, a power button and a mute mic button. It’s basic, but the main controls you need are here.

The G435 has 40mm drivers in each earcup, and it performs exactly as you’d expect a mid-range headset to perform.

It struggles with deep bass sounds, and at higher volumes, it can sound muddy. However, it does an adequate job. If you’ve had the luxury of using a premium headset, you’ll immediately notice the lack of audio quality but for someone who isn’t an audiophile, the sounds the G435 produces will be fine.

The mix also lacks depth. Playing games with surround sound didn’t provide as much of a “noise is coming from everywhere” feeling as other headsets I’ve tried.

It doesn’t have ANC capabilities. If you’re looking to drown out outside noise, you’ll have to turn them up loud. This isn’t great for two reasons, the audio quality lessens at these high volumes, and the G435’s aren’t great at isolating noise, meaning people beside you can hear your audio coming out of the headset. I tested this with my partner sitting beside me, and she could quite easily hear almost every element of the music I was listening to. Not ideal for public transport.

The microphone sounds “echoey”, with a sound that comes across like you’re far away from the microphone, kind of like when you’re talking to someone over the phone via the speaker.

It also struggles at higher volumes, in intense gaming sessions yelling “GRENADE!” in Hell Let Loose or screaming when a zombie grabbed me in Back 4 Blood, people in my team complained that it was distorted and annoying.

To add to the microphone woes, it’s also poor for picking up outside noise. If you’re planning on playing games in a noisy environment, prepare to have your friends or teammates complaining about the TV in the background.

“If you’re planning on playing games in a noisy environment, prepare to have your friends or teammates complaining about the TV in the background.”

The G435 has a good battery life at 18 hours off a single charge. It’s plenty.

It charges via the USB-C port on the left earcup and only takes a few hours of charging to get to 100%.

It’s capable of producing good-quality sounds but does struggle with bass frequencies and high volumes. But these aren’t major issues. It’s fine for gaming and listening to music. Only audio enthusiasts will notice the lack of audio quality.

The major issues lie with its microphone and its price. The beamforming mic is very poor. While friends and teammates will be able to hear you, they won’t like it. The mic quality isn’t great, and it picks up a lot of outside noise.

It’s also expensive for what it is. It’s almost $100 more expensive than similar headsets on the market, and there’s nothing here that makes it worth that extra money.