JBL Quantum ONE headset review: A good gaming headset, at its best on PC!

06/10/2021
0
0
HomeReviewsJBL Quantum ONE headset review: A good gaming headset, at its best...
ReviewsHeadphone

JBL Quantum ONE headset review: A good gaming headset, at its best on PC! 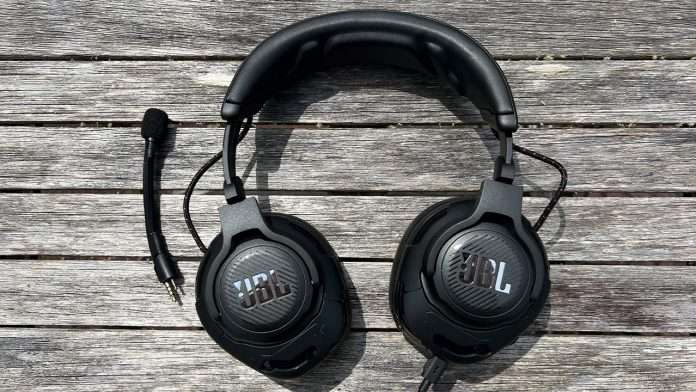 The JBL Quantum ONE is a mid-range wired headset that’s packed full of features. It has ANC capabilities, 360 Spatial Sound, head tracking, a chat-game mixer and it can produce good audio performance.

All of these features don’t match the high quality set by the best-of-the-best gaming headsets, although for $549 they work well. However, only on PC.

While JBL states the Quantum ONE is compatible with consoles, its most significant features – like spatial audio and head tracking – are not.

If you’re looking for a mid-range headset for console gaming that has all the premium features, then this isn’t it; however, if you’re a PC gamer, you’ll be happy-enough with the Quantum ONE.

The JBL Quantum ONE costs $549. To put that into perspective, the gaming headset we deemed one of the best on the market – the Audeze Mobius – costs $749.

The Quantum ONE has a futuristic design that clearly defines it as a gaming headset. While you can use it with portable devices (via its 3.5mm jack) it isn’t as subtle as other headsets like the Audeze Mobius and it may look a bit odd wearing to work or on a commute.

It’s a large headset – the earcups are huge – however it’s light and very comfortable. The cups are covered with soft leather and are made from memory foam padding that stays snug for hours of use. For a large headset, I was impressed by how long I could wear the Quantum ONE without it becoming uncomfortable.

Both earcups have flashy LED lights that come alive when the headset is plugged into a USB-A port. The JBL logo lights up and jagged lines around the edges of the earcup light up as well. It looks cool and the colour spectrum can be easily customised via the QuantumENGINE app. Perfect for someone who’s looking to match the LEDs with other accessories. Unfortunately, the LEDs don’t turn on when plugged in via the 3.5mm jack.

The Quantum ONE is a wired headset that’s compatible with all major consoles. However, it’s important to know that this is via the 3.5mm jack. The only devices that support the USB connection are PCs, Mac, the PS4 and the Nintendo Switch when it’s docked (I wasn’t able to get the Quantum ONE to work with my PS5 via the USB port)

It’s also important to know that although the headset is compatible with some consoles via USB connection, features like 3D Spatial Audio and head tracking are only available on PC.

The headset’s USB-C to USB-A cable has a chat mixer roughly halfway down. This is a small puck-shaped device that allows you to increase audio coming through apps like Discord, Skype or TeamSpeak while decreasing audio coming from a game, and vice versa it’s great (more on this below)

The left earcup houses the controls. There’s an ANC on/off switch, a volume knob, a centering button for head tracking and a mic mute button. This is all you need and it’s spread out in an easy to use way.

The Quantum ONE comes packed with premium features and not all of them hit the mark.

The QuantumENGINE software allows you to customise your sound (on PC) and set up features like 360 Spatial Sound. It comes with an equaliser that works well. Changes I made were easily noticeable and there’s a good range of presets to select from.

To set up the 360 Spatial Sound which JBL calls “JBL QuantumSPHERE 360,” the headset comes with a calibration mic that’s used to measure the sounds going into your ears and determine the best way to deliver the sound. While the process was easy, it wasn’t as effective as other audio devices – like the Nura True earbuds that also incorporate this technology. Using QuantumSPHERE 360 definitely added a more rounded and spacious sound when compared to stereo configurations, but it wasn’t a significant difference.

The Quantum ONE also supports head-tracking where the headset tracks your head movements and plays the sound accordingly. Moving my head to the left, the sound would sound more dominant in the right earcup. This worked well but I never had a need for it. When I’m playing games, 99% of the time I’m staring straight at the screen, very rarely do I turn my head for the tracking to be significant. However, I can imagine this would be great for multi-monitor setups playing racing games or titles like Microsoft Flight Simulator.

One of my favourite features was the game-chat mixer. This feature is officially supported by Discord and other apps like TeamSpeak and Skype. It allowed me to turn up the volume of friends I was talking to in Discord while turning down the volume of the game, (and the other way around) on the fly. It meant I didn’t have to minimise my game to turn my friend’s microphone up, I could do it simply by rotating the dial.

The mixer is hardwired, you cannot take it off. The dial is smooth and is well-made, however, there could have been more controls on the mixer, and I did find it hard to place. It has rubber grips on the bottom so it won’t come off table tops, however, the cable is long. I sit close to my PC which meant the cable had a significant amount of slack  I would have to put in my lap. And if it wasn’t on the desk I could feel the weight of it hanging free. It took a significant amount of trial and error to get right and it was annoying, but once I sorted it I found it very useful.

The Quantum ONE produces a good sound. When compared to the best of the best, the Audeze Mobius, there’s no comparison however for $200 less I enjoyed the headset’s capabilities.

Being able to equalise the sound to exactly how I wanted it, was simple and effective. But I did find them to be quiet. Using my PC I would have my Audeze Mobius on volume level 25 and the Quantum ONE on 70 just to reach the same sound. And at these levels, audio sounded slightly distorted and tinny through the Quantum ONE.

The soundstage also didn’t feel as wide as the best of the best headsets. The 360 audio felt thin and I didn’t always feel like I was surrounded by sounds. But these were only minor inconveniences.

Playing games with the Quantum ONE was perfectly fine. I could easily locate footsteps around me playing Rust and the headset did a good job at balancing the quieter dialogue audio with the louder gunshots and explosions when playing games like Wasteland 3.

The audio performance was also good for listening to music, however, it did run into the same problems with distortion at higher volumes.

The microphone wasn’t great but it was adequate.

The Quantum ONE has a boom mic that can be removed, and my friends could hear me clearly enough through it. However the mic did pick up outside sounds often, even if those sounds were relatively quiet.

We also noticed that if I raised my voice and yelled in the heat of the action, my voice would be distorted and a bit scratchy. But other than that, it worked as it should.

If you’re a PC gamer, JBL’s Quantum ONE headset has a large array of desirable features. If you’re a console gamer, while the headset will work, the Quantum ONE probably isn’t for you. That’s because the vast majority of the Quantum ONE’s premium features like 360 Spatial Audio and head-tracking are only available on PC.

When using the headphones with a PC, the ANC isn’t very effective. Overall the audio performance is okay, however the QuantumSPHERE 360 audio doesn’t produce a massive surround sound feel and the microphone distorts at loud volumes.

However, all of these features are adequate. You won’t notice their lack in performance unless you’ve used the best of the best headphones. If you’re upgrading from cheaper headphones you’ll notice a massive boost in quality.

For someone who can’t afford to pay $749 for a gaming headset, at $549, the Quantum ONE works very well and you’re going to love it, but only if you’re on a PC.

Facebook
Twitter
WhatsApp
Linkedin
Previous articleWindows 11 released: here’s how to skip the queue and get it now
Next articleInterview with CENNZnet’s Nicole Upchurch – on its new Litho NFT marketplace and why she’s a blockchain believer