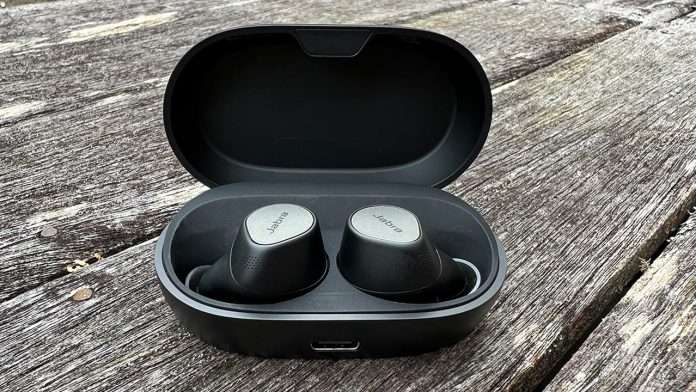 In a market as competitive as the wireless earbud market it can be hard to stand out, especially when you’re going up against big players like Apple, Bose and Sony.

Jabra’s Elite 7 Pros provide most of what you’d expect from a mid-range pair of earbuds, good sound, okay ANC, and a decent battery life. Where they stand out is in their design and their microphone quality.

These are some of the most comfortable earbuds I’ve used and the four built-in microphones use VPU (voice pick-up) technology to easily pick up your voice when on a call, even in windy conditions.

The Elite 7 Pros aren’t without their issues though. Where these earbuds are let down is their connectivity. While the earbuds connected fast with my iPhone, they’re not compatible with smartwatches.

In a market as competitive as this, earbuds need to at least be able to do everything their competitors do. And the difficulty connecting the Elite 7 Pros to my smartwatch left a sour taste in my mouth. Especially when cheaper earbuds have that functionality.

One of the best things about the Elite 7 Pros is their design. These are comfortable, lightweight earbuds that I could wear for hours on end. As a predominantly over-ear headphone user, I’ve found some earbuds hurt my ears after a couple hours of use. Not the case with the Elite 7 Pros, I could wear them endlessly without trouble.

They pushed quite far into my ear and sat nicely. This created a secure and tight seal that’s not only comfortable, it also alleviated concerns I had in regards to the earbuds falling out. And assisted the ANC by creating passive noise isolation. They come with three sets of silicon eartips, small, medium and large which I think is enough to fit almost anyone. The Jabra Sound+ app comes with a handy fit test so you know if you need to change size.

Impressively, the Elite 7 Pros have an IP57 resistance rating, this means they can be submerged underwater for 30 minutes up to a meter and they’re almost completely dust-tight. Most earbuds on the market have an IPX4 rating, which means they’re untested for dust. While this might not seem like much, it means you could take the Elite 7 Pros to the beach, bury them in sand, and they’ll be unaffected.

The touch controls are physical buttons. This is a step away from what premium earbuds are doing with their touch sensitive controls, but it’s a difference I appreciated. It’s more accurate and incorrect inputs happened a lot less. They do push into your ear a bit when you use them, but it wasn’t enough to be annoying.

I was disappointed with the touch customisation options though. You can pause, skip and repeat tracks, answer calls, turn ANC and HearThrough (Jabra’s version of Ambient Noise) on/off and initiate your chosen assistant. But there were no volume options, which I think is an important touch control.

If you want to get the best sound out of the Elite Pro 7’s you’ll need to download the Jabra Sound+ app. The app is intuitive and provides a good amount of customisation options. You can EQ the sound to your personal preferences and the earbuds will test your hearing and adjust the sound accordingly.

Jabra’s hearing test is a long way off the effectiveness of the NuraTrue earbuds test, and unfortunately there’s no way to flick between the adjusted sound and the non-adjusted sound to hear the difference. You’ll just have to assume it’s doing something.

With their default EQ settings I found the earbuds lacked bass and sub capabilities. Listening to Heavy Bells by J. Roddy Walston and the Business, the kick drum didn’t have the driving oomph that I like. This could be slightly remedied using the EQ, however I did find that turning the bass up would mean I sacrificed the sounds of other frequencies. It drowned them out and muddied the mix.

Similarly, listening to Find Your Cloud by Papadosio, which is a song with a lot going on, the mids and the highs were easy to identify in the mix, but were often overpowered by my enhanced bass. Changing to a more neutral EQ setting meant I lost that bassy drive.

Trying to find a good middle ground with the EQ was difficult as the presets the app provides were relatively useless. But overall the sound quality was decent for a mid-range pair of earbuds.

The ANC is okay. They don’t compete with the best of the best, the Bose QuietComfort or the Sony WF-1000XM4 but for earbuds at this price, the performance is to be expected.

You’ll certainly notice a difference when comparing them to earbuds that don’t have ANC, but they simply don’t cancel out as much noise as the premium earbuds.

The ANC is aided by their design. The tight, secure fit means that they produce a good amount of passive noise isolation on their own. Paired with the ANC and it’s a respectable performance.

The HearThrough functionality works as it should. The microphones in the earbuds pick up outside noise and play it into your ears. It’s fine.

The microphones are some of the best I’ve used in earbuds. With four microphones built-in, they were able to clearly pick-up my voice, even when I was talking quietly.

To add to their impressive capabilities the microphones use special sensors that automatically activate when in windy conditions. When these sensors kick in, the earbuds transmit your voice through vibrations in your jawbone.

Standing in an open field on a particularly windy Auckland day, my partner could hear every word I said. She couldn’t hear any wind. It’s impressive.

Connecting to the Elite 7 Pros was hit and miss. At first I was happy with how quickly my iPhone picked them up and connected. It wasn’t until I tried to connect them to other accessories, that I ran into some frustrating issues.

After spending a few hours trying and failing to get the earbuds to connect to my Apple Watch and my partner’s Garmin watch, I contacted Jabra about it. They said “Jabra devices are designed and engineered to provide sound quality for calls and music listening. They are optimised to be used with other Bluetooth devices such as smartphones and tablets. The use of a Jabra device with a smartwatch may not provide the best experience and is not officially supported.”

It left me perplexed. Why? Why aren’t smartwatches supported? The earbuds use Bluetooth 5.2 and even much cheaper earbuds support smartwatches.

It’s a frustrating omission and means that if I wanted to go for a run I would have to carry my phone with me.

In our tests, the Elite 7 Pros lasted a respectable 8.5 hours with ANC turned on. With the case included, the earbuds have a total battery of 30 hours without charging.

They also support fast charging and a single 5 minute charge will give 1-hour of playback.

The best features of Jabra’s Elite 7 Pro earbuds are their design and phone call capabilities. They’re comfortable, light, secure, and they easily pick up my voice, even when standing in some intense wind.

The sound quality these earbuds provide is right where it should be for a $329 pair of earbuds. The bass is lacking but they sound fine overall.  The situation is the same when it comes to ANC, it’s not quite as good as the best earbuds available but it does the job.

The battery is decent and the Jabra Sound+ app has helpful fit tests and hearing tests that make sure the buds are customised to you.

All this is fine, but it’s hard to get past the earbuds not supporting smartwatches.

In a market as competitive as this, mid-range earbuds need to be able to do everything their competitors do.

With that said, if you’re looking for earbuds for taking and making calls, you’ll love Jabra’s Elite 7 Pros, but if you want to be able to use your earbuds when working out or running, there’s better options out there.