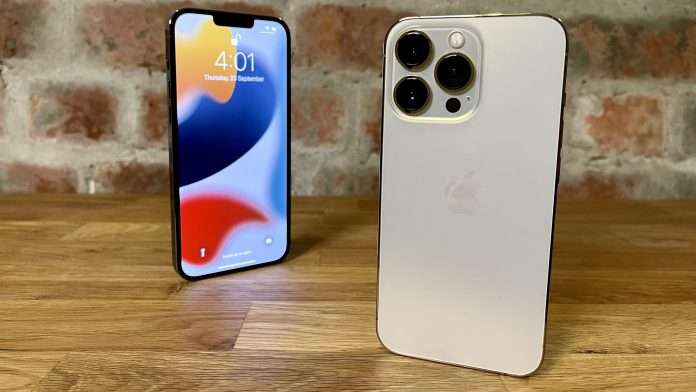 And as the name suggests, the iPhone 13 Pro and Pro Max are not the phones that Apple have designed for the average user (see the iPhone 13 and 13 mini review). Apple has turned the camera, screen and battery up to 11 with these devices (and the prices too).

Meaning that unless you have a strong desire for super high-end smartphone photography, or you just want a large-screened iPhone, the iPhone 13 is probably a more sensible choice.

Both the 13 Pro and Pro Max also come in four colours, Sierra Blue, Silver, Gold and Graphite and they all look premium and slick.

There are two subtle differences, though.

The first is the 20% smaller notch on the display. And the second is the larger camera bump on the rear. The new camera array is 38x37mm, and it takes up over half of the phone’s width. The tradeoff here is that Apple has made its Pro cameras even better (more on this below).

ProMotion is made possible by the Low-Temperature Polycrystalline Oxide (LTPO) OLED display Apple has used on the iPhone 13 Pro.

This display allows for high-refresh rates when performing actions on your phone that require it, like gaming or scrolling through social media, and it can lower the refresh rate for less demanding uses like reading a book.

This technology enables ProMotion to change the display refresh rate between 10Hz and 120Hz.

As an example, if you’re watching a 60fps video on YouTube, ProMotion will set the display refresh rate to 60Hz which isn’t as battery hungry as 120Hz.

The iPhone 13 Pro running iOS 15 at 120Hz looks and feels buttery smooth, and iPhone veterans coming from previous models will notice the difference.

However, 120Hz LTPO displays are a feature that Android phones have had for a while now, we saw it with Samsung’s Galaxy Note 20 Ultra, and it feels like Apple have just caught up to the competition as opposed to innovating the industry.

But, putting that aside, the iPhone 13 Pro looks and runs very well, and anyone who hasn’t used a 120Hz device will instantly notice the improvements.

The iPhone 13 Pro and Pro Max devices are rapid. This is an area where Apple has always blown the competition away and now, thanks to the new A15 Bionic Processor, that lead has just grown again – nothing else comes close.

The iPhone 13 Pro and Pro Max don’t have the same A15 chip that the standard iPhone 13 has. This A15 has an additional GPU core (5 in total) and 6 CPU cores (4 energy-efficient and 2 high-performance).

The A15 also boasts 15 billion transistors compared to the 11.8 billion used by the A14 processor. It’s a beast.

When using the iPhone 13 Pro for graphically intensive games, video editing and photos/video I didn’t come across the slightest hiccup or stutters.

The main benefit of the A15 is how efficient it is. This processor lends itself well to the increase in battery size found in the iPhone 13 Pro (more on this below). While of course playing games on the iPhone 13 Pro used more battery than reading an e-book, I was impressed at the little battery I had used after a reasonable amount of gaming.

Cameras: Let there be light

The iPhone 13 Pro and Pro Max take amazing photos. That shouldn’t be a surprise to anybody, as that’s precisely what new iPhones are supposed to do.

The difference this year – other than both the Pro and the Pro max having identical camera rigs – is that the Pro devices have been designed to do one thing better than all of their predecessors: let in light.

This, as anyone who takes photography seriously, will already know, is the single most important thing in photography. More light equals better photos and the iPhone 13 Pro and Pro Max feature several hardware upgrades that allow it to let in more light.

The one slight anomaly is the Telephoto lens has decreased to ƒ/2.8 aperture from the Pro Max’s ƒ/2.8. However, this is balanced out by the 77mm lens that delivers 3x optical zoom compared to the 2.5x optical zoom on last year’s iPhone 12 Pro Max.

What all this confusing photography jargon means is actually quite simple, the iPhone 13 Pro and Pro Max devices take the best pictures of any iPhone.

I spent a few hours testing the iPhone 13 Pro and Pro Max’s cameras and the most obvious improvement is its Macro photography. Its performance with close-up subjects is a point-of-difference for the iPhone (see examples).

Apple made big noises about the new Pro devices performance in low-light scenarios, and while I can see an improvement here compared to the 12 Pro devices, I have to work hard to see the gains. Below is a picture of the natural lighting of the shot and beneath that is how each phone performed.

The main wide-angle 12MP ƒ/1.5 sensor is a bigger sensor and it can take in a massive amount of light. In low-light photos, darks stay dark while lighter areas are suitably exposed to stand out from the darker areas. This larger sensor, combined with the computational improvements of the iPhone 13 Pro, create fantastic detail in low-light photos.

And of course, it takes great photos in well-lit areas as well.

The Ultra Wide, ƒ/1.8 aperture and 120° field of view, lens has also been improved. Slightly. It’s now compatible with autofocus and, as I said above, this allows for detailed macro photography.

There’s also a new telephoto, ƒ/2.8, lens with a 3x optical zoom. This lens creates stunning images at 3x zoom. They’re crisp and clear and don’t have the muddied effect of digital zoom. It’s a great improvement. Yes, the ƒ/2.8 aperture is a drop from the iPhone 12 Pro’s ƒ/2.2 but the improved zoom lens compensates for that. It’s also compatible with night mode, and any drop in light capture (due to the lower aperture) is quickly nullified when switching this mode on.

You can see that the iPhone 13 Pro Max maintains the same level of detail and quality when using 3x zoom. Compared to the iPhone 12 Pro Max’s 2.5x zoom.

Apple confirmed that you will also be able to shoot in the ProRes format, which sounds like a great feature for video editing, though this is a feature that will be rolled out in a later software update. It’s important to know that ProRes in 4K 30 fps is only available on the 256GB, 512GB, and 1TB models. The 128GB version can only film in ProRes at 1080p 30 fps.

Photographic Profiles is a feature that allows you to change the default way your iPhone 13 Pro takes photos based on a style that you like. It’s a bit like adding a filter, or predefined settings, to a photo before you’ve taken it.

It works using Apple’s computational photography software called Smart HDR. Cleverly the iPhone 13 Pro doesn’t simply alter everything in the picture, it uses computational information to decide what it sees and adjusts the photo accordingly. For example, it will recognise grass or faces and adjust the colours of your photos without changing what can stay natural (like human faces and skin tones). That means no more purple grass with filters.

When using Photographic Profiles the phone will take several different pictures with different settings and then create one to match your profile and it comes with presets that you can customise using warmth and tone sliders.

If this sounds like a gimmick to you, I have good news. You can turn it off with the press of a button.

The more impressive new feature is Cinematic Mode. This is similar to portrait mode for photos except it works on videos. It will automatically blur the background while keeping a subject in focus. Cinematic Mode is also intelligent – if your subject turns his/her head away from the camera to look at something/someone the video will automatically adjust the focus to replicated “rack focus”.

The phone lets you switch between focus modes on the fly and the benefit is that it creates more cinematic-y shots.

You can also edit the focus after capturing the film. Be aware that this is only possible in the Photos app on the iPhone and in Final Cut Pro, it’s not possible if you’re using other editing suites like Adobe Premiere Pro.

Unfortunately, Cinematic Mode isn’t a polished product right now. It relies on AI to figure out what a subject is and what it needs to blur out, and from my goofing around, I noticed it struggling with blurred areas. This is something that Apple will likely finesse as the feature matures.

Another drawback with Cinematic Mode is it only records at 1080p and 30fps.

The iPhone 13 Pro Max’s battery is the best in the business. The battery life of this device is massive.

I was able to use the 13 Pro Max, all day, performing battery hungry actions like gaming and video editing all at 120Hz and the battery lasted (by my rough estimates) roughly 3 hours longer than the iPhone 12 Pro Max. Note that I haven’t put the iPhone 13 Pro through the same level of testing yet.

The iPhone 13 Pros charge at 20w via a cable and 15w via MagSafe. This is slow especially as we’re seeing phones like the OnePlus 9 Pro which can charge at 65w over a cable or 50w wirelessly. The wisdom of this, perhaps, is less battery degradation over its lifetime.

The devices are exactly the same (apart from the size and battery capacities) and the performance of the onboard camera rigs is way ahead of the competition.

Stir in the boost to battery life and Apple finally bringing 120Hz displays to its smartphones, and its impossible to ignore just how good these smartphones are. The question you should ask yourself is whether you really need to pay for the pro-grade specs and features these devices offer. If you’re not sure if you’re “pro” enough, I’d suggest taking a look at the also-excellent iPhone 13 instead. It doesn’t disappoint either.