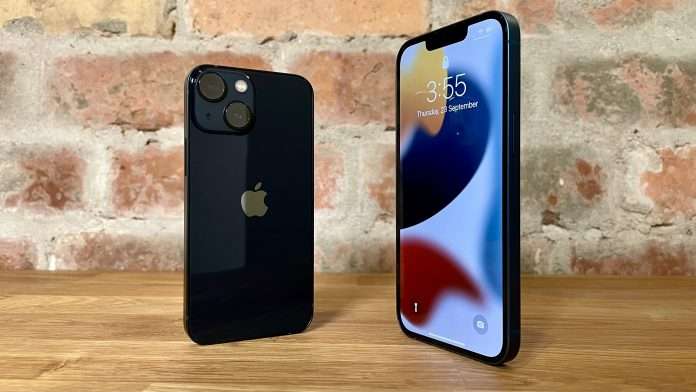 The iPhone 13 (and iPhone 13 mini) are the same phones with different screen and battery sizes. That’s it. In fact, the iPhone 13 is nearly-identical to the iPhone 12 too. The only differences are the much-improved camera(s), battery life and processor.

Whether that’s enough to make you want to upgrade will depend on your starting point. If you’re an iPhone 12 user, then the answer is “probably not”. If you’re on an iPhone 11, then the iPhone 13 starts to look a lot more convincing. Anything before that is almost unrecognisable – that’s how good this phone is.

Both the iPhone 13 and the iPhone 13 mini come in different configurations and the price varies accordingly. See the table below:

The 13th version of Apple’s iPhone doesn’t bring the same big design changes we saw with the iPhone 12. Nearly everything about it looks the same as the previous device. This isn’t a negative, the iPhone 13 and the mini look fantastic.

They have the same flat sides, the Ceramic Shield display, the glass back and the MagSafe compatibility. The only differences are the smaller notch on the display and the larger camera bump and even those aren’t dramatic differences.

The notch has been reduced by 20%, however, it’s still present at the top of the display (an easy design change to miss). The only way you’ll notice the difference is if you hold the iPhone 13 next to an iPhone 12 and study them both closely.

On the other hand, the camera bump is quite a bit larger and the camera lenses are now laid out diagonally as opposed to vertically. This is to make room for the much larger sensor in the Wide lens.

Both displays are sharp, bright and they work fine in direct sunlight. Apple has continued with it’s nice and thin bezels around the screen’s edge, and of course, the notch is still at the top but now a bit smaller (as discussed above).

Neither the iPhone 13 nor the mini received the 120Hz upgrade found in the Pro and Pro Max. They have a maximum refresh rate of 60Hz. Which is a bit disappointing.

The iPhone 13 and iPhone 13 mini utilise Apples’ new A15 Bionic processor. The A15 has 6 CPU cores, 4 being energy-efficient cores and 2 being high performance and 4 GPU cores.

Even though this version of the A15 chip has one less GPU core than the chip found in the iPhone 13 Pro and Pro Max, it’s hard to notice a definite drop in performance.

We found similar results when comparing the real-life performance of the iPhone 13 with the iPhone 12 and its A14 chip. I didn’t really notice the iPhone 13 being faster than the already-very fast iPhone 12.

If you don’t already have an iPhone 12, I expect you’ll notice the speeds of the iPhone 13 immediately. It’s super quick, stable and efficient.

Playing graphically demanding games, video editing and everything else with the phone was seamless. We never came across any slowdown or stuttering. It flies.

It’s also efficient. For all this power, the iPhone 13’s A15 Bionic processor doesn’t drain all the battery. And the battery life on both the iPhone 13 and the mini has improved significantly (more on this below).

The iPhone 13 and 13 mini use the same dual-camera array found on the iPhone 12 and 12 mini, albeit with some significant improvements mainly to the Wide lens.

The 12MP, f/1.6 wide lens is literally bigger than the one found on the iPhone 12. This means it can capture more light and more light means better results. The iPhone 13 takes fantastic photos in well-lit scenes but the Wide lens shines most with low-light photography. It also has Sensor-shift optical image stabilisation for taking great videos.

This is the same lens that was used in the iPhone 12 Pro Max and it’s brilliant. If it wasn’t for the camera array on the iPhone 13 Pro and Pro Max, we would be saying the iPhone 13′ and 13 mini’s cameras are the best on the market. You’re going to love it.

The second lens is the 12MP f/2.4, 120˚ Ultra Wide lens. This hasn’t been given a significant upgrade but it didn’t really need one. It works exactly as it should and takes great photos.

You can see that the iPhone 12’s Portrait mode creates a glow around the beautiful Hugo. Whereas the iPhone 13 doesn’t create that same effect and the final image looks sharper and more polished.

For standard photography like this picture it’s almost impossible to tell the difference between the iPhone 13 and the iPhone 12.

Again you can see the iPhone 13 produces a much more natural-looking image in low light when compared to the iPhone 12. The darks stay dark and the subject is suitably exposed.

Photographic Profiles change the look of the picture you’re taking. You’re able to create a profile that will set the tone and contrast of all the pictures you take to the same settings. This means you won’t have to go into every picture to make it look the same in editing.

Cleverly the iPhone 13 doesn’t simply alter everything in the picture, it uses computational information to decide what it sees and adjusts the photo accordingly. For example, it will recognise grass or faces and adjust the colours of your photos without changing what can stay natural (like human faces and skin tones). That means no more purple grass with filters.

If you’re someone who likes to edit their photos a lot, and you have a distinct photography style, I can see how this feature serves a purpose. But for the rest of us, I think it’ll be a feature we say “no thanks” to, and then forget all about it.

The more impressive new feature is Cinematic Mode. This is similar to portrait mode for photos except it works on videos. It will automatically blur the background while keeping a subject in focus. Cinematic Mode is also intelligent – if your subject turns his/her head away from the camera to look at something/someone the video will automatically adjust the focus to replicate “rack focus”.

The phone lets you switch between focus modes on the fly and the benefit is that it creates more cinematic-y shots.

Cinematic mode is also only available when filming in 1080p at 30fps (who films in that anymore?) and editing the focus with third-party software like Adobe’s Premiere Pro is not possible yet.

I also found that Cinematic mode struggled in low lighting and it would often get the focus wrong around certain elements like the subject’s hair.

Apple has marketed Cinematic mode as the ability to film as moviemakers do, but it wasn’t reliable enough. Like a kid with a new toy for the first few shots, it was a cool new feature I used all over the house, but after that, I never used it again.

Unfortunately, Cinematic Mode isn’t a polished product right now. It relies on AI to figure out what a subject is and what it needs to blur out, and from my goofing around, I noticed it struggling with blurred areas. This is something that Apple will likely finesse as the feature matures.

But, don’t let the weaknesses of Cinematic mode put you off the iPhone 13’s cameras. They’re unbelievably good. For day-to-day use like social media photos, sending videos to family members or even creating high-end content for YouTube, these cameras won’t just do the job, they’ll make your footage look amazing.

Both the iPhone 13 and the iPhone 13 mini have larger batteries than their iPhone 12 counterparts and this is their best new feature.

The 13 mini has a battery that’s 9% larger than the one found in the iPhone 12 mini and the iPhone 13’s battery is 15.1% larger. For the mini this correlates to about 1.5 hours extra life and the iPhone 13, lasts a massive 2.5 hours longer. It’s very impressive.

I was able to use the iPhone 13 all day without charging it once. It lasted from the time I got up, till the time I went to bed with normal usage. Stress testing the battery with constant 4K videos, gaming and video editing, it lasted a very respectable 8 hours.

It goes without saying, that a larger battery means more battery life and the iPhone 13 mini’s smaller size means the battery doesn’t meet the highs of the iPhone 13 Pro or even the standard iPhone 13. But this is to be expected.

If you’re planning on using the iPhone 13 mini like the Pro or the Pro Max, you’ve chosen the wrong model. This isn’t only for someone with small hands, it’s also for someone who doesn’t use their phone for intensive activities like gaming.

Of course, you can game and video edit with the iPhone 13 mini. But if you do, you should expect to charge the device a couple of times a day.

If you’re just scrolling social media and sending messages, the iPhone 13 mini’s battery life is probably big enough to serve you well. The extra 1.5 hours is a greatly appreciated improvement on the iPhone 12 mini, though.

Unfortunately neither the iPhone 13 nor the 13 mini support fast charging. Through a wired connection, the devices have a max charge set at a slow 20w and a wireless charge set at 15w.

This is painfully-slow when compared to other phones on the market like the Oppo Find X3 Pro which has a much faster 65w wired charging capability.

If these phones were compatible with faster chargers, the smaller battery wouldn’t be as much of an issue. Oh and remember, iPhones don’t ship with a charger in the box anymore. Which still sucks.

The iPhone 13 and 13 mini gets three important things right. Its camera(s), performance and battery life are all big improvements from its predecessor, the iPhone 12 and 12 mini. And that’s the ball game for Apple.

So while there isn’t anything new or exciting here, the upgrades the iPhone 13 does have represent a significant step forward for Apple’s most popular smartphones (and the mini).

And what all this means is pretty simple – anyone looking/needing to upgrade their phone in the next 12 months will find it hard to ignore all the things the iPhone 13 and 13 mini gets right.