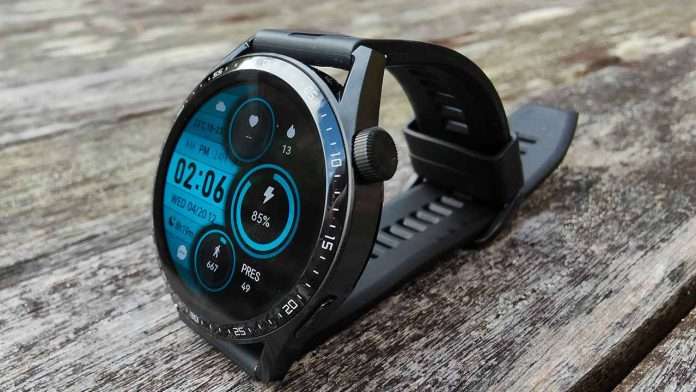 The Huawei Watch GT 3 is what I would call a hybrid smartwatch. On the surface, it looks like a more “smart” oriented watch that wouldn’t look out of place when going out for dinner. While  underneath, there’s a bevy of premium fitness/tracking features usually reserved for more “sports” oriented smartwatches.

It has a large AMOLED display that’s vibrant and responsive, it has a large array of health tracking features, supports over 100 sport-specific workouts, and has a massive battery.

For its price, it’s an impressive smartwatch. However, all of that is let down by Harmony OS, Huawei’s own operating system.

This isn’t an Android smartwatch. It resembles an Android smartwatch, however you can’t do everything you’d expect from one. It doesn’t have Google Play, Google Maps, or Gmail. And ever since the US banned American companies from selling technology to Huawei, other crucial third-party apps aren’t available either, like Spotify and Strava (a hugely popular running app).

It’s an issue here in New Zealand, and most of the western world, as Huawei smartphone sales have fallen off a cliff since the US ban. And while the watch did work with my Oppo device, the experience was fiddly.

This is competitively priced. As a comparison the 44mm Samsung Watch 4 costs $450 and the FitBit Versa 3 costs $340.

I liked the look of the GT 3. It doesn’t look like a sports-oriented smartwatch. It’s stylish and classic looking.

I much prefer rounded watches as opposed to more square looking ones and I’m a big fan of the GT 3’s rounded face with its 1.43-inch AMOLED display. It’s bright, vibrant and colourful with impact resistant glass over the top. It’s one of the better screens I’ve seen on a smartwatch.

On the side there’s a “rotating crown” that can be pressed to make selections or rotated for scrolling and zooming in. Below the crown is a singular button used to go back to previous menus.

The 46mm version of the watch felt large on my admittedly small wrist. The casing is 11mm thick and the 1.43-inch display is big. It wasn’t a problem though. I enjoyed being able to navigate the device easily with touch controls and not once did I find it obtrusive or annoying. I was expecting it to feel heavy however it weighs only 43g (without the strap) which is impressive for a smartwatch this size.

The GT 3 is compatible with a variety of different straps, all at different price points. There’s options for leather, metal, silicone and more. For our review device we had a silicone strap, it was fine.

The charger is a magnetic charger, similar to any smartwatch charger, nothing special about it.

The Huawei Watch GT 3 has a large amount of accurate fitness tracking features.

Location tracking is accurate and fast. We didn’t run into many areas where the watch couldn’t get our location even when testing it in areas where reception is poor like the Waitakere Ranges.

The watch doesn’t support ECG tracking though. If that’s something you require from your smartwatch, then the GT 3 isn’t for you.

The watch supports over 100 workouts for a variety of different sports. There’s skiing, open water swimming, cycling, skipping, and hiking just to name a few. As is usually the case with fitness-based smartwatches though, the GT 3 is at its best when running.

The tracking is accurate when running and the information provided to me once my workout had finished was helpful and easy to understand. I could see where I’d been, what my average cadence and speed was and I especially liked how it informed me how long I should rest before my next workout.

As someone that struggles to motivate myself to go for a run, the AI Running Coach was a welcome feature. This lets you set a goal in the Huawei Health app, and it will generate a personalised training plan based on characteristics like age, weight and height. This information is then synced with the calendar so you know when it’s time to go for a workout. It works seamlessly and it’s great for someone trying to achieve a running milestone.

I wouldn’t recommend it for a dedicated runner, the workouts didn’t reflect my speeds and ability very well, but for someone who’s trying to stay fit or get fit, it’s a nice option. Strangely though, you can’t set the date of your goal to over 4 months away which isn’t ideal for someone who has a more demanding objective like running a marathon.

You’re going to get the most out of the GT 3 when you pair it with a Huawei phone. This is a problem for the New Zealand market, as Huawei phones no longer support Android, they use Huawei’s own Harmony OS which while functional, has some significant limitations.

It looks and feels like Android but crucially it isn’t. Third-party app support is limited. There’s no native Spotify support, the alternative is to download music onto the watch in MP3, AAC, WAV, FLAC, M4A or OPUS formats. And the watch doesn’t support perhaps the biggest app for runners, Strava. For a watch dedicated to fitness and exercise, these are crucial apps that aren’t available. It also doesn’t support contactless payments.

In my time with the GT 3 I didn’t download a single app. As Google isn’t supported, they need to be downloaded from Huawei’s own AppGallery. Huawei has packed the watch and the store with its own native apps, but often there isn’t a good alternative to the apps I use everyday. Spotify being the most frustrating absence for me.

There are some workarounds to these issues, but they’re often niggly to navigate. A perfect example of this was on my Oppo phone I couldn’t download the Huawei Health app from the Google Play Store. After several hours trying to figure it out, I found an article stating I had to download Huawei’s AppGallery from a website, then download Huawei Health from there.

Huawei Health is the companion app that’s needed to use the GT 3 in full. I paired it with my Oppo phone and it was a bit clunky but it was easy enough to use and navigate.

Fitness data can be easily accessed and watch customisation is straightforward.

The 455 mAh battery is one of the GT 3’s best features. Huawei claims the 46mm watch boasts 14 days off a single charge.

In my three weeks with the device I didn’t have to charge it once. I found Huawei’s claims to be accurate. With that said though, because of the watch’s lack of third-party apps I wasn’t using it for much other than receiving notifications and checking the time. But even then, after 3 days of the screen coming on and off, and testing the tracking features, I had only used 5% of the battery.

This is massive. The best smartwatch on the market, the Apple Watch 7, has an 18-hour, 309 mAh battery life, that’s a long way off the 14 days of the GT 3. It’s the first smartwatch I’ve used where I could accurately track my sleep cycle every night because I didn’t need to charge it.

What made this more impressive is the screen. It’s bright and detailed and yet the battery still lasted this long. Other watches that boast large battery cycles, like some Garmin watches, don’t have colourful screens, instead opting for a black and white display. Not the case with the GT 3.

Ultimately I was left frustrated by the Huawei Watch GT 3. The design, display and fitness tracking features are some of the best I’ve used in a smartwatch. The AMOLED screen looks great and I like the rounded face.

The fitness tracking features are accurate and while they don’t quite meet the capabilities of the best Garmin watches, features like skin temperature tracking and all day SpO2 tracking are premium features not often found in smartwatches at this price.

The 14-day battery is the best battery I’ve come across in a smartwatch and all of this for a relatively low $450 price tag.

But even with all these features, I still wouldn’t use the Huawei GT 3 as my everyday smartwatch. While Harmony OS is fine functionally, the lack of Android apps like Google Maps, Google Play and even more important third party apps like Spotify and Strava make the GT 3 a bit pointless. I ended up only using it to check the time and read notifications.