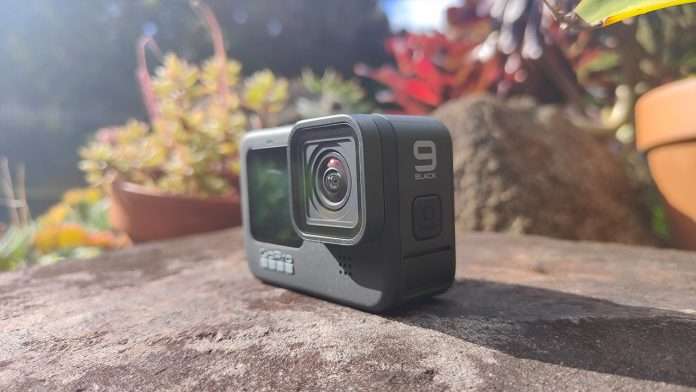 For a long time now, GoPro has been at the top of the action camera market.

Often it’s not competing with other action camera manufacturers, it’s really only competing with itself, trying to improve on last generations model.

The Hero 9 Black is another example of GoPro’s ability to make what was already good, even better.

The new front-facing camera, the easy to use Quik app and the ability to film in 5K not only makes the Hero 9 better than the Hero 8, it makes it the best action camera available.

Just be prepared to pay a lot for the device and its must-have accessories.

The GoPro Hero 9 Black is an expensive action camera costing $750.

There are also must-have accessories that add to the already high price. On its own, you aren’t going to be able to do much with the Hero 9 Black. Fortunately, there are several official GoPro accessories, but these aren’t cheap either.

If you’re thinking of buying a Hero 9 Black, expect to be paying a lot more for specialised accessories.

The Hero 9 Black is bigger, broader, and better than its predecessor. It’s taller and thicker than the Hero 8; however it’s just as easy to use.

This size allows it to have a larger touch screen measuring 2.3 inches diagonally, and this extra space makes it easier to navigate.

The Hero 9 still has the protruding prongs at the bottom for attaching to accessories like stabilisers and tripods. They’re the same size as the Hero 8, so you won’t need a special accessory for mounting the Hero 9. Great for those looking to upgrade to the next GoPro.

A lot of the Hero 9’s design is identical to previous GoPros. The start/stop button is on the top, the power/mode button is on the left, and the battery compartment can be opened on the right, where a USB-C port and a micro-SD slot are also housed. It’s a strong build, and the Hero 9 Black is incredibly robust.

With the Hero 9, GoPro has reintroduced the ability to remove the camera lens. You could do this with the Hero 7, but it was absent from the Hero 8. Although it’s hard to remove, it makes it easier to attach lens accessories like the Max Lens Mod, which is great. It also makes it easy to replace scratched lenses, which for an action camera is a necessity. But I put the Hero 9 through some tough tests, and I barely noticed a scratch or mark anywhere on the camera, so I didn’t have to do this.

The best addition to the Hero 9 Black is the front-facing screen. I found this was great when filming myself with a selfie stick, and it’s also handy for setting up shots. Of course, as per usual, you can see what your GoPro is filming via the app on your phone. However, this is quicker and more user-friendly. It’s a significant improvement. I loved it.

The Hero Black 9 boasts a large range of video modes, and the footage looks fantastic. It can film in 5K at 30fps, 4K at 60fps, and can get up to 240fps filming in 1080p resolution. It’s an impressive range of modes, and it’s easy to change between them.

I was impressed by the Hero 9 Black’s stabilisation. The Hero 9 introduces HyperSmooth 3.0, which is software designed to provide in-camera horizon levelling. It’s fantastic. You can select one of four modes.

Boost, which provides the most stabilisation with tight cropping of your footage. High, which is strong stabilisation with minimal cropping. On, which is the basic selection, and you can turn it off as well. This stabilisation can be used in any mode, and it’s impressive. Running with the GoPro provided incredibly stable footage.

I was blown away at how well the Hero 9 picks up audio. Running alongside my friend, the camera quickly picked up what she was saying and drowned out the footsteps and wind. It was like she had been mic’d up. It’s great.

The Hero 9 also introduces some new features like Hindsight mode, which will record the last 15 or 30 seconds of footage. And Duration Capture mode, which is a scheduled Timelapse feature. I don’t understand the purpose of Hindsight mode other than if you forgot to press record. I didn’t find myself using this as it also drains the battery. Duration Capture mode works exactly as you’d expect; it’s fine.

Taking still photos is good as well. The Hero 9 has a 20-megapixel camera, and I found photos looked great.

I was given a subscription to GoPro’s auto video editor Quik (replacing the GoPro app) with my review device. A subscription to Quik costs $2/month or $10/year, and there’s a free trial as well. GoPro subscribers will gain access to Quik with their subscription.

I liked Quik. It’s an easy-to-use app that allowed me to make cool montages of any of my footage in an instant. And even better you don’t have to be using footage captured by your GoPro to do this. Old videos I had captured on my phone months earlier were easily brought into the app, and it “quickly” turned it into an exciting montage for me.

I could easily change anything I didn’t like, and I could add features like slow-motion, tags/titles, and stickers. There’s also royalty-free music that can be added to your videos.

However, it doesn’t go much further than that. It’s not as powerful as other video editing apps out there like LumaFusion, and it’s not going to compete with computer-based video editors like Premiere Pro or Final Cut.

But with that said, Premiere Pro and Final Cut can be complicated tools to use, and a lot of learning needs to be involved. Quik has a small learning curve. Its main draw is in its name. It’s quick, it’s easy and anyone can use it. Perfect for “outdoorsy”, rather than “techy”, types

With the front-facing camera, the Hero 9 Black uses more battery than its predecessors. To combat this, GoPro has upgraded the battery in the Hero 9 to a 1,720mAh capacity compared to the 1,220mAh in the Hero 8.

This battery will get you through a day of footage and playback so long as you’re turning it off when you aren’t using it.

For heavy usage, two batteries will be required. The batteries are easy to replace however, to get a full charge from empty takes 3 hours. You’ll need to be prepared and make sure you’ve charged both batteries before a long day of filming.

Yes, the GoPro Hero 9 Black is expensive, add on top the must-have accessories and subscriptions, and it soon becomes a very costly purchase. But it’s the best action camera on the market.

It can film in stunning 5K, it’s easy to use, and it has the best video stabilisation out there.

Obviously, the Hero 9 Black is aimed at those who do extreme sports and want a robust camera that can keep up with them. But it works great as a normal camera as well.

The front-facing screen is a great addition that makes it easy to take selfies and set up shots of anything. And this alone makes it worthwhile upgrading from the Hero 8.

While the battery could be better, it’s easy to replace, and it will only become a problem with all-day use.

GoPro’s Hero 9 Black is a brilliant action camera, and even if you aren’t into action sports, you’re going to love it.