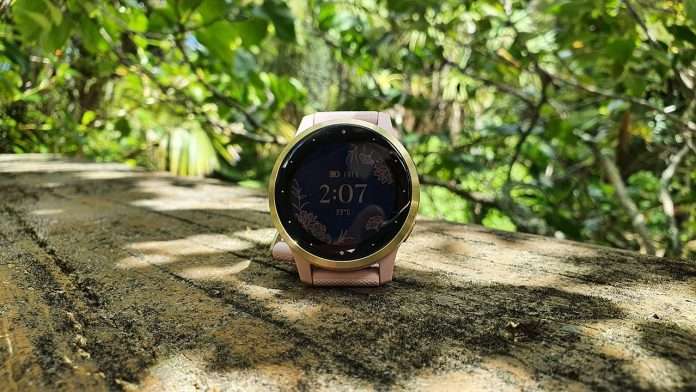 The Vivoactive 4s is a smartwatch that sits in a strange place in the market. It isn’t as fitness focussed or hardcore as Garmin’s Forerunner 945 and it isn’t as technologically advanced as the Apple Watch 6. It’s somewhere in the middle.

The Garmin Vivoactive 4s is a great smartwatch for anyone that wants the accurate health-tracking data that Garmin is known for, on a smartwatch with an impressive 7-day battery life.

It’s perfect for those who like outdoor activities however it lacks the more advanced smartwatch-y features that we have seen released by its competitors.

Before we get into the review, it is important to know that Garmin released two versions of the latest in the Vivoactive range, the Vivoactive 4 and the 4s. Basically, all you need to know is that the 4s is smaller than the 4 and they both cost the same price.

While not the flagship fitness smartwatch Garmin has to offer, the Vivoactive 4s is a premium, fitness-oriented smartwatch that is still on the more expensive side, costing NZD$649 (USD$300; £229)

I’ve always preferred a circular watch face over a square shape and the Vivoactive 4s has maintained the Vivoactive 3’s circular shape. It looks great. It’s comfortable and discreet, and I had no problems wearing the watch all day.

The Vivoactive 4s has two buttons on the right side of the screen. The top one acts as a shortcut to your workouts and also enables you to start and stop timers without relying on sweaty fingers while running. The bottom one acts as a back button and can also open up a quick access menu to watch faces, clocks and settings. I found the buttons were responsive and they made navigating the watch easy when outdoors. The Vivoactive 4s also has a responsive touch screen which is impressive for its small size.

There’s a reason for the low res screen

If you’re looking for a crystal clear, smooth screen on your smartwatch, then the Vivoactive 4 and 4s might not be for you. There is an upside, however, the low resolution allows for massive battery life, and I found it to be the best type of screen for outdoor activities.

The Vivoactive 4s’ low resolution means its always-on display has minimal effect on the battery. This is great when running because the screen always shows important information. There’s also a transflective screen that reflects light. This worked well, and I could easily see the screen when the watch was in direct sunlight. Perfect for when I was out on a sunny day.

This watch will get you active

The Vivoactive 4s isn’t as hardcore as other fitness-based Garmin watches like the Forerunner series. However, it is still one of the best fitness smartwatches on the market.

The watch comes preloaded with 20 different sports apps, like golf, swimming, kayaking and more. It works well, and it was effortless to select these apps and have the watch track my specified movements.

Running is where the Vivoactive 4s truly shines, though. The Garmin Connect app allows you to build your own workouts and download them onto the watch. Garmin also offers a free personal running coach, which I found was a great motivator to get up and go exercise.

The Vivoactive 4s also has the brilliant fitness tracking technology that we’ve come to expect from a Garmin smartwatch. After a run, the app shows a map of your route and highlights vital statistics like elevation, gain, heart rate and split time.

When you’re not working out, the Vivoactive 4s allows you to track several other important metrics: blood oxygen tracking, stress tracking, hydration tracking, women’s health tracking, sleep tracking, a heart rate tracker and more. Personally, I found the heart rate monitor the most useful along with the body battery energy tracking, which tracked my energy levels throughout the day alerting me when I should rest.

More a fitness watch than a smartwatch

The 4s allows is able to display smart notifications, but it isn’t a polished experience – lacking a typing interface or microphone dictation to reply to messages. You are able to read messages and emails on screen, but disappointingly you can only respond to messages with a preset selection of responses. And this is only available when paired to an Android device, Apple users aren’t able to reply to messages at all.

Offline music support is a thing too, compatible with Amazon Prime Music, Spotify and Deezer. Offering 3.5GB of space for offline music play.

You can also use Garmin Pay on the 4s. But it’s pretty limited here in New Zealand. There are only a handful of payment options that support Garmin pay: ASB Bank, Farmers Mastercard, Flight Centre Mastercard, Latitude Financial Services and Q Mastercard by FlexiGroup NZ. Clearly, Garmin doesn’t enjoy the same influence brands as Apple and Google do.

The battery life of the Vivoactive 4s is super impressive. Garmin claims that in smartwatch mode, the Vivoactive 4s can last up to 7 days without requiring a charge, and up to 5 hours with GPS mode turned on with music. We found this accurate. The Vivoactive 4s also charges very quickly. A full charge only takes around an hour too.

The Vivoactive 4s is designed to look less like a bulky specialist-fitness watch, and more like an everyday smartwatch. It has a massive battery life (due to the low resolution, sun reflective screen) and it comes packed with a wide range of fitness workouts and outdoor activities.

Its traditional smartwatch-y features are a bit off the pace compared to other high-end smartwatches – however, being a Garmin, it comes with one of the best fitness apps on the market, Garmin Connect. Meaning you get access to the fantastic health trackers that Garmin smartwatches are known for.

Ultimately, the Vivoactive 4s is a good choice for anyone that’s interested in keeping fit, and wants to be able to monitor their progress without the need to charge their watch every day. If that sounds like you, the Garmin Vivoactive 4s is a decent, well-priced smartwatch that will serve you well.