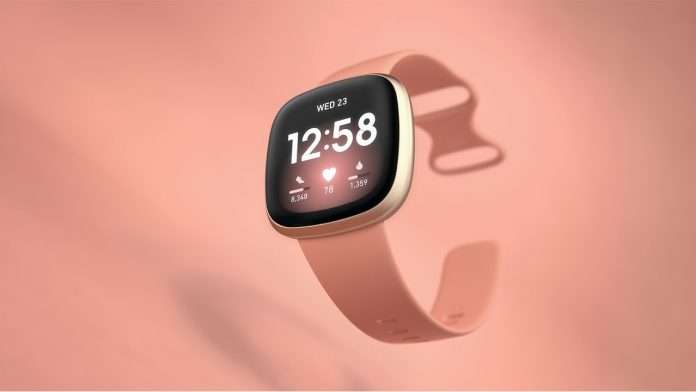 For a mid-range watch, cheaper than its competitors, the Versa 3 is trying to focus on fitness and health to attract buyers. And to a certain extent, it does that. However, a sometimes-clumsy navigation system and the fact that its fitness and health features don’t offer anything more than the competition, make the Versa 3 a difficult recommend. Especially as there are several rival mid-range watches that do the same thing and cost less, like the Samsung Galaxy Watch Active and the Gear Fit 2 Pro.

My biggest frustration with the Fitbit Versa 3 comes down to two main factors. The lack of internal storage and the removal of a physical button hold the Versa 3 back. If it has these two features, I think it would be an excellent mid-range smartwatch.

The Fitbit Versa 3 is no longer the flagship smartwatch from Fitbit. Instead, the Versa 3 has fallen to the middle spot, giving way to Fitbit’s new #1 watch, the Fitbit Sense.

When it comes to the shape of a smartwatch, it all comes down to personal preference. I prefer a cylindrical screen, and I found the square style of the Versa 3 to be chunky and weighty as it took up almost all of my wrist. I found this uncomfortable, especially when running, because I could always feel the watch’s presence. I never forgot that I had the Versa 3 on because it felt big on my arm. These are issues that I didn’t find with the Apple Watch SE or the Samsung Galaxy Watch Active.

The dimensions of the Versa 3 are 40.48mm x 40.48mm x 12.35mm. Although this isn’t a drastic difference to the Apple Watch SE, which is 44mm x 38mm x 10.4 mm. It was noticeable and uncomfortable on my arm. In all fairness, this could be because I have skinny wrists, but as I mentioned, I didn’t have this when wearing other smartwatches.

The square size of the watch allows for a large display at 1.58 inches or 4.01cm. And the Versa 3 comes with a 40mm AMOLED screen with a 336×336 resolution. This is very good when compared to other midrange smartwatches. The Garmin Vivoactive 4 has a screen with 260×260 pixel resolution. The Versa 3 is almost $200 cheaper than the Vivoactive 4, and yet it has a better resolution screen which is a significant positive.

The large screen allows for easy touch control navigation; however, Fitbits’ decision to replace the physical button on the Versa 2 with an indent on the Versa 3, made using the watch tedious. The Versa 3 has removed the side button of its predecessor and changed it to a touch sensor indent on the watch’s left side.

This indent is a terrible new addition to the Versa 3. Very rarely could I get the button to work. It’s inconsistent and becomes very frustrating as navigating the Versa 3 becomes a chore. Trying to back out of an app that I may have accidentally pressed or had finished using, is difficult, making for an annoying experience.

The strap on the Versa 3 is sporty in its aesthetic and is comfortable without being irritating. Its design allows for a secure fit and the ability to remove the strap by simply pressing a button, allows for easy customisation and interchanging of straps. There are many different types of straps with various materials such as leather, silicone and metal. Allowing for a large amount of customisation. Straps vary in price based on the material, but they generally cost around NZ$35 (US$35; £30)

The Versa 3 comes with a dock style charger. Fitbit has replaced the USB charger that came with the Versa 2 with this new  easy-to-use dock that can charge the Versa 3 quickly. Fifteen minutes on the charger can boost the battery by 40%.

The Versa 3 is also water-resistant up to 50m. This means that it can be comfortably used when going for a swim or a shower.

A key component of fitness and activity-based watches is music. Being able to listen to Spotify or different music streaming services, separate from your phone, is a must for smartwatches today and strangely, the Versa 3 does not allow this. There isn’t any internal storage for the Versa 3. Which means it’s impossible to download songs or Spotify playlists to the watch. Forcing users to carry their phones if they want to listen to music while working out with the Versa 3, this is a big issue. Especially as cheaper smartwatches have this feature included. It’s hard to understate how annoying I find this in a smartwatch that’s designed primarily for fitness.

With a recent update, the Versa 3 is now compatible with Google Assistant. In fact, you can use Alexa or Google Assistant as your voice assistant. This is a great feature for those who are already invested in a smart device ecosystem in their home.

The watch has a built-in microphone and speaker on the right side. This allows for the ability to make and take calls on your watch. It works really well; however, the Versa 3 does not come with an LTE version, so to use this function, you need to be within Bluetooth range of your phone. This makes the feature a bit redundant as it’s microphone and speaker, although they sound great, are not at the same standard as phones. You’re better off just talking on your phone (providing it’s not in your pocket or tucked away in a bag). This feature acts more as a notification that someone is calling instead of a substitute for your device.

There are a large number of apps on the Fitbit app store. Once I figured out where to get these apps, the process was painless, and the apps downloaded easily. Unfortunately, some of the best apps are hidden behind Fitbit Premium, a subscription service costing NZ$16.99 (US$9.99; £7.99) a month.

With Fitbit premium, you gain access to better Health Metrics, 150+ video workouts, 45+ mindfulness sessions, personalised insights, sleep scores and a few more features. There’s a lot here, and there’s also a 90-day trial to see if it will work for you.

The health trackers are premium quality and are worth the money; however, the quality of the workouts and mindfulness sessions that make up most of the subscription aren’t a lot better than other mediums. You can find exercises and sleep classes for free that are of the same quality, and sometimes higher quality, than what’s on the Fitbit store.

Where the Versa 3 is best is with its fitness and health trackers. The step and heart rate trackers are some of the most accurate I’ve used in a smartwatch. In a recent update, Fitbit announced the SpO2 Oxygen Saturation watch face that tracks oxygen saturation while you are sleeping. This tracker is great; however, access to your Oxygen Saturation trends is locked behind a Fitbit Premium subscription which is frustrating for those who don’t want Fitbit Premium.

The Versa 3 is also the first of the Versa line to have an internal GPS. Although this isn’t something new or groundbreaking, the GPS is a welcome addition to the Versa 3. It allows real-time mapping of a variety of outdoor activities. It is a bit of a shame that the Smartrack feature, recognising 15 minutes of prolonged exercise, isn’t synced with the GPS. Meaning it won’t automatically turn on GPS tracking. This can be frustrating when you have been for a run and forgot to turn on the GPS. For GPS tracking to work, you need to select the activity manually and go from there.

When you do remember to turn it on, it can take a while to locate but the GPS works well once it’s locked. Maps and information are available on the Fitbit app almost immediately after your activity has ended. It provides a decent amount of very accurate information such as distance, heart rate, pace, steps, calories burned and more. Which is handy for fitness and health obsessives.

The Versa 3 aims to target active and body-conscious users, or at least, people trying to become that way. There are new breathing exercises included in the Versa 3 that are easy to follow and are a great way to take a break from a busy workday. You can set up activity reminders, fitness goals, and you can also monitor sleep patterns. The Versa 3 is always tracking what you do, and the information it provides is informative and often very helpful. If you are looking for more in-depth statistics and data about your health, you can purchase Fitbit Premium which adds health metrics such as breathing rate, oxygen saturation and changes in heart rate.

All of the tracking data is easily accessible on the Fitbit app, and it’s provided in a way that is very easy to understand. The Versa 3 is a great way to monitor health and activity, and it does a good job at keeping you driven by setting goals and with Fitbit Premium, providing a personalised coach.

The battery for the Versa 3 is very impressive. It lasts a long time and can charge quickly thanks to the new charging dock. On a full charge, you can get six days of battery out of the Versa 3. This can be affected by other factors such as GPS and always-on display, but it is still impressive.

With the GPS on, the battery was being used at around 10% every 30 minutes. Having the display in always-on mode can get about two days use on a full charge, and if accompanied with the GPS, you will need to charge the watch every day.

These battery eaters aren’t an issue due to the speed at which you can recharge the watch. With the dock, you can expect to get around 40% battery on a 15-minute charge. It’s impressive and negates any worries you may have with the battery running out.

The Versa 3 is a mid-range smartwatch that’s cheaper than its competitors, but lacks some key features that are a must for smartwatches at this price.

It has accurate health trackers and can provide a lot of health and fitness information for free, and you can get even more if you purchase Fitbit premium.

The battery is excellent, and you are getting a more high-end AMOLED screen for a lower price than some competitors. However, with the Versa 3, the good does not outweigh the average.

The Versa 3 is hard to navigate with its indent touch sensor. It’s chunky and uncomfortable. It doesn’t allow for internal storage, meaning if you want to run with music, you have to take your phone with you and it’s not well optimised for iOS users.

If you’re looking for a smartwatch primarily for fitness and health, then the Versa 3 is a good, cheaper option. And although its trackers are accurate, the watch as a whole isn’t too much better than what other smartwatches are capable of, and it’s missing essential functions that these other competitors have.