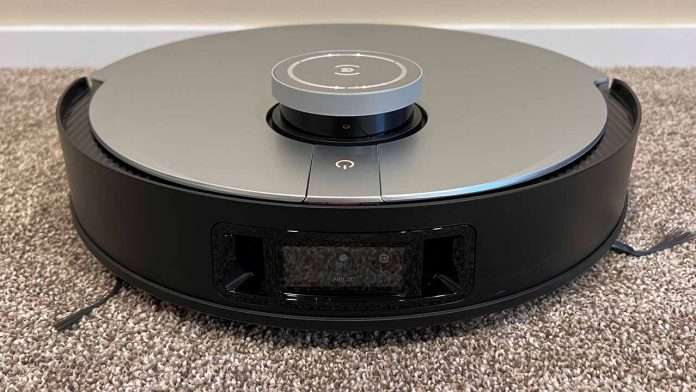 If you’re looking for a device with all the latest robot vacuum technology, then this is it. Be warned though, it comes with a very high price-tag. At $2,999 the X1 OMNI is expensive.

Yes, the Ecovacs’ Deebot X1 OMNI is a better vacuum cleaner than its predecessor – the Deebot T9+. Comparing the most basic metric, suction power, its improved 5,000pa suction is significantly more powerful – 230% more powerful to be exact – which means it can give your house a deeper clean. But there is more than just raw power on offer here. There’s a new auto-fill, and auto-clean mopping, function that works pretty well – though it still requires users to manually attach and remove the mopping pads when they wish to use this function (instead of the vacuum).

There’s also a bumper-sized dock which auto-empties the bin. Simply put, the X1 OMNI is Ecovacs’ most autonomous robot vacuum yet.

And while some of these features like the AIVI 3D advanced object detection, TrueMapping 2.0 and the 4-stage deep cleaning system work well and are impressive, some new features felt unnecessary.

For example the X1 OMNI comes with an onboard camera, and a voice assistant named Yiko. On the surface these look like solid additions, however, in practice they’re expensive components that you’re probably not going to use.

If you already have an Ecovacs robot vacuum the X1 OMNI isn’t worth upgrading for, and if you don’t need the latest technology with your robot vacuum, you’ll get similar results from the Deebot T9+ which is almost $2,000 cheaper.

Crucially, the X1 OMNI is a good vacuum cleaner. Boasting 5000pa suction power, there isn’t much this vacuum can’t pick up. It’s 230% more powerful than its predecessor the Deebot T9+.

Underneath the device there’s two dual-side brushes and a floating main brush. The side brushes ensure that dust and dirt that the robot doesn’t drive over the top of gets picked up and the floating main brush is effective at picking up everything else. You’ll definitely be able to notice when the vacuum has cleaned your carpet. It’s also well equipped to clean hardwood floors.

The X1 OMNI has a mopping function that’s effective. The dual mops rotate at 180RPM (rotations per minute) so the floor gets a good deep clean as the robot travels around your house.

Annoyingly, in order to put the robot into mopping mode, you need to physically attach the mops to the device. I couldn’t tell the robot to mop the floor without having to go to the device, find the mopping pads and attach them. While it wasn’t a major issue, it took away from the autonomy of the vacuum, especially if I was using the voice assistant to clean up a mess or I was away from home (more on that below).

The surface detection technology in which the OMNI recognises the surface and adjusts the suction power to suit, worked well. When the robot drove from a dense carpet to a hardwood floor, you could hear the difference in power. In a room with mixed floor types, it’s very useful and in my house both the wood and the carpet came out looking clean.

Ecovacs have included AIVI 3D which is a new advanced object detection technology with the X1 OMNI and it works well. The robot is able to identify objects and move around them without issue. While it still picked up the occasional phone charging lead or shoelace, the majority of the time I didn’t have any problems with the vacuum running into walls or objects. It also has edge detection so it won’t drive off stairs which is good for multi-story houses.

The dock is massive, it’s like a big bin. The Jacob Jensen design is nice but I struggled to find somewhere where I could tuck it away.

The reason the dock is so big is because the X1 OMNI not only empties itself after vacuuming, it also cleans the mops after use. To do that, the bin has two 4L containers inside, one for clean water, one for dirty water. These have to be emptied and refilled, but I was fine with that, the 4L bins are large enough that I only had to change them once a week.

The mop cleaning feature is new to the X1 OMNI and I found it added to the robot’s autonomy. I no longer had to worry about taking off dirty mop pads and putting new clean ones on. And similar to its predecessors I would only have to empty the vacuum bin once a month. It’s great.

The one problem I did have with the dock is its loud. Very loud. When the dock sucks the dust and dirt out of the robot, it sounds like an airplane taking off. It’s easily loud enough to wake you up if you’re sleeping in a neighboring room – which is an obvious flaw if you want to run your robot vacuum during the night.

The Ecovacs app is as good as ever. It’s easy to use, and customisable.

In the beginning it goes through an initial setup where it creates a map of the house. The robot creates a 2D or a 3D map of the objects, walls and rooms, and you can see these in the app. While the 3D mapping technology looked cool, I didn’t have much use for it and stuck with the 2D one.

From here you can customise the house exactly how you want it. You can name rooms, you can change the sequence in which the vacuum cleans, you can adjust room boundaries in case the robot gets it wrong in the setup stage, you can set a cleaning schedule and a lot more.

The process was seamless and I was easily able to set up the X1 OMNI exactly how I wanted it. It would vacuum every morning at 7am, starting with my kitchen and ending with my living room. Once that was setup, I never looked at it again. The reason you buy a robot vacuum is because you don’t want to worry about vacuuming, and the Ecovacs app allows that.

The two main new features introduced with the X1 OMNI are the onboard camera system and the voice assistant integration.

The X1 OMNI is compatible with Siri and Alexa however the list of commands you can tell it is limited compared to Ecovacs’ new in-house voice assistant Yiko. Yiko can understand and follow a massive amount of commands such as “come here,” “clean the kitchen,” “empty your dustbin,” and more. However, using the voice assistant was a bit hit and miss. Yiko often mistook my conversations with others as talking to it, which would start up the voice assistant dialogue, and the speaker on the vacuum is terrible, so it can be hard to make out what Yiko is saying.

I also didn’t have much reason to use the voice assistant. To engage Yiko I would have to go close to the vacuum. The problem with this is because the dock is so big, I had to tuck it out of the way. If there was a spill and I wanted to voice command the OMNI, I would have to walk all the way to where the dock was located. It was much easier just getting my phone out and commanding it that way.

The only time I was tempted to use the voice assistant was when the vacuum was already cleaning, and since it was already doing its thing I didn’t bother.

I don’t fully understand why the X1 OMNI has an onboard camera system. I only used this once, and that was when I was testing it. Ecovacs claims it can act as an in-house security system but it’s not compatible with Arlo or Google Home devices so it’s another security app I would have to install on my phone. With that said, the camera quality is very impressive. It’s crisp and clear – but in my mind, all it’s really doing is bumping up the price.

The camera also poses some privacy concerns. I’m not very comfortable allowing a company to store videos and photos of every room of my house. If you look at the Smart Home Data Privacy regulations set out by Ecovacs, using the camera allows the company to do this. It doesn’t seem right. The thought of having a camera that can literally wheel itself to any room of my house (any time it wants) is also a little creepy.

In regards to cleaning, Ecovac’s Deebot X1 OMNI is the company’s best robot vacuum yet. The 5,000pa suction power and the 180RPM mopping functions work well and they leave the house with a deep clean.

It’s a very expensive robot vacuum, though, and that poses a problem. Some of the new features that Ecovacs have introduced are genuinely helpful (like the automatic mop cleaning). However, the big ticket features like the onboard camera system and the voice assistant integration aren’t features I used regularly, if at all.

Which makes me question whether the $3,000 asking price for these new features are worth it. The features I used most (minus the 230% improved suction power) are all available on the X1 OMNI’s predecessor, the T9+, which is significantly cheaper at $1,299.