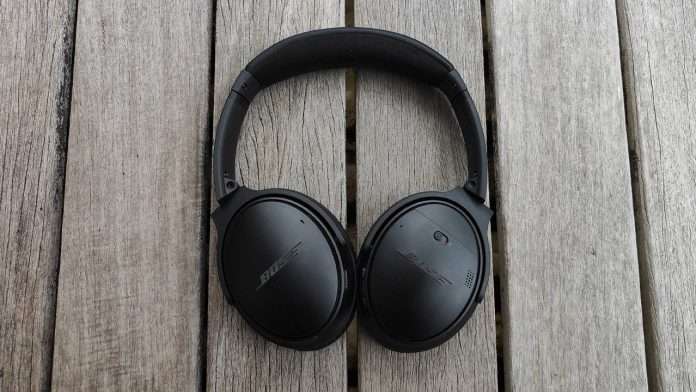 While they lack premium features, we’re now used to with premium headphones like touch controls, on-ear detection and advanced codec support. The QuietComfort 35 II’s hold their own. They generate a good sound, they’re comfortable, have Bose’s proprietary, market-leading active noise cancellation (ANC) technology, and have responsive buttons to control your music.

They do everything you need in a new pair of wireless headphones, and they do it pretty well. However, there are superior headphones on the market for the same price, Sony’s WH-1000XM4’s.

While they’re significantly cheaper than their successor, the similarity in the price between the QuietComfort 35 II’s and the Sony WH-1000XM4’s makes these headphones hard to recommend. Sony’s headphones are a superior product in almost every way. It’s a testament to how well the WH-1000XM4’s are priced.

The QuietComfort 35 Wireless Headphones Series II look very similar to the previous generation Bose headphones. The only change is the action button on the left earcup dedicated to voice assistants and turning ANC on/off.

Bose headphones have been well designed for several years, and there was no need to change the formula dramatically. The QuietComfort 35 Series II’s are comfortable, light and sturdy.

When compared to other more premium headphones like the Apple AirPods Max, the plastic material of the QuietComfort 35 Series II’s starts to feel cheap. I was never worried about damaging them, though. I also appreciated how flexible the Bose headphones were. I was easily able to bend and twist the headphones to fit into my bag, for example.

The familiar Bose slim profile is present here, and the headphones are as comfortable as ever. They have very little clamp force, and I could wear the QuietComfort 35 Series II’s for several hours without them becoming uncomfortable.

Although the headphones are missing touch controls, they do have buttons that allow you to do everything you need when listening to music and I appreciated how easy it was to turn up the volume, pause my music, change songs and turn ANC on/off. I didn’t miss touch controls.

Headphones are only as good as the sound they produce, and the QuietComfort 35 Series II headphones could be better.

It’s obvious that Bose prioritised bass quality with these headphones. Listening to bass-heavy songs like Legend Has It by Run the Jewels or Invaders Must die by The Prodigy had mixed results. I found the headphones’ dynamic range was limited and it created a dull overall sound that sounded slightly muddy. This is due to the average-sized sound stage that the headphones make. The bass and vocals come through clearly however, the mids and highs sound like they’re all coming from the same point in space, and it’s hard to differentiate them in the mix. With that said, I have had the luxury of testing other more premium headphones. The Bose QuietComfort 35 Series II headphones still create a great sound that a layperson will love. However, audiophiles will be more satisfied with the Sony WH-1000XM4’s.

Bose’s proprietary ANC technology is here, and it works just as well as ever. Bose is the market leader for noise cancellation, and the results are tremendous. I like to test the ANC capabilities of headphones by playing the drums with them on. I could barely hear my drums when wearing the QuietComfort 35 Series II headphones, which was impressive. Turning ANC on and off was drastically different, and I was impressed by how much sound the headphones could cancel out. Even loud snare hits were quiet; it was great.

Unfortunately, the QuietComfort 35 Series II headphones don’t have an equaliser on the Bose Connect app. This is a missed opportunity as it would allow you to get the sound exactly how you want it, and it may have helped with the sometimes muddy sound.

The only difference in features between the QuietComfort 35 Series II and the original QuietComfort 35’s is the voice assistant integration. Using the dedicated button on the left earcup, you can summon Alexa or Google Assistant. I liked this feature. It worked well, and I noticed it was significantly quicker than when I used Google Assistant on my phone. The headphones were able to pick up exactly what I said, and I never had issues that required me to repeat myself. Unfortunately for Siri users, there isn’t support for Siri however, Google Assistant on iOS devices will work.

The Bose app is one of the best sound apps on the market. It’s simple to use, intuitive and has a lot of features and customizability. Pairing the QuietComfort 35 Series II with my phone was easy, and changing the functions of what certain buttons did was just as simple. When I turned the headphones on, they seamlessly connected with my phone and were ready to use instantly, it’s great.

The headphones were okay when talking on the phone. As is common with headphones, they pick up a lot of outside noise. Talking with them in the wind simply doesn’t work, though. My partner could barely hear me, and I had to take them off.

The self voice feature that I could turn on in the Bose Connect app was great. This allowed me to hear my own voice when talking on the phone which created a more natural feeling, and it worked well.

There’s also a music share feature that allows you to stream your music to two devices. I never really used this feature, but I can imagine it coming in handy on long trips, maybe when stuck in an airport and you and your friend want to watch the same video. It’s a nice feature to have however it does require two Bose headphones to work. Connecting to another pair of headphones is simple and it only takes a few seconds for them to connect.

The QuietComfort 35 Series II last 20 hours with ANC turned on.While this isn’t quite as good as the Sony WH-1000XM4’s 30 hours, it’s standard in the industry. 20 hours is plenty, and you’ll never worry about needing to find a place to charge the headphones on short notice.

I particularly liked that there’s a wired mode that works with ANC if you do run out of battery. Strangely Bose went with a 2.5mm to 3.5mm cable, which is a nuisance as replacements are harder to find, but the wired mode works well.

Bose’s QuietComfort 35 Wireless Headphones Series II are good wireless headphones. They do everything you need them to, they have great ANC, produce a good sound, have a 20-hour battery life, and they’re comfortable.

These are older headphones, and it’s harsh to expect premium features like touch controls, on-ear detection and compatibility with advanced codecs that we see with premium headphones today.