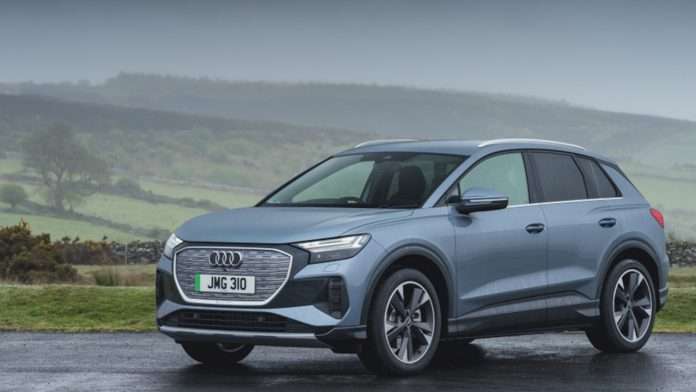 You’re looking at the Q4 e-Tron Sportback, the third fully-electric car from Audi – and probably the most important yet. Packed full of tech, it rolls on the Volkswagen Group’s MEB chassis, a bespoke platform specifically developed to make several bespoke EVs.

Electric, compact and SUV-shaped, the Audi Q4 e-Tron ticks all the boxes on paper and should be a refined rival to the likes of Tesla and Polestar. But is it any good, or just an EV by the numbers? Read our review to find out.

Audi’s third EV is a smart-looking crossover, and follows the larger original e-Tron SUV and the sporty Coupe-shaped e-Tron GT. It may not look as interesting or go as fast, but Audi believes it’ll be one of its best-selling cars as early as next year. It’s available in Sportback and SUV versions, with three powertrains available.

On the outside, the Q4 e-Tron looks like every other Audi in 2021; it’s aggressive, muscular and features a ‘singleframe’ grille at the front, only here it’s merely there for show. EVs require far less cooling than old-fashioned diesel or petrol engines.

As you’d expect, the e-Tron also shares a likeness to its e-Tron siblings, and in practice its complex details and sharp lines translate well to the compact crossover silhouette. Of course, the Sportback is the sleekest looking of the two body styles available – though Audi believes only one-in-five will choose it over the SUV.

You’ll find the Q4 e-Tron’s first trick upon jumping in; it feels bigger on the inside. Electric powertrains tend to take up less space than conventional ones, and a lack of transmission tunnel means the Q4 offers the interior space of a car with a much larger footprint.

Roominess aside, you’ll find the Q4 e-Tron’s interior holds an impressive amount of technology. Most functions are controlled via a 10.1-inch touchscreen, but Audi has shifted several to capacitive, haptic controls on the wheel. In practice they work better than you’d expect, though they can be fiddly. At least the A/C uses real buttons…

The Q4 also features some firsts; delve into the settings enough, and you’ll find customizable day running light signatures. There are four choices on offer, and they mean you can ‘slightly’ change the look of your Q4 should you wish.

The Q4 also features an ingenious head-up display. In addition to beaming useful stats such as speed and navigation to your eye line, the upgraded HUD Audi also adds a layer of augmented reality. Neon arrows fly across the road to turns you need to take, and when in adaptive cruise you’ll also see the Q4’s systems calculating the distance to the car in front.

It drives, erm, like an Audi. Which can only be a good thing for its prospective owners. Steering is easy and progressive without being too numb, and the Q4 is more dynamic than you’d expect. When pushed, the Q4 doesn’t immediately surrender to body roll and it even keeps its composure when nailing the throttle out of roundabouts

It doesn’t drive like an e-Tron GT by any means, but it doesn’t behave like a lumbering, top-heavy SUV either. And despite weighing around two tonnes, the Q4 can still contend with potholes and less than ideal road surfaces.

We drove a Q4 with the 204PS 40 powertrain, which takes 8.5 seconds to get to 100kmh, has a top speed of 159km and a range of 509 kilometres. And while that sounds a touch sluggish on paper, like most EVs, it’s more than quick enough to 30mph for most situations.

The Audi gives you a small gear selector to switch between Park, Reverse and Drive – but there’s also a B mode which targets increased regen. When selected, it makes the car work harder to convert kinetic energy back to electric energy. The effect is like driving with the handbrake on – but only when you’re coasting.

More expensive trims also offer paddles to allow the driver to select the desired level of regen. It’s a feature that won’t be used by many, but could act as a thrifty and useful ‘pre-brake’ if you put some time into mastering it.

Audi will reveal prices for the New Zealand market closer to launch, and that’s expected to be in just over a year’s time. “We are working hard to land it in New Zealand,’ said Dean Sheed, General Manager, Audi New Zealand. ‘However it is likely that international demand for such a vehicle will not see it land here until the end of 2022 at the earliest.’

The Audi Q4 e-Tron might not be the most exciting EV on the outside – but it’s a clear sign of things to come. Designed from the ground-up to be an EV, it achieves a level of refinement that’s still rare when it comes to electric cars. Roomy, practical, full of tech and just about fast enough – it’s no wonder Audi thinks it’ll sell like hotcakes.