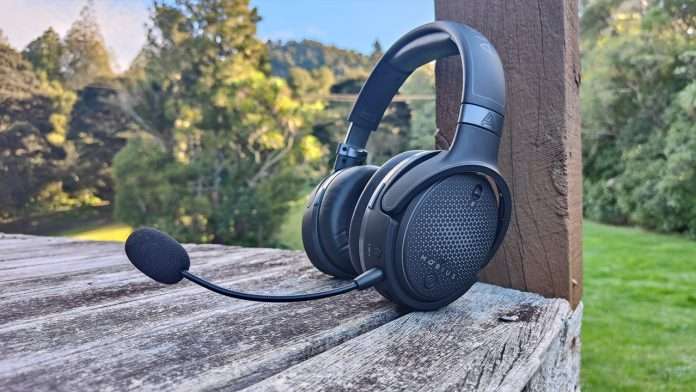 Audeze’s gaming headset, the Mobius, is a high-end headset that doesn’t hold back. It can do it all. Delivering clear, balanced sound through its Planar Magnetic Drivers and “3D surround sound” through something called Waves NX technology (more on this below).

It’s a versatile headset you can use wirelessly and wired.

Don’t mistake the Mobius for a gaming-only headset, though. The sound quality offered by the Mobius is comparable to high-end headphones from the likes of Sony, Bose and Apple. But gaming, with 7.1 surround sound is where the product excels, creating an incredibly immersive experience.

The Mobius is an expensive headset costing $750.

To put this into perspective, the Razer Blackshark V2 is an excellent gaming headset that only costs $180.

The Audeze Mobius looks like a normal headset. There’s no flashing LED lights or vibrant colours here. Our review unit had the “Team Carbon” colour scheme, which is simply a black pair of headphones.

The design is subtle and elegant, which is rare for gaming headphones. It means they can also be used when commuting, or at work, too.

The Mobius is a premium headset, and it’s built with premium materials. This makes it pretty heavy. However, the headband and earcups are padded with memory foam which helps manage that weight. At first, the Mobius felt tight, but as the memory foam familiarised itself with my head, it ended up being a comfortable fit.

On the left earcup, you can find a range of controls. It’s a bit of a cluttered mess that takes some getting used to. There’s a dial for volume, a dial for microphone volume, a 3D audio button, a mic off switch and a power button.

To add to the confusion, these controls all have secondary and even, in some cases, tertiary controls. For example, you can skip a song by clicking the volume control dial once, you can go to the previous song by holding then scrolling the dial, and you can link back to the last Bluetooth host with a double click. It’s a lot to remember; however, I would much rather have those controls available than not at all.

Also, whenever you use a control, a voice (Audeze calls the “Gypsy Muse”) plays in the headset that tells you what you’ve just done. This is helpful, and it prevents mistakes.

The Mobius has a USB-C port for charging and a wired connection. The headset comes with a USB-C to USB- C and a USB-C to USB-A cable so you can connect it to any device.

You can also use it wirelessly via Bluetooth. However, it needs to be wired to use 7.1 and 5.1 surround sound.

The Mobius has a balanced sound that doesn’t have overbearing and invasive bass, often found with gaming-specific headphones. Listening to bass-heavy hip-hop tracks by The Four Owls was a great experience. I could easily hear each musical element in the mids and highs, and more intricate tracks like Honeybody by Kishi Bashi sounded deep and concise. It’s great.

This balanced sound lends itself well to gaming as well. Playing games in 7.1 surround sound with gaming headphones, can often result in massive increases in bass, which distorts the overall sound. The Mobius doesn’t have that problem. The bass isn’t invasive, and the clear audio is the best I’ve heard with surround sound gaming.

The Mobius also works well with games with subtler audio, like RPGs. The balanced sound allowed me to hear the subtleties of the dialogue in Mass Effect: Legendary Edition, and environmental sounds came through clearly. It’s immersive, precisely what you want from a gaming headset.

Audeze’s Mobius has 3D surround sound with head tracking, powered by Waves NX technology. It works well when listening to music, but it’s a bit pointless for gaming unless you have an ultrawide gaming monitor where you’ll be moving your head. It works using directional cues. With one press of the 3D button, you can set where the audio is coming from (usually looking straight at your monitor). If you turn your head, the audio will adapt to your head position. If I turn my head left, the audio will play through my right earcup and so on. It works well and is easy to set up; however, I very rarely turn my head when I’m playing a game. I’m generally looking straight at my monitor, so I never really had a use for this feature. I was more than happy with the way the Mobius performed in 7.1 surround sound.

Audeze HQ software allows you to change your head circumference and height when setting up 3D audio; however, I never needed this. You can also control your headphones from this interface if you don’t want to use the controls on the left earcup.

Disappointingly the software doesn’t include a customisable EQ, to boost bass or treble and set it to how I wanted. It does have eight sound profiles you can choose between, like ballistics, RPG, racing, and flat. However, there isn’t much difference between these features.

Yes, the Mobius is an expensive headset, but it’s worth every dollar.

This is a hybrid headset designed for all-day use. It’s versatile, compatible with wired and wireless usage, and most importantly, it makes games sound incredible.

Overall, Audeze’s Mobius is a headset for those who want the very best audio when gaming. And as a bonus, it works as a headset away from your PC (or console) as well. It’s worth the investment.