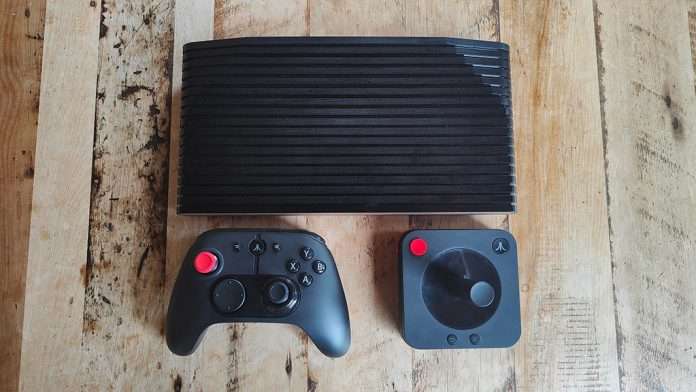 The Atari VCS is a homage to the Atari 2600 which came out in 1977. It’s a gaming console designed for playing retro games, but it struggles to even do that.

The VCS leaves me with more questions than answers, like: “who is this console for?”, “why is it so expensive?”, and “why does it even exist?”

It’s a console that runs terribly, has awful controllers and apps that can’t be used completely unless you buy third-party items you wouldn’t usually associate with a gaming console, like a keyboard and mouse.

It’s not all bad, the design is nice but for everything else, it’s way behind even a minimal standard you’d expect from today’s in-house gaming consoles.

Its worst sin is its price – it’s more expensive than the best gaming consoles on the market.

Nostalgia isn’t worth this outrageous price.

Individually the Modern Gaming Controller and the Classic Joystick cost $129.

To put that in perspective, the PS5 costs $815 and the Xbox Series X costs $800. When this is taken into consideration, the Atari VCS is ridiculously priced.

I was born after the Atari 2600 was released in 1977, so I don’t have any nostalgic connections with this console. However, it’s obvious Atari is aiming to pull on the memories gamers had of their first console, with the design of the Atari VCS.

And for those that do have happy memories of the 2600, I can imagine the design of the VCS is pleasing. It maintains the wood, (yes it’s actually wood) veneer and the plastic black grill casing that’s reminiscent of the 2600, albeit upgraded with modern hardware.

The console has 4x USB-A ports on the front and back of the console. There’s also an ethernet port, an HDMI port and an AC power port.

The Atari VCS has terrible performance. It’s sluggish and slow, and its fan is constantly whirring. Loudly.

Navigating through the menus is a chore. It’s laggy and tiresome to navigate. And that’s just the menus.

When playing games, the console performs okay, but remember these are games from the 70s and 80s. They aren’t particularly demanding. The newer games that can be purchased from the store that have slightly better graphics don’t work as well. But they’re still playable.

The console is theoretically capable of being used in 4K, but that’s not realistic. Changing to 4K resolution frustratingly restarts the console and when it finally boots up, it’s unusable.

It feels like Atari slapped on a 4K compatible sticker just to appease those who want to game in 4K. Don’t be fooled by this claim, though. The VCS will not work well in 4K. I spent my time using it in its default resolution of 1080p, and even then, it wasn’t as smooth as it should be.

The Atari VCS comes with the VCS Vault built-in. This is a collection of 100 Atari games that you can play instantly. If you want more, you can purchase games individually or you can get the VCS Vault 2, which gives you another 50 games.

For someone who doesn’t have the nostalgic connection with the console, I don’t connect with the games from four decades ago either. I understand that someone who played them as a child may get more enjoyment out of them than I did, however there wasn’t anything that drew me to these games.

In Australia and most of the rest of the world, the VCS comes with Antstream Arcade, a streaming service for retro gaming titles. Unfortunately, this isn’t available in New Zealand, which is a shame because this is a larger library that’s more likely to have that favourite game you played as a kid.

When I first started the Atari VCS, I was surprised to see I could download popular streaming services like Disney+, Netflix, Amazon Prime and Twitch.

It wasn’t until I started trying to use these apps that I realised the console wasn’t fully compatible with these services.

Bizarrely you can’t control any of these streaming services with either of the console’s controllers. They only work if you use a keyboard and mouse or the VCS companion app.

The companion app lets you turn your phone into a controller for the console, and it’s fine. However, I have two controllers already connected to the console, now I need to get my phone out, open the app and connect to the VCS just to watch my streaming services.

There are two controllers you can get for the Atari VCS. These are the VCS Classic Joystick and the Atari VCS Modern Gaming Controller. Both cost $129.

Both of these feel plasticky and cheap, and they don’t work particularly well.

The classic joystick is an obvious throwback to the Atari 2600, but after using it once, I never used it again. Navigating games with it, while simple, isn’t as effective as the controller. I put that down to the fact the joystick can spin. Every time I pushed the joystick to one side, it would spin 360 degrees, and my hand would slip off. Sure this may have happened with the original joystick but controllers have moved on.

The gaming controller isn’t great either. I found there was a significant amount of stick drift, it’s a weak plastic, and the D-pad is unresponsive. When comparing it to Sony’s DualShock 5, which is the same price, it’s not even close.

I struggled using the controllers on certain games. I could navigate the menus of Pong with the Classic Joystick, but as soon as the game started, it wouldn’t work. I had to use the Modern Gaming Controller. However, it was so sensitive that my Pong block would fly off-screen with a minimal push. Adjusting and altering the controls for every game in a library of 100 isn’t fun.

I also had trouble connecting the controllers to the console. They work wirelessly via Bluetooth, but it was unreliable and every time I turned the console off and then on, they had to reconnect. I just resorted to plugging them in. Not ideal for setting up in a lounge.

The Atari VCS boasts a PC mode in which you can install a signed operating system like Windows onto the console.

I’m still baffled as to why this is a feature.

The process of putting Windows onto the console is simple, all you need is a hard drive with Windows on it, and you plug it in. To go back to the console’s standard OS, you just unplug it. But all that does is provide you with a slow Windows PC.

Theoretically, this will allow you to play games from other platforms like Steam, but it’s not a powerful device and you’ll probably end up playing the Atari Vault games, which interestingly is available to purchase on Steam and has the same library as the VCS Vault.

The Atari VCS is trying to cash in on gamer’s nostalgia however, even if you were the Atari 2600’s biggest fan, you’re not going to enjoy the VCS.

It runs terribly, it’s ridiculously priced, the controllers are cheap, and nothing seems to work properly.

In a market as competitive as the gaming console market, I’m left asking, why? Why is it the same price as the PS5 and Xbox Series X? Why can it be used as a PC? Why is the Atari VCS even a thing when you can play all of its games on better devices?

If you’re dying to play your favourite childhood games from the Atari 2600, I advise you to play them on Steam. The VCS is overpriced and doesn’t work well.

Facebook
Twitter
WhatsApp
Linkedin
Previous articleIf you’re over 30, it’s safer not to use emoji
Next articleGoogle could have a foldable Pixel 6 in the works