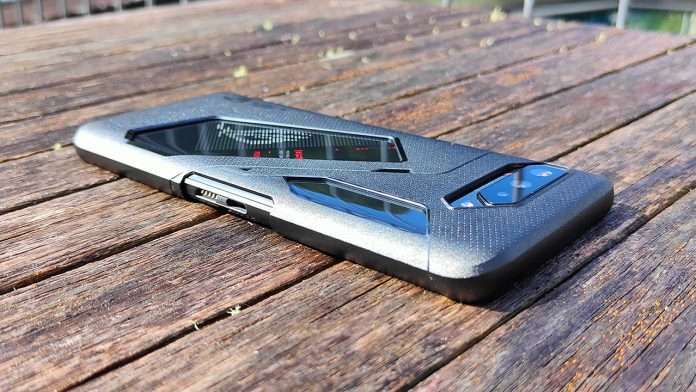 The ROG Phone 5 isn’t your normal smartphone. This is a phone that’s made for gaming first and smartphone stuff later.

This is a Republic of Gamers (ROG) phone and it’s been built specifically for gaming. It handles mobile games like PUBG and CoD Mobile with ease. Its shoulder buttons, high-refresh-rate, and massive battery make it closer in specs to a Nintendo Switch rather than high-end smartphones like the iPhone 12 or Samsung Galaxy S21.

Alright, let’s get the obvious out of the way first. This is a phone designed for gaming. Any device with the ROG (Republic of Gamers) brand will obviously prioritise gaming performance. And the ROG Phone 5 is one of the best gaming phones on the market.

Every part of this phone has been designed with gaming in mind. We were given the 16GB RAM version of the standard model, and it flys. Games load quickly, and swapping between apps is a breeze. The powerful Qualcomm Snapdragon 888 processor inside the phone, paired with the sleek Zen UI overlay and Android 11, makes the ROG Phone 5 feel fast. It’s simple and easy to navigate, and it works well.

I particularly loved the shoulder buttons on the ROG Phone 5. Much like the bumper buttons on a console controller, these “ultrasonic sensors” worked well and were easy to access with my left and right index fingers. The ROG Phone 5 feels like you’re holding a controller. It’s a natural position, and it makes playing more “hardcore” games like Call of Duty mobile or PUBG, a comfortable experience as opposed to the awkward, screen tapping affair with other phones. Once you’ve played a game with the bumpers, you’ll never want to go back.

The ROG Phone 5 also comes with two native gaming apps that work well. The first is the Game Genie app. This app makes important gaming information accessible, and it allows you to customise your gaming experience. Sliding in from the left of the phone opens the Game Genie overlay, enabling you to turn off notifications while gaming and show important information like your FPS and phone temperature. It also allows you to optimise your phone resources for the game you’re playing. You can turn on X-Mode, which is designed to enhance performance. However, I didn’t see much change in how the phone was running when I had this on.

The second app is the Armoury Crate. This app allows you to customise individual games to your liking. You can set up keymaps, turn on visual enhancements, change the refresh rate and a whole lot more. It’s impressive, and I especially liked how it was specific to individual games. The settings I choose for COD Mobile weren’t relevant to Clash of Clans, and the Armoury Crate allowed me to set up different profiles for both, it’s brilliant. You can also see statistics about your games like how long you’ve played, and it acts as an easy to use game library, similar to Steam or PlayStation, where you can see all your titles and open them. I liked it a lot.

With the premium versions of the ROG Phone 5 you also get the “Aeroactive Cooler 5.” This is used to keep your phone cool when playing graphic-intensive games that can cause the phone to heat up. I found it easy to use. It works well and has two programmable buttons on the back that you can use while gaming. However, I never came across a time where I thought I need to attach my cooler. So I didn’t end up using it much. But it was nice to have.

An area where the ROG Phone 5 really shines is its speakers. These are the best speakers I have heard on a smartphone. The device has two front-facing 12x16mm speakers, and they’re brilliant. They have Dirac HD sound, and they provide a well-balanced mix. Oh, and they’re loud, really loud. I could easily get a louder sound with the ROG Phone 5 than my laptop. This is great for gaming but not so great for public transport users.  You can view a list of our best noise-cancelling headphones here. I also appreciated that the speakers don’t get covered up while gaming, creating a muffled sound. The case doesn’t affect them either. These speakers also work well with videos. YouTube and Netflix sound great. It’s impressive.

The ROG Phone 5 is a large and somewhat heavy phone weighing 238g, which is only slightly heavier than the iPhone 12 Pro Max (228g). You will need big hands to use this phone one-handed. However, I appreciated its solid build. When gaming, I’m prone to moving my phone around a lot, especially when using motion controls, and the sturdy build of the ROG Phone 5 is comforting.

I also like that this phone doesn’t scream out “gamer phone.” It’s more discrete than other gaming-oriented devices. Don’t get me wrong, it still has the showy RGB logo on the back that glows different colours, but overall it looks like a normal phone which I like.

Functionally the design of the ROG Phone 5 is also impressive. The side port that allows you to play games in landscape mode while charging the phone is useful, and it also makes attaching accessories to the phone a breeze. As with all phones, there are volume buttons and a screen on/off button on the side. These are cleverly positioned to not get in the way of the shoulder bumpers, and the case and functionally the phone feels natural.

I also appreciated the 3.5mm headphone jack on the phone. It’s just something I like to have the option of using with my device.

The ROG Phone 5 has a 6.78-inch Full HD Plus AMOLED display with a 2440 x 1080 resolution. It’s a great screen. It’s vibrant and sharp and on par with the screens found on other flagship phones. While it may have a lower resolution than some devices, it still works well. I barely noticed any differences between the QHD+ (3216 x 1440) screen on the OPPO Find X3 Pro and the ROG Phone 5. The camera notch is also very small. The screen extends from edge to edge, and it looks great.

The most crucial factor here, though, is its refresh rate. The ROG Phone 5 supports a 144Hz refresh rate which makes games that support it, buttery smooth. It’s also beneficial for general phone use, not just gaming. Surfing the web and navigating the phone is very smooth and responsive. This is equally due to its 300Hz touch sampling rate. The phone responds a lot faster to touches than other phones. For comparison, the iPhone 12 Pro Max has a touch sampling rate of 120Hz.

The camera on the ROG Phone 5 is one of the only areas where the phone slightly struggles. The device comes with three rear cameras a 64MP primary camera, a 13MP ultra-wide camera and a 5MP macro lens. There’s also a 24MP front-facing camera that works as it should. While these cameras aren’t bad, they don’t quite meet the high-quality standards set by other flagship phones like the iPhone 12 and the Galaxy S21.

With that said, the ROG Phone 5 still takes great photos. The daylight photos I took with this device are comparable to the ones I took with the S21. However, it does lose a bit of clarity when zooming in. The ROG Phone 5 doesn’t have a telephoto lens, prioritised for zoom photography, and it shows.

I also found the portrait mode on the phone didn’t produce as good results as other phones. It was hard to focus the camera correctly in some instances, and low-light photography is noticeably lower quality than other top-of-the-range phones.

You can film 8K video at 30fps, 4K video at 60fps and slow-motion video in 4K at 120fps. This is all pretty standard, and I didn’t come across any issues when taking footage.

Overall, although the cameras weren’t as good as other phones, I was impressed by the results of the photos with the ROG Phone 5. This is a gaming phone that takes very good pictures, and I love it.

The battery in the ROG Phone 5 is a beast. I should say batteries because Asus has implemented a dual battery system with this device. The phone has a 6000mAh capacity, made up of two 3000mAh batteries.

This dual-battery design allows for faster charging than the previous ROG Phone 3. The phone can get to full battery from 5% in around 50 minutes. It’s great. This speed is partly due to the massive 65W charger that comes in the box. And that’s an addition that is always welcome in my book.

The new battery design also helps to keep the phone cool. When playing COD mobile for 30 minutes, I didn’t noticeably feel the phone get warmer. And after that half-hour of gaming, the battery had only gone down 5%. It allowed me to game for a long time, and it works well.

I am very impressed by Asus’ ROG Phone 5. This is clearly a phone designed for gaming. However, it does everything else well.

The design is smart and streamlined without looking too “gamer”, the display is vibrant and crisp, and the battery is a beast. Sure the cameras aren’t as good as other phones on the market, but I was impressed by what I could accomplish with the modest camera array.

The ROG Phone 5 is brilliant for gaming. The shoulder buttons are a must-have for phone gaming; once you’ve used them, you’ll never want to go back, and the in-built apps like Game Genie and Armoury Crate are fantastic additions that make this one of the best gaming phones on the market.