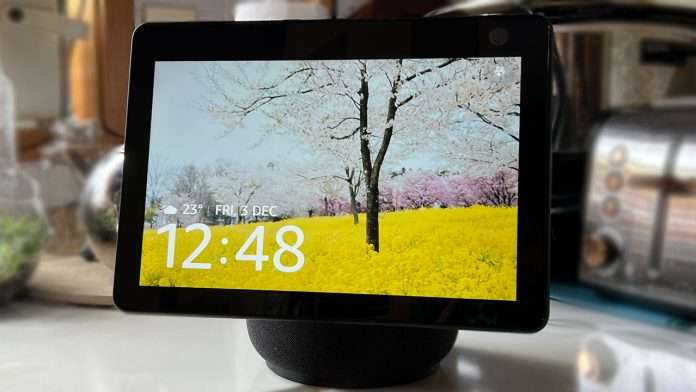 The Echo Show 10 doesn’t introduce anything new other than its rotating screen and its 13MP front camera. Both of which are great, only if they benefit you.

The rotating screen is at its best in a large room where you move around a lot, but it’s a bit pointless in a smaller room. The 13MP camera provides a clear and detailed picture but it’s only useful if you make video calls. And who’s doing that? No seriously, who’s video calling from their smart home device? Because I’m certainly not.

If you don’t require either of these things, then there isn’t a lot here to get excited about. YouTube is still terrible, and the device has a poor touchscreen that makes accurately controlling the device (without your voice) a pain. It’s saving grace, in my kitchen at least, is the rotating screen.

The familiar design, found in previous Echo Show devices, is gone. The Echo Show 10 is entirely different and undoubtedly unique.

The 10.1″ HD screen attaches to a cylindrical base allowing it to rotate 350°. When Alexa is summoned, the screen will spin to look at the person speaking. It also allows for motion tracking in which the screen will follow you as you move around the room, turned on via the button on top or by saying, “Alexa, follow me.”

There’s no denying it’s cool. The brushless motor inside the device is incredibly quiet, and its tracking is accurate. Depending on the layout of the room you have it in, it’s a great feature.

In my house, the Echo Show 10 is in the kitchen, which I’m sure is the case for many households. The rotating screen makes it easy to watch TV shows and videos from anywhere. I can be cooking on one side of the room, move to the other side to do the dishes, and the screen will still be in perfect view. For smaller rooms, it may not be as useful.

The design does make it a bit hard to place, though. Because the screen can rotate, it’s best placed on a floating counter or on an open corner, neither of which I have in my kitchen area.

It didn’t sit as nicely as my previous Echo device when placed against a wall, but I would much rather it look a bit weird than have to manually turn my device like I had to with my older Echo. To accommodate this, it has obstacle detection, where it recognises walls or obstacles and won’t try to rotate beyond those points.

If you’re looking for an iPad-quality display on your smart home device, this isn’t it. The display isn’t as clear or sharp as premium handheld devices. But how many people are sitting down to watch a TV show or movie on their Echo Show 10?, It’s more for playing something in the background while concentrating on something else like cooking, so the picture quality wasn’t a major issue.

What was an issue, though, was the touch controls. The touch sensitivity and accuracy is poor. It feels more like using an old-school GPS from the turn of the century as opposed to a new product released in 2021.

It’s sluggish and laggy. I often would drag the menu from the top of the screen, only for it to pop up around 10 seconds later.

Yes, the device is probably supposed to be used mainly with voice commands, but it’s pretty hard to tell Alexa to find the exact video you’re looking for on YouTube without resorting to touch input. In fact, it’s impossible. There are times when you need to use the touch controls, and I constantly found myself getting frustrated with it in these moments.

The display has a lighting sensor. It will dim and change colour depending on the lighting in the room. This works as it should.

The bass is good, the mix is precise, and it’s easily loud enough to be heard in a busy room.

The Echo Show 10 has a 13MP front camera that produces a sharp, clear and detailed picture.

This is used for motion tracking. I never had the Show 10 lose me unless I intentionally went out of its generous range.

The only time it struggled was when there was more than one person in the room. It got confused about who it was supposed to follow at times, but if the person summoned Alexa, it would turn to face them, and the confusion would be resolved.

If you’re the type that regularly makes video calls with your smart home display then you’ll love the improvements. The camera will automatically zoom in and out to keep you in the shot and allow others into the shot.

To make a video call, you either need to use Alexa Drop-in, which requires the Alexa app on a phone, Skype or Zoom. There isn’t any support for more mainstream video calling apps like Facebook Messenger or Whatsapp, which is a setback. I’m not convinced people are calling each other using Alexa Drop-in very often.

One area where the camera can potentially come in handy is its Home Monitoring feature. This allows you to access the camera via your phone. It’s useful if you want to check in on your home but relatively useless for security. It doesn’t record video, and it displays a message showing that the camera is live when you access it. Not ideal if someone’s in your house when they shouldn’t be.

As is to be expected, the Echo Show 10 supports Amazon Prime video; however it now also supports Netflix, which is a great addition.

Strangely it doesn’t support other services like Apple TV and YouTube TV, both of which are available on Amazon’s Firestick devices.

It also doesn’t have a dedicated YouTube app. To access YouTube, you have to go through the built-in web browser. And even then it only provides the mobile version of the website – it’s terrible. YouTube is what I default to most for a 5-minute video while making my breakfast, but it’s so bad on the Echo Show 10 that I end up using my phone instead. Which defeats the purpose.

The Echo Show 10 still does everything you would expect of an Alexa device. The best of which is the cooking recipes that pop up on the home screen. I have stored and made a lot of meals we’ve seen on the Show 10’s display.

It’s also compatible with Zigbee devices so you can set it up as part of your smart home.

In terms of functionality, the Echo Show 10 doesn’t bring much new to the table. It’s still the same Alexa that answers your queries, opens Amazon Prime and plays music when you ask it.

Besides its design, this is a familiar Alexa device with the same problems as previous devices, no dedicated YouTube app, and a very poor touchscreen.

It’s great for watching Amazon Prime and Netflix; however other popular streaming services are still lacking. The worst being YouTube.

If you already own an Amazon smart display device, the only reason you’d want to upgrade to an Echo Show 10 is if the rotating screen benefits you. Its usefulness is dependent on the room you put it in.

If you have a large room where you move around a lot, like a kitchen, and a place to put it, it’s fantastic. If not, then you’d be okay with older Alexa devices.