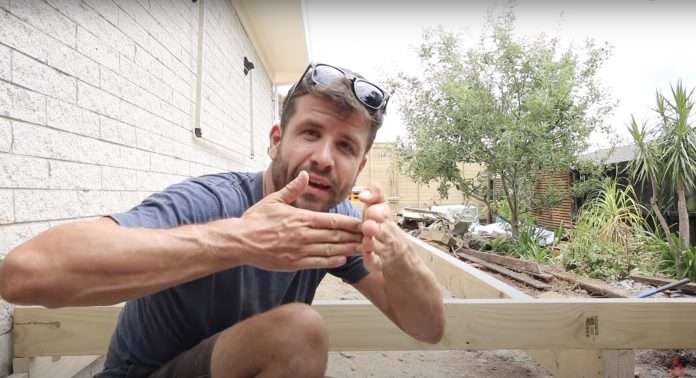 Scott Brown’s face may be familiar to many of you. The Auckland-based carpenter has over 275,000 followers on YouTube, and if you’ve ever searched the web for carpentry-related DIY advice, you’ve probably already engaged with Scott’s content.

That’s what happened to me a few months ago when I gently began researching “how to make a door frame”.

After wasting five minutes watching a rival’s video titled “Never buy a Door Frame AGAIN!”, I clicked on the next video YouTube had lined up for me and got a shock when a mild Kiwi accent greeted me with “Scott Brown here”.

Much like his carpentry, his videos are careful, precise and comfortable. Brown shoots all of his videos on location, mainly in Auckland, where he’s doing real work, on real houses, while getting paid real money for his labour.

Why is he doing this? Where does he find the time? How has his YouTube Channel affected his business?

Scott, and his partner (and co-director of the business) Jess, agreed to meet me during his “Smoko” in a cafe in Onehunga near his then-current job.

Subscribers to Scott Brown Carpentry will be familiar with Jess’ brief on-screen cameos. They’ll be less familiar with how involved she is in the success of the channel/business. Scott Brown is the star, but Jess is equally responsible for its success.

It makes sense too, getting 275,000 subscribers is no accident – it takes a lot of hard work.

During our conversation, I got the feeling Scott was destined to be a YouTube star. His work ethic, attention to detail and passion for video are impossible to mistake.

“I’ve always been interested in making videos” he started. “I used to film myself and friends skateboarding when I was a teenager.” Then in 2016, during his OE in Edinburgh, Scott starting doing daily Snapchat stories of his carpentry work and “as the editing became more elaborate, I wanted something more permanent”

“I was watching lots of YouTubers at the time – Samurai Carpenter, Finish Carpentry TV, Casey Neistat and Peter Mckinnon – [and] I thought I could make something that incorporates the vlogging format with carpentry, so decided to give it a go myself.”

Other YouTubers in the same league as Scott often quit their jobs in order to manage and monetise their Channels. Scott can’t do that. His thing is: part on-site diary; part carpentry tutorial. The experience of going to work with Scott and watching him apply his trade and problem-solve is, I think, part of the charm.

Work is a running theme – Scott’s days start early. He’s a tradie, after all, so there’s no surprise there. What is surprising, though, is how he starts his camera work 2-3 hours before starting his carpentry work – driving to new locations to capture scene-setting B-Roll.

This could be the sun rising over Auckland’s CBD, or the America’s Cup fleets leaving the harbour or just rain lashing down on his exposed project. These little touches, that take seconds to watch and hours to create, demonstrate his passion for his YouTube Channel.

When Scott does get home, work starts all over again, as he (and Jess) begin editing their, erm, work. Regularly fine-tuning their videos until the early hours of the morning before hitting the Upload button on YouTube. This – uploading his videos – is the biggest tip Scott has for any Kiwis thinking about starting their own YouTube channel.

“When I started my videos, I wanted to improve my editing and I have a tendency to be a perfectionist. So, to get past that, I set a goal of 100 videos in my first year. This pushed me to upload videos even if they were not perfect. I learned a lot in a short space of time and by focussing on video uploads rather than subscriber or view numbers, which I have no control over, this helped motivate me.”

Is the financial reward for their hard work worth it? Scott and Jess wouldn’t go into too many details but confirmed it was good enough for Jess to quit her former job as a Marketing Coordinator and apply herself full-time to the Scott Brown Carpentry brand instead. Oh, and as you might have guessed, the number of clients contacting Scott (through his website) has grown in sync with his YouTube popularity.

Another perk is the free tools Scott now gets sent to review and feature in his videos. Brands such as Milwaukee and Makita recognise the quality of their content and, understandably, want products featured.

When the subject moved on to “what next?”, the options seem endless. “We want to build a new home from start to finish,” Jess told me.

“We have mostly been lining up bespoke renovations, but I think it would be cool to show the audience what a new build is like in New Zealand. In particular, we are getting interested in energy-efficient building and would love to build and film a passive home either with a client or maybe hopefully one day, for ourselves.”

One thing is for sure, Scott will keep making videos. Scale is not an option here, as there’s only one of him and the success of Scott Brown Carpentry on YouTube is tied to Scott getting in his work van every day, turning up, and grafting. Though, hard work doesn’t seem like something this duo are afraid of.

Sponsored content is the obvious route to (more) financial success. Jess confirmed that they “are slowly embracing more of these opportunities” but are being careful to keep the core content and sponsorship balance manageable.

While we didn’t discuss this during our “Smoko”, I wouldn’t be surprised if something bigger comes along. The quality of Scott and Jess’ video work lends itself to more than just YouTube-ing.

Trade brands like Mitre 10, Bunnings, Bosch (etc.) could do a lot worse than reaching out to Scott and Jess to learn from their success. I think TVNZ and Netflix should pay attention, too – Scott Brand Carpentry it’s a ready-made hit.

Whatever the future holds for Scott and Jess, there are 275,000 (and counting) reasons to be optimistic.

One more thing. I asked Scott what equipment he uses to create his content: “I use a Macbook Pro and edits using Final Cut Pro. [My] camera is a Canon EOS R with a 16-35mm lens that I use 80% of the time, and then a 50mm lens that I use for close-ups. For B-roll, I use both lenses and occasionally my Mavic Air Drone. The microphone is a Rode Video Mic Pro Plus, that slides onto the hot shoe of the camera. Jess uses a Dell XPS and for design and photo editing, she uses Affinity Designer and Affinity Photo (it’s a product similar to Adobe and WAY more affordable).”