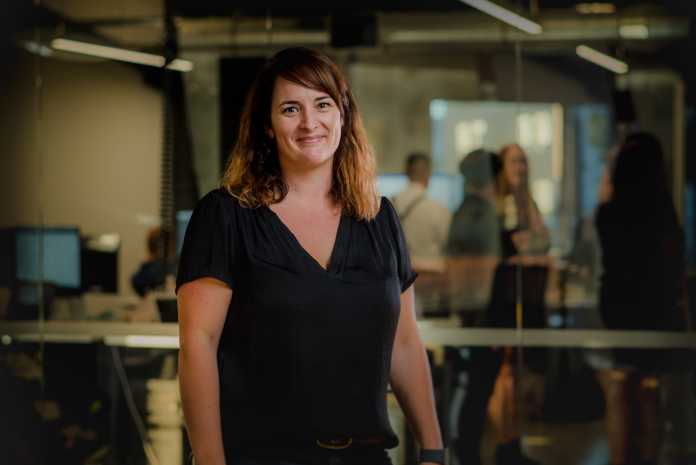 Nicole Upchurch is CEO of CENNZnet, a New Zealand built public blockchain and Decentralised Application platform and has 15 years of experience transforming some of NZ’s largest companies through periods of unprecedented digital disruption and change.

Among its many initiatives CENNZnet is about to launch its own NFT marketplace called Litho this month. Litho is a place where anyone can mint an NFT and post it for sale.

All these initiatives spring from Centrality – a venture studio that partners with leading innovators in key industries to create a marketplace of applications that allow users to manage everyday tasks and experiences using peer-to-peer transactions, using blockchain-enabled infrastructure – you may have heard about their CarbonClick programme that offsets carbon emissions via CO2 credits using blockchain technology, something Litho also employs.

While it’s relatively early in the NFT space the market is soaring. Reuters reported that sales volumes of non-fungible tokens (NFTs) surged to $10.7 billion USD in the third quarter of this year.

If you’re a creator with a great idea for an NFT but little knowledge of how to get your NFT to market, Litho just might be the answer. It aims to be the Trademe of NFTs – no coding or crypto experience necessary.

We talked to Nicole to find out more…

Despite the eye-watering prices some NFTs have gone for – some more traditional art collectors may find it difficult to get their heads around what an NFT is and how it can have value – what do you say to them?

That’s a good question. There are a couple of important things to note: People’s lives are becoming more and more digital – your social network, connecting with people across the globe, sharing information. Likewise, many traditional businesses are moving to an online approach, why wouldn’t artists and creators also take advantage of the digital space as a new revenue opportunity?

Also traditional art will always be appreciated in a different way to NFTs. They both have value and it’s often not ‘one or the other’.

Ok – I’m a creator who has an idea for a NFT; what sort of technical skill do I need? Do I have to know about blockchain and crypto?

Our new NFT marketplace, Litho, will allow anyone to mint and sell their NFTs regardless of their experience with coding or crypto. The great thing about it is that we’ve done the coding part for you, minting and selling an item is as simple as loading an item to a site like Trademe. The beta launch is happening in early Oct and we will be continuously optimising the site from launch so that there are new features and options for creators and users.

Anyone who mints or buys an NFT will need to create a digital wallet and purchase some crypto, which is going to be new for most people. We’re working hard to try and make that process as simple as possible.

CENNZnet – is offering creators money to create NFTs – what’s the response been like?

I absolutely love seeing the wide variety of styles and ideas that are coming through from people who are applying. The ones that are really catching my eye are the people who are using NFTs to their full potential. We’re working with Andy Blood as our first grant recipient. Andy is minting the book that he’s written as an NFT which will be a world first. We also have a music artist who will be selling some of the original artwork from their album as a ‘limited edition’ set, is also giving people who purchase these NFTs special privileges – discounted events, merchandise etc.

What makes a sought-after NFT?

Honestly, I wish that I could answer that question. Sometimes it’s the artist or creator, sometimes it’s the metaverse that’s being created and sometimes it’s the style of art. It’s still early days so there isn’t really any formula to it yet. However, if I’ve learned anything over the last year my tips would be – Come with a story or a mission that people want to get behind. Damian Hirst created ‘art as a currency’, @cryptodicksnft mints a new dick every day and posts it on Twitter, FLUF have created 10,000 rabbits that have unique traits and that you can name and create a story for. Successful NFTs tend to be deeper than just a JPEG. Community is everything. The most successful projects in this space really engage with their audience like a family. Their community treasures their NFT because they get to be part of something more than the art.

To most people outside the sector mention Web 3.0, blockchain or cryptocurrency and their eyes glaze over. Has the tech sector done enough to help businesses get to grips with these concepts?

In the four years that I’ve been working with blockchain I’ve noticed 3 significant stages. Early on people were interested in the hype, but the concept was too complex for most people to get their heads around – this was the ‘eyes glaze over’ period. During the next stage we saw concepts like Defi emerge with real use cases that people could understand. This is the ‘I want to know more so I can have an intelligent conversation with my friends’ period. Right now, I get people contacting me almost every day with great ideas that could work in blockchain – especially the NFT space. It’s become the ‘ideation’ period, where people start working on how they can integrate blockchain to take their idea to the next level.

One of the biggest misconceptions that I think people have is that it needs to be ‘blockchain everything’. 99% of the ventures that we work with only use blockchain where it makes sense, not end-to-end. Our team spends quite a bit of their day on our Discord channel (https://discord.link/cennznet ) talking to projects about their ideas and how we can help. We also run meetups and hackathons to help people to get their head around blockchain concepts and how they can be used.

NFT’s involve mining making them bad for the environment – what sort of artist is going to embrace that?

One of the most emotive debates about NFTs right now relates to their energy impact and how this aids or damages our fight against the climate crisis.

The first thing you need to know is that NFTs in themselves don’t produce carbon. Some blockchains do, in the act of running the blockchain. Specifically, it is the chain’s method of producing blocks that can be very energy-intensive. It doesn’t matter what information is in those blocks, it’s the act of creating them that adds to the chain’s overall carbon footprint.

Secondly, there are 2 kinds of blockchain technology:

Alongside shifts to less energy-demanding technology, the blockchain community is working hard to offset its carbon impact. For example, while the Ethereum network is moving its chain from proof of work to proof of stake, its team minted an NFT that generated enough revenue to offset the carbon cost of every NFT that has since been produced on the network. So even the dirty networks are working to offset their carbon contribution.

CENNZnet has built our network using Proof of Stake technology, so any NFTs that are minted on our network are already very low energy usage. On top of that, we also work with local offsetting venture CarbonClick to offset our impact and achieve not just carbon neutral but carbon negative impact.

You’re involved with Centrality – to those who haven’t heard of it – what does Centrality do?

Centrality was the original start up for our ecosystem. There are around 30 ventures that have grown from Centrality and work together to help each other scale.

CENNZnet is one of those ventures. CENNZnet provides projects with the underlying blockchain network and open-source protocols that they need to build a decentralised application. Our aim is to make the process of integrating blockchain as easy as possible, so we put user experience first. We also want to give startups a leg up so that they don’t have to spend 2 years and a million dollars creating software that every app needs, so we’ve done that for them, they just need to use our open source code.

Is Centrality, like many other tech companies I talk to, finding recruiting good talent difficult?

The shortage in NZ is something that all tech businesses have to deal with, but we’re very lucky to have such a great team of talented and passionate people working for us. It’s more than a job – the people that work here can see the unlimited potential of what we’re creating and how we’re helping other start-ups.

Can you see a time when crypto replaces fiat currency?

CBDCs are definitely getting some interest around the world. Like most people in this space I’m watching with my popcorn

It strikes me that the NZ tech scene punches way above its weight – what do you put this down to?

I can’t speak for all businesses, but when you work in a start-up environment you see brilliant business ideas every day. People need the space and time to be able to explore these ideas and I think that NZ has a bunch of organisations and agencies that provide that.

Finally, Nicole you’ve been in the NZ tech sector for some time – but with blockchain/crypto it does feel like a whole new chapter is beginning…your views?

I’ve been a true believer in blockchain since I started in this role. The idea of allowing individual users to take ownership of their digital identity, rather than allowing centralised businesses (like Google, Facebook, Amazon etc) to monetise their data is gaining a lot of momentum. These same users can participate in the apps that they engage with and have a say on their roadmap and govern the decisions is another amazing attribute of the tech.