theBit.nz
HomeOpinionBoston Dynamics’ viral appeal is undeniable, but where will the money come...
Opinion

Boston Dynamics’ viral appeal is undeniable, but where will the money come from?

20/08/2021
0
0
HomeOpinionBoston Dynamics’ viral appeal is undeniable, but where will the money come...
Opinion

Boston Dynamics’ viral appeal is undeniable, but where will the money come from? 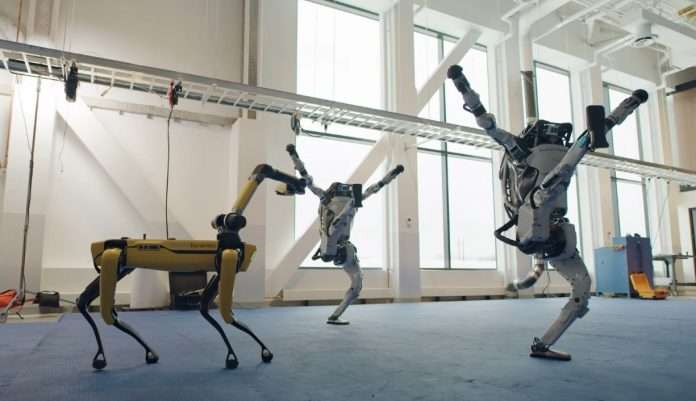 Boston Dynamics has a long history of producing videos that briefly make the internet lose its collective minds, and the latest one is no exception. In it, two human-like robots very slowly work their way round a small parkour assault course, run-walking along small inclines and jumping off beams.

“Big deal,” I thought, watching the latest video. “If that’s all parkour is, then maybe I could become a legend of the sport myself.”

Then the robots did two synchronised backflips in a row, and I realised that I had truly been bettered. The robots have won – well, against me, anyway. You may fare better.

Actually, lower that white flag. Watch the accompanying ‘behind the scenes’ video, and you’ll see that even the most advanced robot is capable of very human failure.

I’m not saying I’d be any more graceful. I’m just saying that I wouldn’t need a team of brilliant robot engineers to pick me up and get me to try again – just some words of gentle encouragement and an Ibuprofen. Add to that the fact that I’m pretty sure my battery life is stronger, and humanity might have a chance after all.

Of course, I’m being flippant. It’s hard not to watch any Boston Dynamics video from the past decade and not be blown away at how naturally the robots move, even when they’re being beaten with hockey sticks.

But for all the impressiveness, it’s pretty clear that internet virality doesn’t equal money. Well, not that much anyway. Putting Boston Dynamics’ channel details into a YouTube earnings calculator, the site estimated the company had made around USD$1m in total, and an average of USD$28,658 per video.

For comparison’s sake, Licking Guy – a channel devoted to a gentleman licking weird and varied things – only pulls in an estimated USD$704 per video. But you would imagine that Licking Guy’s overheads are considerably lower (even if he ends up spending more on antibiotics.)

Of course, nobody expects YouTube income to be Boston Dynamics’ main money maker, but it’s slightly concerning that a company pushing 30 years old still hasn’t proven where it can make money.

It’s not proved a reliable enough money maker to stay under the same ownership for very long. Alphabet (the parent company of Google) bought the company in 2013, before selling it to SoftBank just five years later. SoftBank, in turn, sold 80% of the company to Hyundai for USD$880 million late last year, and while that represents a handsome profit on the rumoured USD$165 million the company was reported to have paid Alphabet, it’s still not a giant vote of confidence for a company with pockets as deep as SoftBank.

“We are thrilled to partner with Hyundai, one of the world’s leading global mobility companies, to accelerate the company’s path to commercialisation,” Masayoshi Son, the CEO of SoftBank, said of the sale. “Boston Dynamics has a very bright future and we remain invested in the company’s success.”

Reading between the lines, the word “future” could be doing some heavy lifting here, and it may not say terribly flattering things about the here and now.

Boston Dynamics currently sells its Spot robots to businesses for USD$75,000 a pop and a Bloomberg report indicates that this had raised at least USD$30 million in revenue to date.

That doesn’t sound too bad, until you read on and see that SoftBank paid USD$150 million every year in operation costs – around three times what the report reckons Alphabet was throwing at the business, and not something that could easily be plugged, unless Spot sales increase five-fold. Hyundai’s production lines could presumably help bring the costs down and up the sales figures a bit, but there may still be a hard limit on demand.

Who is buying Spot at the moment? Well, you can get a whole squad of them to do a bizarre dance routine if you like, but a more common use is as a robotic night watchman, patrolling areas that are too dangerous or boring for humans.

“We mostly sell the robot to industrial and commercial customers who have a sensor they want to take somewhere they don’t want a person to go,” Boston Dynamics lead robotic engineer, Zack Jackowski, told The Verge last year. “Usually because it’s dangerous or because they need to do it so often that it would drive someone mad. Like carrying a camera around a factory 40 times a day and taking the same pictures each time.”

Doesn’t that sound like something a drone could do for a fraction of the price? It sure does.

Maybe it could move to a residential setting instead? Not so fast. “A lot of people who aren’t familiar with Spot think it would be great for in-home use, either helping the elderly, the sick, or people with special needs,” said Sam Seifert, another engineer. “I think that’s a great target to keep in our sights, but the technology needs to improve by leaps and bounds before we’re ready to operate in a constrained space around humans.”

This hasn’t stopped Hyundai dreaming. The acquisition press release specifically mentions “the aim of developing humanoid robots for sophisticated services such as caregiving for patients at hospitals.” Given Seifert’s warning above, this sounds like another viral YouTube video in the making, but not one the company would be terribly keen to share far and wide.

Hopefully Hyundai knows what it’s doing and has a bold plan to make the company a money maker. It didn’t pay USD$1bn for a company just so YouTube commenters can enjoy a lively debate over whether an army of Spots could beat Optimus Prime in a fight, after all.

Facebook
Twitter
WhatsApp
Linkedin
Previous articleFor some reason, Facebook thinks you’ve been craving VR meetings
Next articleOutlook could soon be the tone police for your emails