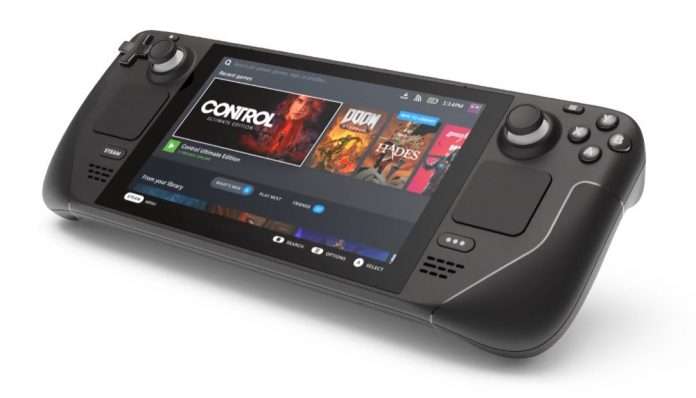 It seems Valve really will do literally anything to avoid making Half Life 3 or a new Left 4 Dead game. The company has now decided it wants to go after the portable gaming market with a PC in your pocket called the Valve Steam Deck.

It may look like the Nintendo Switch hooked up with a Sega Game Gear, but the Steam OS powered device has some impressive hardware on the inside – and thankfully it won’t chew through AAA batteries like the aforementioned Game Gear, with the 40Whr battery reportedly good for two to eight hours of use, depending on the game.

The hardware itself uses an AMD Zen 2 processor with four cores and eight threads, with graphical output powered by a RDNA 2 1.6 Teraflop GPU. Each handheld comes with 16GB RAM, and will ship with either 64GB eMMC storage or 256/512GB NVMe, depending on how much you’re willing to spend. The company says it plays current AAA games “really well”, but it would be a bit of a poor unveiling if they said anything else, really.

While it has a Linux based environment by default, Valve isn’t averse to you installing Windows on it, if you really want to spend your time navigating a tiny Start menu on a 7-inch screen. Said display is a 1280×800 touchscreen with a 16:10 aspect ratio and 60Hz refresh rate.

Of course, you don’t have to play games portably, even if that is the main point. Valve says you’ll be able to output to external displays, and will be launching a Dock for the Deck at some point in the future. It’ll support Bluetooth, meaning you can also connect a keyboard and mouse for the full PC gaming experience. Though at that point, you should probably just buy a gaming laptop.

At the time of writing, it’s a distinctly limited launch, with just the US, Canada, UK and EU getting access on launch day, which is set to be December 2021. Valve says more regions will be “coming soon”, but no doubt their definition of “soon” will differ considerably from most New Zealanders’.