This wearable uses chemicals to help you feel heat, cold and pain in VR

This wearable uses chemicals to help you feel heat, cold and pain in VR 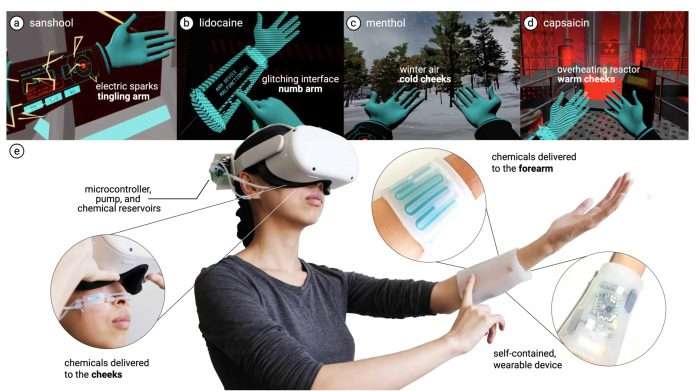 Virtual Reality is uncomfortably immersive. If you don’t believe me, get a VR headset, download Richie’s Plank Experience, and then try and force yourself to jump off said plank to the pavement 80 stories below. Your brain will rebel, no matter how much you remind yourself you’re in virtual reality, trust me.

But you won’t actually feel pain if you jump — well, you might if you’re extremely clumsy, but most people won’t.

For those who want to make future VR experiences feel all too real, researchers from the University of Chicago’s Human Computer Integration Lab have a prototype that may be of some interest.

Attached to the face and wrist, the researchers demonstrate how different chemicals can be applied to the skin via micropumps and silicon patches in order for the wearer to feel different sensations.

In the video below, a malfunctioning wrist pad is replicated first by sanshool for a tingling feel and then by lidocaine for numbing. Meanwhile, stepping out into the cold is replicated with a touch of menthol to the cheeks, and warmed up again via capsaicin — the spicy food ingredient — when the wearer approaches a furnace.

And then there’s pain. That can be replicated via cinnamaldehyde, which provides a localised stinging sensation. If you really want to feel pain when taking a gaming break.

“Localised” is probably the keyword here, though, because while a warm or cold face might feel pretty immersive, a slight stinging in your arm when you’re virtually shot in the leg is probably just a bit disconcerting. You’d likely need these all over the body for a really immersive war simulation.

Still, as a proof of concept, it’s pretty impressive — and certainly less upsetting than that banned but alarmingly popular Kickstarter project which promised to draw blood when you lost a game. Thankfully, dying in VR doesn’t mean you die in real life — unless, again, you’re really, really clumsy or easily startled and have a heart condition.