theBit.nz
HomeNewsThis two-screen laptop could be an artist’s dream
News

This two-screen laptop could be an artist’s dream

This two-screen laptop could be an artist’s dream 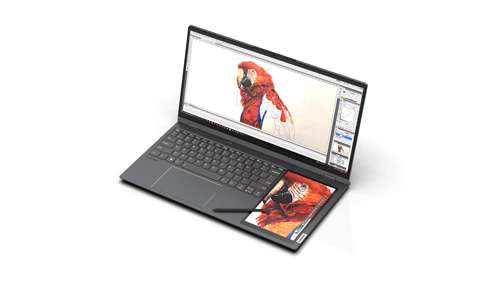 Touchscreen laptops are, frankly, a bit pointless. I write that as the owner of a touchscreen laptop, where said touchscreen has been used only a handful of times, and mostly by mistake. You have to lean over the keyboard, the screens tend to wobble, and you spend a fortune on microfibre cloths to remove all traces of your grubby fingerprints after the whole unsatisfying ordeal is over.

That’s why this weird looking upcoming laptop, purportedly from Lenovo, looks so interesting. According to the leaker Evan Blass, the picture shows a ThinkBook Plus and it makes good use of its bulky 17in frame by packing in a whole second screen, which looks like somebody has just left their iPad mini lying around.

A stylus is also in shot, and the fact that the ranther handsome parrot portrait is mirrored (or parotted, I suppose) on both screens suggests that Lenovo sees this as the perfect tool for graphic designers looking to finetune what’s on screen.

Laptops with second screens aren’t entirely new, but they mostly fall into the trap of making the second screen double up as a virtual keyboard, as if anybody who’s ever been forced to use a touchscreen keyboard for an extended period would want to make that their default way of typing.

This design, however, seems to maintain the full-size keyboard and a sizable trackpad — and it’s all made possible thanks to the ultra-wide aspect ratio of the screen. It doesn’t look like it will come cheap, but then laptops for creatives rarely do.

Blass didn’t reveal anything else about the product, instead proceeding to leak a whole bunch of other (less interesting) products from the likes of JBL, Royole and Asus, just to spread the annoyance of secretive internal PR teams far and wide. But given Lenovo unveiled the first two generations of ThinkBook Pluses at CES in 2020 and 2021, it seems pretty likely we’ll learn more at CES 2021, which kicks off on January 5. Watch this space.