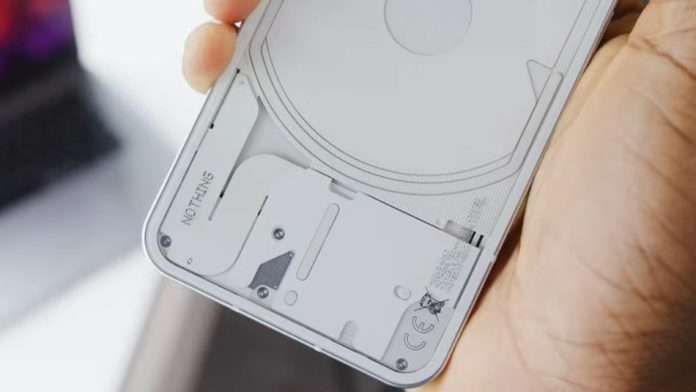 As predicted earlier this month, Nothing — the tech company created by OnePlus co-founder Carl Pei — has indeed revealed its first smartphone. Not that there’s much backslapping for guessing this — the clues and hints were about as subtle as a neon brick to the face, after all.

Anyway, we’ll get full details of the Nothing Phone (1) at its launch on July 12, but in the meantime the YouTuber Marques Brownlee has been given the handset early. In the video below, he shows that the handset’s USP — the transparent back so you can see what makes it tick — isn’t just aesthetically pleasing: it has added useful functionality too.

Y’see, the semi transparent rear also reveals a unique lighting system which will seem anarchic for fans of symmetry, but actually functions as a handy way of telling apart notifications.

While all of the LEDs can illuminate at the same time to grab your attention, they can also dance to a selection of provided ringtones. As these can be allocated to specific contacts, you’ll be able to tell who’s calling even if your phone is face down and on silent mode due to the pattern dancing around in front of you.

But it’s more than just that, which is just as well as I can’t remember the last time I heard a non-iPhone ringtone in public.

All the lights can also come on to perform as a fill light for photography and video in low-light conditions. If you are recording video, you’ll also have a red recording light to alert others that they’re being filmed.

Finally, there’s my favourite trick: when plugged in, the little exclamation mark shaped LED at the bottom will gradually fill up, giving you an at-a-glance assessment of how long you need to leave it plugged in for. This will turn off after a while, but can be reilluminated with a quick shake of the handset.

It’s a neat set of innovations in an industry which — let’s be honest — hasn’t been enormous for innovation in recent years. Whether it’s enough to convince enough people to buy the handset depends on the other specs, and its wider availability. We wouldn’t bet on this being one you can get in New Zealand, unless you’re prepared to play the importing game.