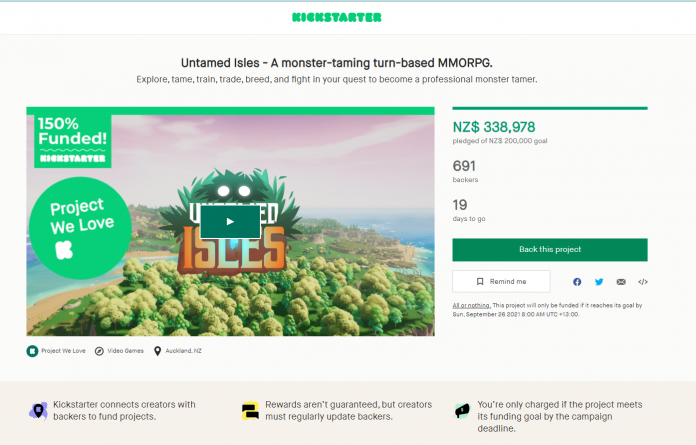 A Tauranga game development studio which began collecting pledges on Kickstarter ten days ago has smashed through its target in four days, raising over $NZ330,000 against a goal of $NZ200,000 – with 18 days still left to go.

Untamed Isles is a story-driven MMORPG, which means a massively multiplayer online role-playing game. In Untamed Isles, players are battling captive monsters against one another and get to explore, tame, train, trade, breed, and fight in their quest to become a professional monster tamer.

Most of the work was done by 10 artists/designers and eight programmers at Pyes Pa-based game development studio Phat Loot over the past year, and was built on game engine Unity. Achieving 150% of its fundraising goal means the Phat Loot team will add additional functionality and features to the game as it gets ready for pre-beta test players in October and beta testing in December.

Before founding Phat Loot in June 2020, Grant was CEO and co-founder of Channelfireball Group, which – among other things – trades Magic: The Gathering and Pokémon cards and has over 150 staff in the US, Australia, Ireland and NZ. Grant is also CEO and co-founder of BinderPOS, which offers digital sales tools for gaming stores.

Grant told theBit that Phat Loot is committed to using the funds to pay for “Dragging features forward to early access and driving up the quality of the game at launch.”

Telling the Kickstarter pledgers what’s going on is essential to the campaign, Grant said.

“I’ve been a gamer for a long time and been in business and done quite well and my biggest peeve has been open and transparent communication to consumers. So if we’re going to delay anything, we’re going to be very transparent about why.”

The Kickstarter campaign commenced on August 25 2021 and passed its $200,000 goal in four days. This is a vastly better outcome than many other indie game studios who might not achieve even a humble four figure investment. Game Daily’s last news story on the issue reported that of the 50 most-backed games on Kickstarter, 15 were not released by the date promised in their Kickstarter campaign.

Grant said he has personally invested money in several game studios and projects such as Chronicles of Elyria which “sadly didn’t materialise” and get their titles to market.

“Some of these indie studios are made of friends from university who might overscope themselves compared to the capability of their team. The difference with our campaign is I’ve run a software team for a few years now and we operate in multiple countries. I’m not new to business and not new to software. So we took careful considerations. We picked our first project to be deliverable.”

Untamed Isles will be launching on PC and Mac with open early access in December 2021 and will be purchasable through Steam.

The game has a ‘Play to Earn’ model thanks to a partnership with Direwolf which allows the use of a website blockchain marketplace with NFTs (non-fungible tokens). Ethereum is the first currency for the marketplace. Players are able to sell the accoutrements they have earned through hundreds of hours of gameplay.

“Most of the items and all of the monsters within the Untamed Isles can be tokenised and can be sold, bought, and traded on the website marketplace in addition to our in-game auction house, allowing players to earn while they play.”

The Kickstarter fundraising moved ahead in large strides partly because of the thoughtful donation tiers offered, which range from a humble $36 up several tiers to ‘The Lordship’ investment which allows the pledger to pay $NZ12,000 and receive

The accountability question – who is out of pocket if Kickstarter projects can’t go ahead?

Grant personally guaranteed on his Kickstarter he would pay pledgers back if the campaign falls over.

“We have a statement on Kickstarter saying I can sell shares in my other companies if need be. It’s a personal commitment to refund everybody if we don’t get the game out […] That’s to disarm people after other game studios have muddied the water [with unsuccessful Kickstarter projects.]”

There is nothing forcing a person running a campaign to repay money, Grant conceded. “They could likely chase it in court as its clearly advertised. [My motivation to guarantee pledges] would be more about me protecting my brand and image.”

Kickstarter’s Terms of Use require creators to fulfill all rewards of their project or refund any backer whose reward they do not or cannot fulfill and warns creators that a project whose backer’s refund you cannot fulfil “could result in damage to your reputation or legal action.”

Kickstarter says it cannot refund money if a project is unable to be fulfilled, however.

“Kickstarter doesn’t issue refunds, as transactions are between backers and the creator,” the company says. “In fact, Kickstarter never has the funds at all. When a project is successfully funded, money is transferred directly from backers’ credit cards to the project creator’s Amazon Payments account. It’s up to the creator to issue a refund, which they can do through their Amazon Payments account.” Kickstarter adds “Like PayPal, Amazon Payments allows refunds for 60 days from the date of charge. After 60 days, creators cannot reverse the same charge to backers’ credit cards, so to issue refunds they’ll need to initiate a new transaction to send money via Amazon Payments or PayPal, send backers a check, or use another method. Our support team has guided creators in how to issue refunds like these before.”
Kickstarter also says it can’t guarantee projects because “The pursuit of projects with a guarantee doesn’t work. A Kickstarter where every project is guaranteed would be the same safe bets and retreads we see everywhere else. The fact that Kickstarter allows creators to take risks and attempt to create something ambitious is a feature, not a bug.”
Creators are, however, required to list an “Estimated Delivery Date” for all rewards, and guidelines and requirements for Design and Technology projects require creators to provide information about their background and experience, a manufacturing plan (for hardware projects), and a functional prototype.