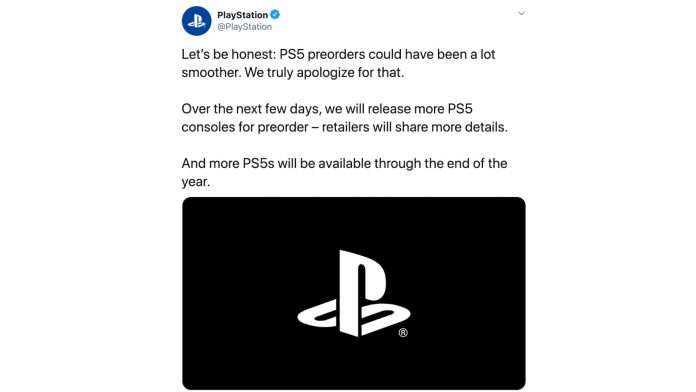 Sony sent out a Tweet on Sunday, apologising for the “mess” they’ve made with PS5 preorders. @PlayStation tweeted:

“Let’s be honest: PS5 preorders could have been a lot smoother. We truly apologize for that. Over the next few days, we will release more PS5 consoles for preorder – retailers will share more details. And more PS5s will be available through the end of the year.”

How did Sony mess up PS5 preorders?

Good question. Sony had originally ended its PS5 launch event saying preorders for its next-gen-console would start “as early as tomorrow”.

Then the Walmart twitter team happened. Tweeting “Make you wait to get the new #PlayStation5? Nah, that’s not like us. Go on, preorder it NOW!”

This was the epicentre of the chaos. Once customers saw that Walmart had jumped the gun, they began contacting their local/preferred stockist to get preorders in early, too.

Facing a wave of demand, silence from Sony, and a broken release date by Walmart, other retailers followed suit. In the US Target, Best Buy and GameStop all copied Walmart and jumped the gun too.

This caused some retailer’s websites to crash due to the demand. It also caused PS5 unites to sell out within minutes.

It’s still a bit confusing. Sony’s tweet saying “Over the next few days, we will release more PS5 consoles for preorder – retailers will share more details. And more PS5s will be available through the end of the year” is the only information that’s been shared.

How many more PS5 units will be released? What countries will get them? We’ll have to keep checking the @PlayStation Twitter account to find out, I guess.