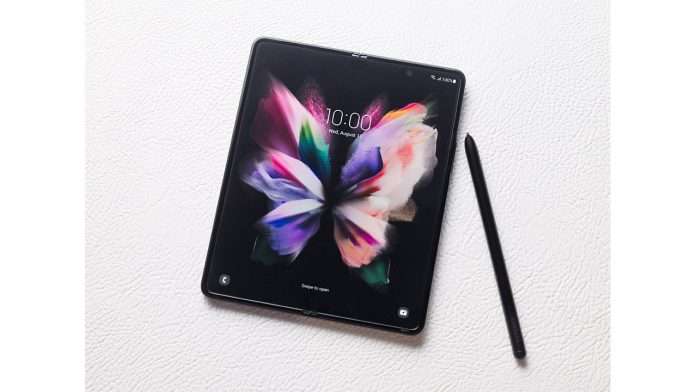 The Samsung Galaxy Z Fold 3 has gone down a storm with reviewers. While it’s undoubtedly easier to be positive about a phone that costs NZ$2,699 when you’re loaned the hardware free of charge, the consensus is that it’s a big improvement on the previous versions, and a step further along the road to foldables becoming the norm.

But there were two drawbacks highlighted by reviewers and, with a middle finger aimed squarely at said critics, it looks like Samsung will be doubling down on both with next year’s Galaxy Z Fold 4.

The first of these is the somewhat underwhelming under-screen camera on the unfolded handset. The intent was clear: make the tablet-sized canvas bigger by hiding the lens underneath some pixels. But the implementation was ropey, with the camera struggling to take decent snaps — which is understandable, what with all those pixels in the way.

Rather than chalk this up as a misfire and remove the feature altogether, South Korean leak blog Naver says that Samsung is planning on not only keeping the under-screen camera in the unfolded state, but adding an additional one to the front of the phone when closed.

Then there’s the S Pen, Samsung’s rather good stylus for note taking and doodling. The Samsung Galaxy Z Fold 3 supported this, but with no Note-style dock for keeping it when not in use. You were just expected to hang on to it — given the amount of biros the average human goes through in a year, does that sound sensible to you?

Samsung is apparently unmoved. Naver again reports that none of the prototype designs for the Galaxy Z Fold 4 feature a dock for popping your S Pen in when not in use. It looks set to remain an optional accessory then… until you invariably lose it down the back of the sofa, that is.

To be fair, for the Z Fold 3, you can buy a special case with room for the S Pen when not in use. But it does make an incredible feat of engineering look far more ugly than it should, so it’s not surprising these haven’t flown off the shelves.

Both of these Naver reports are listed as being subject to change, with the final design not expected to be confirmed until March. All the same, if correct, it does feel like Samsung is ignoring the Galaxy Z Fold’s minor faults in a display of bloody mindedness.