NZ’s Digital Strategy – have your say

NZ’s Digital Strategy – have your say 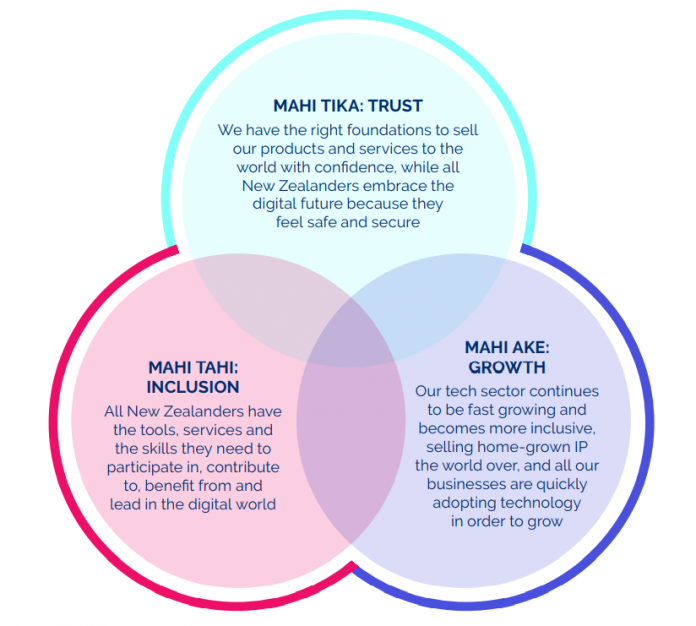 It may be a little late to the party – we’re one of the only countries in the OECD that hasn’t got around to it yet – but the government is developing a Digital Strategy and it wants to know your views.

The strategy aims to set out the goals, priorities and activities that will govern Aotearoa New Zealand’s digital future for the next 2 to 5 years, along with longer term results — out to 2031 and beyond.

As new technologies such as 3D printing, crypto, augmented and virtual reality, sensors, artificial intelligence, quantum computing and robotics become mainstream, getting this right is key.

In a country ripe with forward-thinking digital start-ups and a highly digitised and connected population it’s about time our government developed a future-focused strategy.

Not having done so earlier is costing us.

In this year’s Digital Riser Report , a report which measures countries across the globe on their digital transformations, New Zealand dropped 70 points – third to last in the region.

Surprisingly, top of the East Asia and Pacific region was Vietnam (around 400 points above us), largely due to its forward-thinking National Digital Transformation Program 2025.

As a result of these initiatives the government expects that by 2030, the digital economy should account for 30% of Vietnam’s GDP – in comparison NZ’s sector contributes around 8%.

The Trust pillar might be the most vital to get right; if we don’t trust the technology at our fingertips we won’t use it to its full capabilities, which then limits participation in those other two pillars.

At present the Trust pillar involves a range of government agencies – from MBIE, Te Puni Kokiri, the National Cyber Security Centre, Stats NZ, CERTNZ and others.

In light of the slew of cyber attacks on government and private businesses over the last few years and the increasing distrust, by some, of any government-led digital initiative post-pandemic, getting this right is key.

A good start might be to simplify the number of government agencies under a single umbrella, that can act swiftly as issues arise.

The upcoming digital vaccination passport/certificate will be a bellwether app in this regard.

Both offer exciting advances to businesses but, as of now, there is little to regulate their role in NZ.

In the US, some courts are using AI to decide on the sentence of criminals, and other everyday decisions involving insurance and employment are also based on AI.

Such decisions never enter the “human” realm, with little transparency as to how the decision was made and why, causing some in the sector to call for a set of standards governing digital provenance.

I wrote here about our government’s ongoing work on a digital identity legislation which aims to open that space up to private players, enhancing convenience and allowing users to trust their data is used responsibly. At the moment the current NZ legislation is fragmented and doesn’t offer a trusted way of interacting with a wide range of organisations.

There are other government initiatives in this space already – a voluntary code that governs algorithms for government organisations for example and a cybersecurity strategy but, again, no sustained, overarching strategy to tie all these disparate, but interconnected, issues together.

It’s estimated that a successful digital inclusion strategy could deliver over $1 billion a year to the New Zealand economy.

So far, despite many programmes aimed at tackling the divide, many feel alienated from the digital revolution.

A pre-pandemic Citizen’s Advice Bureau report released in 2020 noted that many of the clients it deals with are stressed and frustrated and feel excluded in their attempts to engage with government services. Many older clients felt shut out of key online processes.

“The experience of many people is that the digital transformation of government services is not putting people first, but rather is putting digital first,” the report found. “This means that people who are already vulnerable and are negatively impacted by social inequality are at risk of being further disadvantaged. A clear example of this was the digitisation of aspects of our social welfare system and the resulting barriers some people face when they are told to apply online, or to use MyMSD, when what they really need is time with another human offering face-to-face support.”

While there’s been more progress on the growth pillar and significant government investment in the sector through Callaghan Innovation, the Research and Development Tax Incentive scheme and the Industry Transformation Plan – the challenge the tech sector faces in the sector is a human resources one.

“We’re losing talent to overseas companies and the salaries are tough to compete with. The current situation is the highest amount of movement since the 70’s, so it’s definitely a problem affecting everyone in the sector.”

While welcoming the digital strategy, NZTech chief executive Graeme Muller, points out that without education and immigration changes, growth in the sector faces an uphill battle.

“Since 2018, New Zealand’s digital competitiveness has gone backward due to issues with the ability to hire foreign labour and the lack of graduates with digital tech skills, New Zealand is not adapting fast enough.

“Until the government acknowledges the importance of being able to get critical international digital skills into New Zealand, we will continue to slide backward. Productivity will get worse not better, income taxes will decrease as high paid roles continue to be shifted out of New Zealand, the algorithms that govern many aspects of our lives will lack cultural relevance and ultimately life will get harder for many more people as the years go on.”

If the pandemic has accelerated digital adoption and kept many businesses running it has also found our government wanting in some areas, and tardy in implementing a broad, unified digital strategy.

Still, it’s better late than never. Let’s hope the final result will be more than a feel-good set of principles and that the government takes the time to listen to our currently struggling tech sector has to say.

Want to wade in? Don’t leave it too long – you only have until November the 10th to email them to [email protected]