theBit.nz
HomeNewsMicrosoft to try its hand at phones again with the Surface Duo...
News 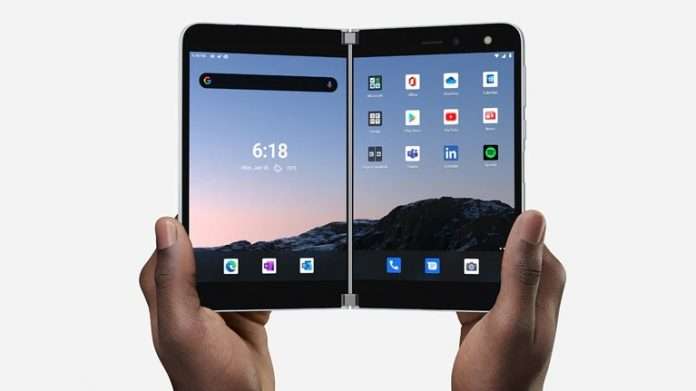 You’ve got to hand it to Microsoft: it’s tenacious, refusing to take ‘no’ – or, more accurately, ‘meh’ – for an answer. The company is set to be back with a second stab at the Surface Duo smartphone, according to a new listing on Geekbench.

After the Windows Phone operating system started life with a whimper and ended life with an even quieter one in 2016, Microsoft backed off from smartphones for a while, until last year when it released the Surface Duo: an Android powered foldable.

Well, sort of foldable. Unlike Samsung’s new foldables, the phone actually had two screens separated by a hinge. “Surface Book” would be a more appropriate name, given the way it opened up, if Microsoft didn’t already have a 2-in-1 laptop with that moniker.

The Surface Duo also failed to capture the imagination, in part due to Microsoft’s incredibly optimistic pricing paired with slightly stingy specs. The Qualcomm Snapdragon 855 processor that powered the handset was over a year old by the time the phone was released: still fast, but a bit of an insult considering the NZ$2,699 price tag.

We have no idea if Microsoft has returned to planet Earth with the pricing this time around, but it does at least seem to have fixed the specifications. According to the Geekbench listing, the phone will ship with a Qualcomm Snapdragon 888 processor – the same one found in all of Samsung’s 2021 flagships from the S21 to the Galaxy Z Fold 3 – and include a solid 8GB of RAM.

The listing states that it’s running Android 11, which perhaps suggests a release isn’t too far off, as you’d imagine it would be running Android 12 if Microsoft were planning a launch later in the year.

Anybody hoping for a radical new look will be left disappointed. A few weeks ago, images of a near-complete unit leaked online showing the same somewhat boxy build, albeit with a new triple-lens camera.

It’s what’s on the inside that counts, though, and Windows Central has learned that Microsoft is making a few key improvements, including added NFC, a larger battery and bigger screens with a higher refresh rate.

All promising, but much will still come down to pricing. With Samsung aggressively cutting the price of its foldables, Microsoft will have to do similar to be competitive and it’s far from clear that the company understands this. If it sells for the same NZ$2,699 as last time around, then it seems likely that most people will sensibly opt for the more refined Samsung Galaxy Z Fold 3 for the same price.

Facebook
Twitter
WhatsApp
Linkedin
Previous articleNews Partner Programme launched by Apple (not for NZ, though)
Next articleWhy Apple should care about silly superstitions