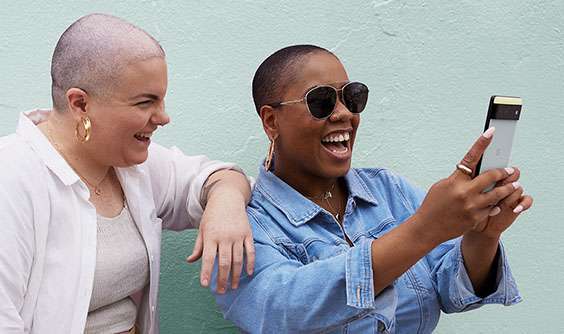 Lifestyle photography plays a unique role in tech: it shows you how a strange and alien product might exist if you owned it.

Here it is resting on a table next to a coffee! Here it is on a beach, slightly dusty from sand! Here it is in the hand of someone considerably more attractive than you’ll ever be! Except… maybe you would be that attractive if you owned it? Buy it now and find out!

This week, prolific tipster Evan Blass leaked pictures of the Pixel 6 in these familiar looking poses, and others have pointed out the interesting things you can see about the phone’s UI…

…and the return of the Pixel Stand charger.

They also remind people that in order for your phone to charge, it helps if the plug is attached to a socket.

But for me, the pictures seem to perform a very different function to normal: getting people used to that enormous raised runway that Google calls a camera.

The thick visor running along the back of the phone is… an acquired taste, and very different from what’s available on every other handset on the market.

Being different is tricky, and while you or I may not care what others think about the car we drive or the phone we use, others most definitely do. The Pixel 6 is trying to pull off that difficult trick of looking distinctive, but distinctive and cool, rather than distinctive and weird.

Can it manage this? I’m not sure. There’s definitely precedent for companies normalising strange looking products, as anybody who remembers the public’s initially horrified reaction to AirPods will know.

But as I’ve argued elsewhere, Apple is one of the few tech companies with the power to actually make people overrule their senses over what looks silly. Google’s history in this area is considerably less assured. That’s why you don’t know anybody still wearing Google Glass. Or if you do, you should probably stage an intervention.

The Pixel 6  is considerably less dramatic, of course, and if its strange camera leads to amazingly detailed pictures, then nobody is going to argue too much. But my hunch is that tech nerds (myself included!) will eat this up, and the rest of the world will bank on something more normal looking. Probably with the word “Galaxy” in it, or with an Apple logo prominently displayed on the back.