theBit.nz
HomeNewsIs this what the next generation of Samsung foldable will look like?
News

Is this what the next generation of Samsung foldable will look like?

08/01/2022
0
0
HomeNewsIs this what the next generation of Samsung foldable will look like?
News

Is this what the next generation of Samsung foldable will look like? 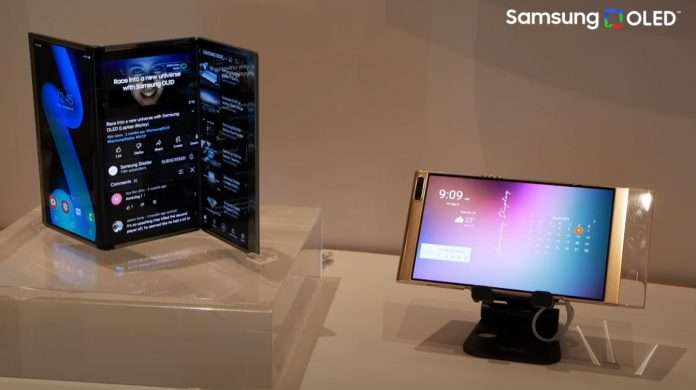 Samsung has made it pretty clear that it views foldables as the future whether refuseniks such as myself like it or not. And at CES 2022 the company has hinted that its ambitions may not end with the Galaxy Z Flip 3 and Z Fold 3’s designs.

At its booth, Samsung showed off no fewer than four different expandable screens. They’re all concepts for now, but concepts can eventually evolve into commercially available products, so let’s take a quick tour of what Samsung was demoing for those who braved the latest Covid wave to attend CES in person.

The letter on each signifies how the phone’s panels fold. The Flex S comes in two forms, both of which make an ‘S’ shape, though one has a transparent layer so that part of the internal screen is always visible even when closed.

The Flex G folds into itself in a ‘G’ shape to close, which has both a positive and negative knock-on effect from a design point of view. It’s inherently weaker because the phone can only be used when open, but on the plus side it does mean that the (presumably delicate) screen is always protected when stuffed into your pocket or bag.

After that admittedly strong start, the concepts become a bit more tenuous. Take the Flex Note, for example, which is a 17-inch screen that folds in half to close like a laptop.

That means you can sensibly use it as an extra screen, or less sensibly as the world’s most uncomfortable laptop. As a writer, the very idea of typing anything longer than a WhatsApp message on a virtual keyboard fills me with dread, personally. I suppose it beats carrying a spare screen around with the delicate panel exposed — but I’m not sure how many people have that particular problem just waiting to be solved.

Finally there’s the Flex Slidable, which replaces the folding mechanism with a panel that extends, like another pair of concept phones yet to be released: the Oppo X 2021 and the LG Rollable. The latter of these is very unlikely ever to emerge, given LG has officially quit the smartphone game.

Regardless, this is Samsung’s concept and… it’s a bit underwhelming. Is the company’s justification for a new mechanism really just the ability to switch between apps? Because if it is, I’ll just stick to swiping up, thanks.

True, I’ll no longer be able to see what’s on screen while I decide what to open, but that’s hardly an issue if I’m looking to switch apps anyway. Plus an extra mechanical element is another thing that could break down over the lifetime of the device.

But again, these are just proof of concept devices and there’s plenty of time for Samsung to refine designs and find a purpose for the form factor. At the very least, it’s good to see that it appears Samsung is sticking with foldable screens for the long haul.