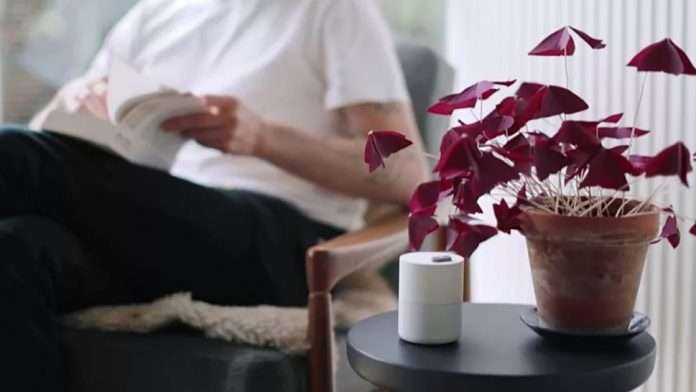 Phone notifications are annoying, but they’re kind of meant to be. Without fingers to politely tap you on the shoulder, really the only weapons in the phone’s arsenal are beeps and vibrations. Or, if you’re an iPhone user and you really want to irritate everyone in your immediate vicinity, you could switch to the clown horn sound.

Google thinks there may be a better way, and has teamed up with London based Map Project Office to design six smart home devices that draw your attention in a more natural way without needing to vibrate your pocket at all.

Called Little Signals, you can build all six of them for yourself if you like, so there’s no need to wait for Google to incorporate them into a bit of Nest smart home kit. But if you do, you perhaps shouldn’t be surprised if you do miss an important message, because it feels like something of an overcorrection: a notification so subtle that you might literally blink and miss it.

Take ‘Air’, the most interesting of the devices. It’s a cylinder that can expel a small puff of air when it wants your attention. The idea is not that you’ll feel it creepily breathing down your neck, but that it might disturb nearby plant leaves as a way of raising the alarm. Kind of like you’ve got a benign and helpful ghost telling you to check Twitter.

Then there’s ‘Shadow’: a mushroom shaped cylinder that moves upwards casting a shadow when a notification arrives. It can be programmed to pulse with a breathing pattern if that sounds too easy to miss.

‘Button’ is similar, in that it too rises upwards, but the shape means it doesn’t cast a shadow in the same way. Instead, when it reaches the top it will play a tone if you haven’t noticed it vying for attention.

‘Movement’ also relies on, well, movement. It has nine holes containing pegs which pop out in a pattern to tell you things. Google says you can get it to “graphically represent information like a calendar or a timer” with this motion, but doesn’t specify what this might look like in practice, or beat the Gregorian calendar that’s done a pretty good job for the past 400 years.

Then there’s ‘Tap’: my personal favourite due to the passive/aggressive feel of it. Tap has a stick attached to it that will gently knock on a surface when it has something to say. It can be set to tap more firmly for more urgent notifications, if you like.

Finally, there’s ‘Rhythm’, which is a more traditional notification system: it just plays a programmable melody. The twist is that you can silence it with a wave of the hand, or by turning a removable piece upside down.

There’s no doubt all of these are interesting and may lead to a calmer home, muted from the usual beeps and plips of notifications. But there’s a reason that Batman gets attention with a giant bat signal across the night sky, and you kind of get the impression that if he’d relied on Little Signals for a message from Commissioner Gordan, then Gotham City would have even more of a crime problem than it already does.

If that doesn’t put you off, you can download the designs to build yourself here.