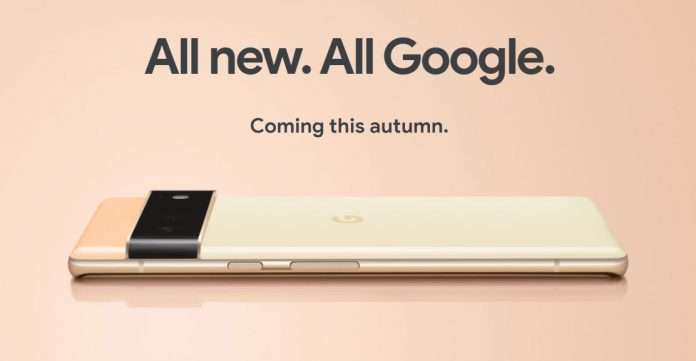 Either Google has decided to go big on transparency for the upcoming Pixel 6, or whoever runs the @madebygoogle Twitter account has gone rogue. Given the slightly cloying, emoji-laden, chummy tone of the tweets, I’d wager the former.

First things first, it seems that the leaks were correct, and Google really is going with the wrap-around visor look popularised by Geordi La Forge on Star Trek the Next Generation for the Pixel 6. No wonder they’re all face down in the second tweet’s accompanying picture, or you’d likely see how awkward they look resting on that unusual camera bump.

Google also confirmed that the company has followed Apple in developing its own SoC. Called Google Tensor, the company says that the main appeal is its ability to process artificial intelligence and machine learning models right on Pixel 6 and Pixel 6 Pro handsets. This will apparently mean a “transformed experience for the camera, speech recognition and other Pixel 6 features.”

Given the Pixel family of phones already offered some of the best photography around, that’s pretty exciting. But if you really care about making the most of your Instagram snaps, you’ll probably want the Pixel 6 Pro, as it features a 4x optical zoom.

“#Pixel6 has the same great cameras as #Pixel6 Pro, just no telephoto” writes the @madebygoogle account, showing how little it understands hashtags. We’re leaving telephoto to the pros, you could say,” it added, using a winking emoji to end the sentence, rather than the more traditional full stop.

Speech recognition is a slightly more niche path to pursue, but it does make a kind of sense when you think about where the company has been going with Google Assistant, the real-time translation function of Pixel Buds and the dictation app of previous Pixel phones. And it seems that’s where Google is going with this. “Google Tensor allows us to make big leaps in voice commands, translation, captioning & dictation,” the account tweeted.

Google closed the Twitter thread with the promise that the Pixel 6 will have the “most layers of hardware security in any phone” and that it’ll arrive this fall – which is Autumn, if you don’t speak American.

You can sign up for more details and look at high resolution pictures on Google’s new teaser site here.