For some reason, Facebook thinks you’ve been craving VR meetings

For some reason, Facebook thinks you’ve been craving VR meetings 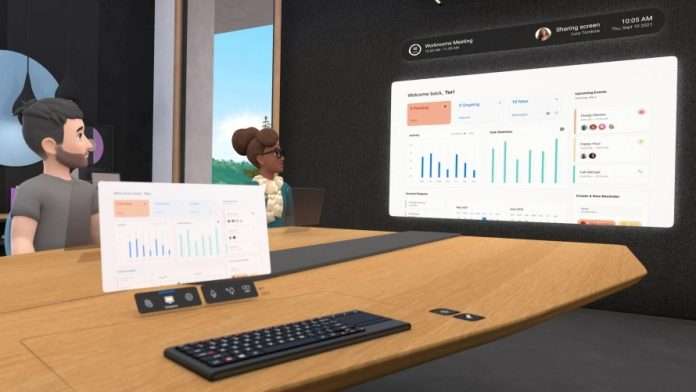 Yesterday, a CBS tweet caused all manner of speculations as it promised a “special announcement about the future of Facebook.”

The announcement may as well have been that the people that control the company have collectively lost their minds, because that was the subtext of what was actually announced: virtual reality meeting rooms.

I could explain the horror of Horizon Workroom with words, but you get a better idea by watching Mark Zuckerberg’s creepy bulge-eyed avatar do it for me in the app itself. Here he is explaining the concept with wild gesticulations, as the person behind him seems to struggle with a dislocated wrist.

You and up to 15 colleagues can sit together in a virtual meeting room when you can’t meet up in person. There’s even a shared whiteboard for brainstorming, which you can write on with a virtual pen. Just like a real whiteboard… only far more fiddly and less practical.

If you don’t have a VR headset of your own, you can just dial into the call by video, which is probably an even more disconcerting experience as your real life form enters the cartoon world, like Bob Hoskins in Who Framed Roger Rabbit?.

The thinking seems to be that Zoom meetings – still the norm around the world as coronavirus makes remote working preferable – are a poor substitute for the real thing. That’s hardly a controversial point of view: they’re isolating and lack plenty of the social cues that make actual in-person meetings work due to audio lag and technical issues.

The question is whether putting on a NZD$699 VR headset will fix any of those problems, or worse, magnify them. Short of being able to make offensive gestures at the other meeting attendees in 3D, it’s not really clear what advantages being in VR offers.

Facebook believes that much of the awkwardness of staring at colleagues over a webcam will be averted if your brain is tricked into thinking you’re in a physical space with them. And the company says it’s been using Horizon Workroom internally for meetings for some time, so it is at least putting its money where its mouth is.

I could almost get behind the cartoony avatars as a way of making people feel less self conscious about being watched in their homes, but weirdly Facebook doesn’t even try to prosecute this argument. Instead it merely says that the avatars “offer a huge variety of customisation options and feel more expressive and natural, helping you feel like you’re really there with your colleagues.”

I’ve not been in the office for nearly two years now, so I may be misremembering, but I don’t think my colleagues looked like rejects from a Pixar audition.

But perhaps the biggest reason for my scepticism is this: I have an Oculus Quest 2 downstairs, and I’m halfway through Half Life Alyx, which I started months ago. I would have finished it by now, if putting on the VR headset weren’t just enough of a faff for me to invariably turn to the PS5 instead.

And if I can’t be bothered to put on the Quest 2 for one of the most critically acclaimed gaming experiences of the last decade, then what hope do I have of putting it on to take part in a virtual meeting with boggle eyed replicant versions of colleagues? I’ll stick with Zoom, thanks.