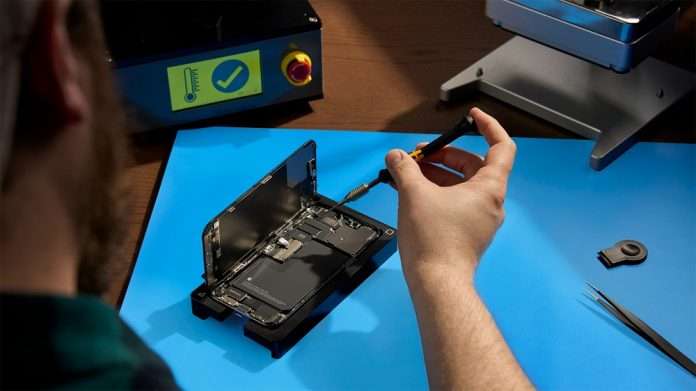 Last year, Apple changed the habit of a lifetime and decided that it was all for users being able to repair their own iPhones and Macs. This was, to put it mildly, somewhat unexpected, given just the week before it wasn’t even letting third-party repair shops fix iPhone 13 handsets without breaking Face ID in the process.

Now in a whiplash-inducing u-turn, the company has decided that any Tom, Dick or Harry can do the honours — well, as long as they’re in America anyway. The self-repair website is now live, though the global roll out is being staggered, presumably so that the company’s support lines aren’t overloaded by people suddenly calling up and asking which end to hold a screwdriver by.

To begin with, three generations of smartphones are supported: iPhone 12, iPhone 13 and the brand new 2022 iPhone SE, meaning there are parts for nine handsets in total once the various mini, Pro and Pro Max models are accounted for. Just select the handset and then pick the part you need from a drop-down menu: batteries, speakers, cameras, displays, SIM trays and Taptic Engines are all available.

The price of repair, unsurprisingly, varies dramatically from part to part. A SIM tray is a wallet-friendly US$7.20 (~NZ$11), whereas the display for an iPhone 13 Pro Max will still leave you resenting the company a bit with a price tag of US$311.96 (~NZ$476). The bigger operations will qualify for a modest rebate if you ship the dead part back to Apple, but we’re only talking US$33.60 (~NZ$51) off said screen repair, so if you do choose to celebrate, you’ll probably be shopping in the budget champagne section.

The company will even loan you a repair kit if you don’t want to buy very specific tools yourself. Apple being Apple, this isn’t free: it’ll cost you US$49 (~NZ$75) for a week’s rental, but it will at least be shipped out free of charge (or more accurately, they’re taking it off the rental cost).

For now, it’s just the three generations of iPhone, but Apple says that Mac computers featuring Apple Silicon (i.e: M1 and newer) will follow later in the year. “Later this year” is the same estimate Apple is giving on the self-service system expanding beyond America, too. Apparently Europe is the next destination, but hopefully New Zealand is somewhere on the list if you’re struggling to read this on a very cracked iPhone screen…