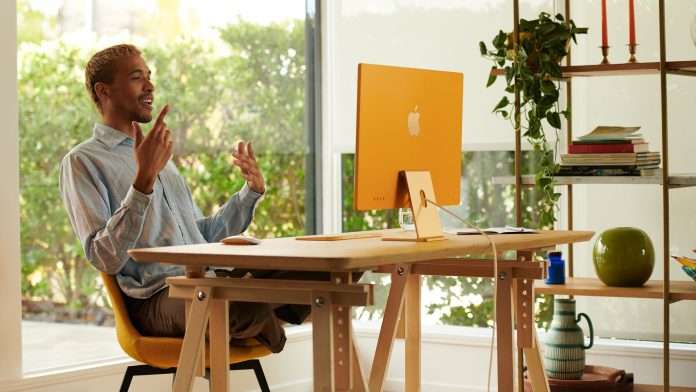 A lot happened at Apple’s Spring Loaded event. We saw new AirTags, a “reimagined” iMac, an updated iPad Pro and Apple TV 4K device, a new Apple TV remote, an announcement that subscriptions are coming to the Podcasts app, and the biggest news of all, Ted Lasso Season 2 has an official release date. Oh, and you can also get the iPhone 12 in purple now.

Hooray! Apple used its stage to announce the thing most of us have been most excited about. The release date for its charming soccer-based (football-based) TV comedy, Ted Lasso.

The new season will return to Apple TV+ on July 23.

Apple has been threatening (rumoured) to launch its item-tracking AirTags for about two years. The wait is over. They’re finally here.

Customers can personalise AirTag with free engraving, including text and a selection of 31 emoji, when purchasing from apple.com/nz or the Apple Store app.

Once AirTag is set up, it will appear in the new Items tab in the Find My app, where users can view the item’s current or last known location on a map. If a user misplaces their item and it is within Bluetooth range, they can use the Find My app to play a sound from the AirTag to help locate it. Users can also ask Siri to find their item, and AirTag will play a sound if it is nearby.

Each AirTag is equipped with the Apple-designed U1 chip, enabling Precision Finding for iPhone 11 and iPhone 12 users. This can more accurately determine the distance and direction to a lost AirTag when it is in range. As a user moves, Precision Finding fuses input from the camera, ARKit, accelerometer, and gyroscope, and then will guide them to AirTag using a combination of sound, haptics, and visual feedback.

If AirTag is separated from its owner and out of Bluetooth range, the Find My network can help track it down. The Find My network uses data collected from nearly a billion Apple devices and can detect Bluetooth signals from a lost AirTag and relay the location back to its owner. Apple stresses that this all happens in the background, anonymously and privately.

Users can also place AirTag into Lost Mode and be notified when it is in range or has been located by the vast Find My network. If a lost AirTag is found by someone, they can tap it using their iPhone or any NFC-capable device and be taken to a website that will display a contact phone number for the owner, if they have provided one.

AirTag can be purchased in one and four packs for just RRP NZ$55 and RRP NZ$189, respectively, and will be available beginning Friday, April 30.

The old Apple TV remote got a lot of hate. Apple has listened and come up with something that mashes together the inputs from an old iPod, a traditional D-Pad, its previous TV remote and Siri. The new Siri Remote supports

Clickpad control that offers five-way navigation for better accuracy,
Touch-enabled for the fast directional swipes Apple TV users love.
The outer ring of the clickpad supports an intuitive circular gesture that turns it into a jog control
Siri

Best of all, the new remote is compatible with the previous-generation Apple TV 4K and Apple TV HD.

The new Siri Remote is available separately NZ$89. Preorder starts on Friday, April 30, with availability beginning in the second half of May

Podcasts app to get in-app subscriptions

The Podcast app hasn’t really changed much in its 15-year of existence. But now, at a time when competition is heating up from Spotify and Amazon in particular, Apple has taken action by introducing in-app Podcasts Subscriptions.

Creators will have to pay Apple NZ$27.99/year to offer subscriptions inside the Podcast app; Apple will take a 30 per cent cut of revenues in the first year and 15 per cent in the years thereafter.

Apple Podcasts Subscriptions will be available from May.

iPad Pro gets the M1 chip

Both iPad Pros have a new 12-megapixel ultrawide camera that can automatically track you during video calls.

The “completely redesigned” iMac with an M1 chip

The iMac has been completely redesigned. It has a 24-inch 4.5K Retina screen, a 1080p FaceTime camera and is powered by the M1 chip also.

The M1 iMac starts at NZ$2,149 for the 7-core GPU model and it available April 30, shipping in the second half of May.

…the same chip the iPhone XS, XS Max, and XR had. What does this mean for the Apple TV 4K? More power, essentially. In real terms: you can now support HDR (High Dynamic Range), and Dolby Vision video at 60fps. You can also AirPlay content from a compatible iPhone with Dolby Vision at 60fps.

The new Apple TV 4K will be available starting at RRP NZ$299 beginning Friday, April 30, with availability beginning in the second half of May.

Calibrate Apple TV with your iPhone

The iPhone 12 is now available in purple…