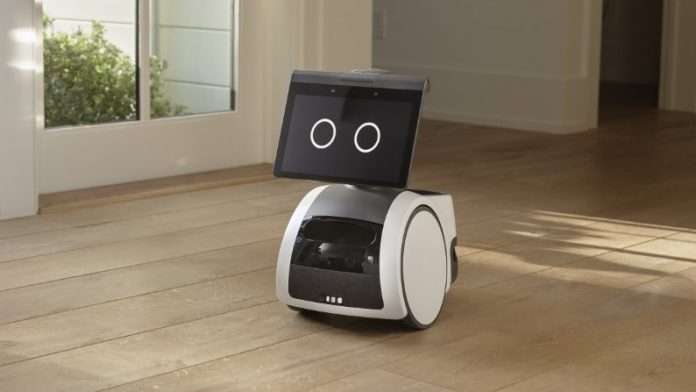 If you’ve ever looked at your Echo Show and found yourself saying “gee, I wish that had wheels”, then Amazon has answered your slightly unusual prayers. Meet Astro, Amazon’s first robot for the home.

Whether awkwardly hanging out with friends in the kitchen…

…Astro is there to make your life that bit easier.

Or that’s the theory anyway. Given it doesn’t have any arms, it can’t do the laundry or muck in with the washing up, but it can do anything Alexa can, including showing up with notifications, or following you around for video calls on the move. It also has a couple of cup holders, so at least it can carry your drinks, even if it can’t mix a mean mojito.

“I’ve had this robot in my home for about a year, and it does so many delightful things,”explained Amazon’s Dave Limp, introducing Astro at an event this morning. “Even in homes as Alexified as mine, there’s still lots of things my home can’t do because my devices are stationary. This robot changes all of that: with a live view in the app, you can send it to check on specific rooms, people, things or even pets.”

Given Amazon sees much of its use as a robotic night watchman, you may think its short stature would be problematic. But that’s why a camera can pop out of its head using an improbably long periscope.

Other than the whole lack of arms thing, its main drawback is that, like robot vacuum cleaners, cows and Daleks, it can’t use stairs. So you’d better hope that any burglars enter the home through the ground floor, otherwise Astro won’t be much good (at getting pictures of the perps, you understand: Amazon didn’t mention any on-board weaponry for vigilante action.)

Don’t expect Astro to be coming to New Zealand any time soon — in fact, it doesn’t sound like it’ll be going much further than a limited number of homes in the United States.

It will only be available via invitation, and buyers better have more money than sense, because it will set them back US$1,499.99 — or around NZ$2,160 — though early adopters will be able to get it for a slightly less offputting US$999 (~NZ$1,438) when it goes on sale later this year.